I have a Pyrometer datasheet showing signal percentage (0 to 100%) with the corresponding respective temperatures (from 0 to 200 °C) and current values (from 0 to 20 mA) in the whole measuring range. 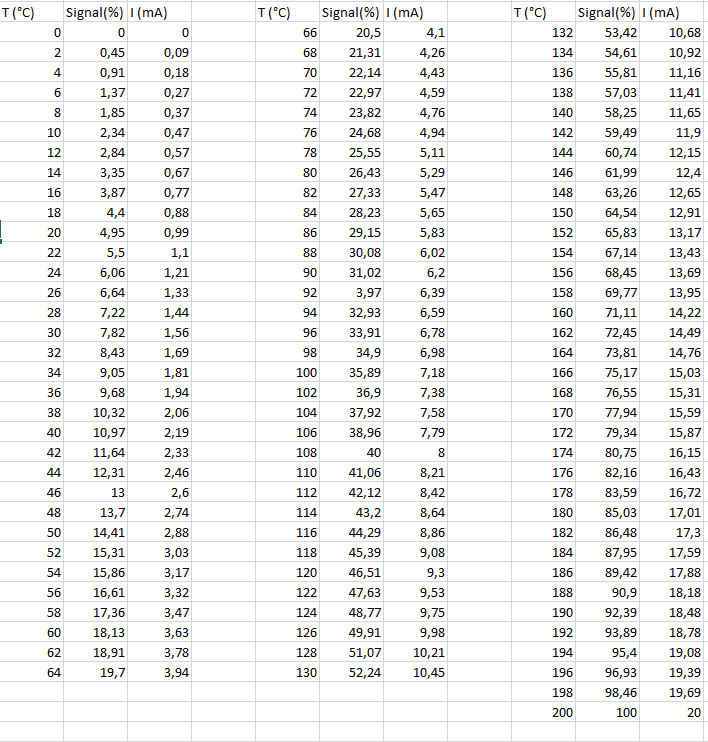 Practically, I get the Pyrometer signal output as a voltage which I want to convert into temperature by using the above data. What is the procedure to do this?

You have a table with 100 values in terms of temperature. It's clearly nonlinear to some degree (not insanely so over that range).

There are many ways to go about that. One is to find a polynomial of some degree that minimizes the least-squares error for each point. If the power is less than 100 you'll have some error, and generally the whole thing will get more numerically unstable the higher the degree. You could try fitting a polynomial of reasonable degree (say up to about 8) and see how well it fits with the points and how it behaves between the points.

One method that uses more storage but is typically very numerically stable is to use cubic splines where the result is a smooth (differentiable) curve that passes exactly through each of the given points and behaves reasonably between them.

The optimum method will depend on the computing resources available and the required bandwidth and the required accuracy. Since the variable is temperature, the bandwidth is likely rather low, and since the numbers are only given to 4 digits probably the accuracy isn't all that demanding either.

MATLAB (curve fitting toolbox, ideally) which is very much not free, or one of the free programs with similar capabilities (Octave or Scilab) is an easy way to proceed and you can easily find how to do it with the search terms provided. You can even use Microsoft Excel in some cases.

Note that numerically poorly conditioned algorithms can have unexpected results since you end up coming with a result that subtracts almost-equal large numbers from each other, and truncation or rounding can affect the results cosmetically or even materially, so be sure to check the algorithm carefully before deploying it.

I'm assuming you're using a microprocessor.

The output pin of the pyrometer will have to go through a resistor to ground to turn current into a voltage, and your processor will then measure this voltage over the resistor. Let's assume your processor works of 3.3V. Then the maximum output of the pyro should result in 3.3V, which means your resistor should be

Then, you use your processor's ADC to measure this voltage. The ADC's output will come in digital format, let's call this digits. Let's also assume your ADC is set to 10bit. Then the voltage measured by your processor will be:

To turn this into a temperature you will have to work it back:

Not the answer you're looking for? Browse other questions tagged sensor signal data or ask your own question.

2
Tips about signal strength metering with percentage
2
Amplifying signal from CO2 Sensor
3
Expanding Range Of Analog Values From Temperature Sensor
2
The options for communicating sensor data in a medium size building
1
How do I drop 19VDC from a 0-60VDC source to get an accurate linear 0-48VDC signal
1
Type J Thermocouple Signal Conditioning to 0-5V
0
How to find the actual measurement range of a temperature sensor, HTS221?
2
How to read data from this sensor?
0
Getting unexpected I2C Slave Address from a LSM9DS1 sensor and reading the wrong data from the register I just wrote in
0
Sensors - How to convert 4-20mA output to temperature and pressure values?