I'm working with two RFID readers in my circuit and an arduino to control both of them. The whole thing is powered by a very cheap wall-wart Power supply at 12V which is rather noisy to begin with. And a 7805 Voltage regulator to drop the voltage to 5V for the arduino.

Therefore I'd say, the decoupling is done porperly. However sensitivity aka read range is 5mm with the wall wart. Now if I use my bench-top Power supply (Peaktech 6150, not even an expensive one) read range is around 55mm. The same effect can be had when connecting the scope to the circuit and using the wall wart. So I'd conclude it is not a problem with the noisy wall wart but rather a problem with the grounding as the bench top PSU and the Scope are probably connected to earth(?) and thus provide a "harder" ground I guess? 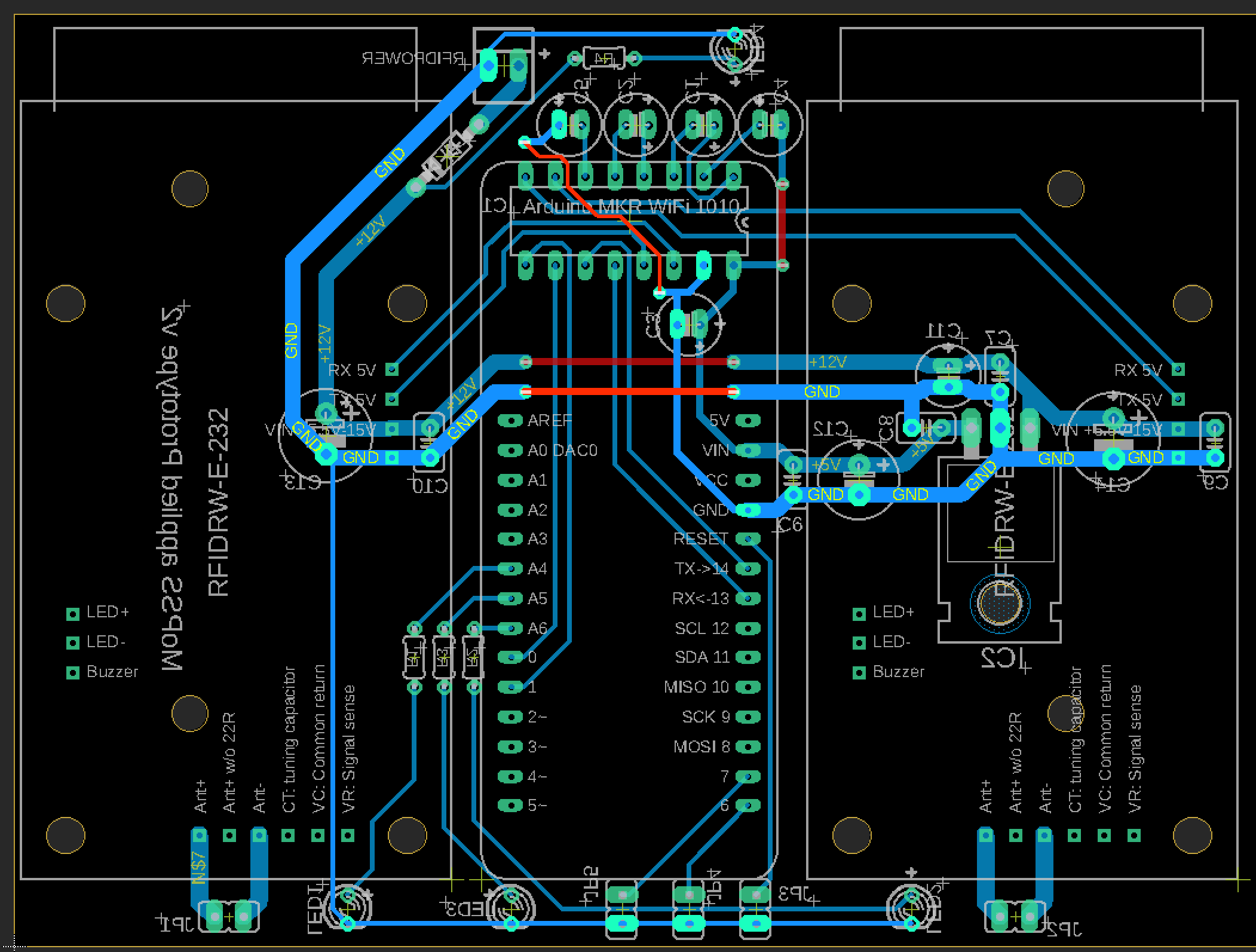 Update: Using a scope to probe the 0V or +12V (and any other point) with referenece to the scopes GND, revealed that there are two major components of common mode noise: 355V Pk-Pk @ 50Hz from Mains 10V Pk-Pk @ 125kHz from the antenna-drivers (same frequency).

Probing the +12V point with reference to the 0V on the PCB shows 140mV Pk-Pk @ 1kHz which I belive to be the switching frequency of the wall wart. Superimposed I can still observe some noise from the antenna driver at the same 125kHz but now with the scopes earth/gnd connected it's around 4mV Pk-Pk. Which is sufficently low to bring the read range up to where it should be.

Solution (sorta) An accepted solution would be the use of a pre-made power supply with DC 0V connected to PE directly or via Capacitor. Or some other means of grounding the 0V line. However as Andy aka points out, it would be better to take a look at the susceptibility and source of the noise as this is just a fix for a non-ideal circuit.

Therefore I'd say, the decoupling is done porperly. However sensitivity aka read range is 5mm with the wall wart.

That assumes that the common mode AC voltage on the DC output of the wall wart is very low. It hardly ever is and the AC content is wiggling around at the low to mid hundreds of kHz. That's the switching frequency on the primary inside the wall wart leaking through to the secondary and wobbling both DC outs up and down together. It may be a few tens of milli volts but it can be enough to upset things.

This output common mode noise of the wall wart can be alleviated (and usually is) by having a class Y/X rated capacitor from the DC output to the rectified DC line voltage on the primary. Many suppliers of WWs use this technique but it comes with a problem.

That problem is a significant AC voltage at mains AC frequency on the DC output - it's harmless of course but, if the target load (your device) is not grounded then it's being shaken up and down by several tens (to hundreds) of volts p-p at mains frequency.

This will inject unbalancing currents into your load and potentially upset this or that. Hard to be definitive but it can (and does) happen.

So, my guess is that the decoupling isn't done properly OR your layout is a little flaky and is thus susceptible to unbalancing currents. Hanging a scope earth on the load 0 volts can be usually enough (in many cases) to solve this problem. Using a bench power supply that has probably got decent common mode (to ground) filters on the DC output can be enough too.

Of course, the wall wart might be just generating too much differential AC voltage at its DC output and this would be the place to review first. If it looks OK then use your o-scope and look at the WWs output voltage with respect to earth - each wire at a time and see what you see.

Not the answer you're looking for? Browse other questions tagged grounding rfid or ask your own question.

9
Read RFID tag with NFC reader?
9
What can I do to increase passive HF RFID read range?
0
Increasing the range of a UHF RFID reader
1
Grounding dc project to clean RF noise
0
How does RFID reader reads a passive RFID tag?
0
How to handle 2nd USB and Audio ground in a project powered from isolated 5V Wall Wart
0
Increase range of 125khz RFID Reader
0
How to mitigate common mode noise introduced by the (LF) RFID antenna driver (on un-earthed SMPS)