I don't understand enough about uC outputs or even this (probably very simple) MOSFET circuit to understand if this is all completely expected, or pointing to some faulty component? 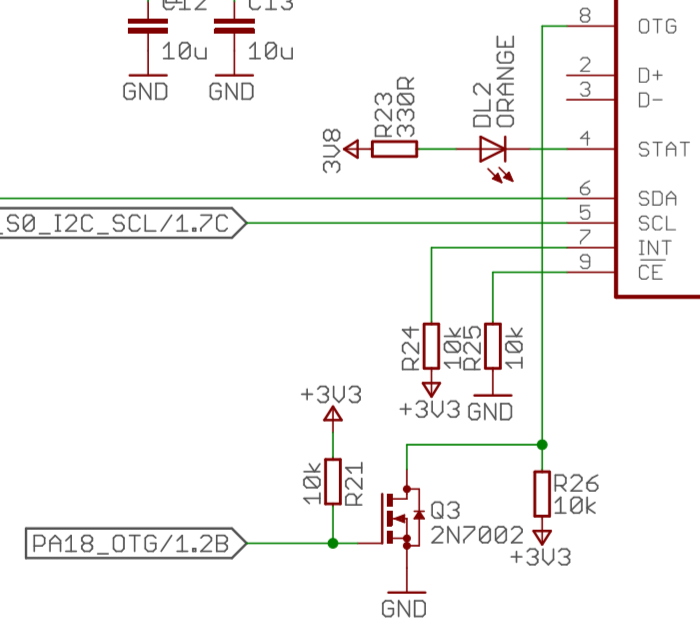 You're building an inverter with the 2N7002 and that's a perfectly fine design choice. You're driving Q3-gate to logic 0 which happens to achieve 0.3V instead of the expected 0.0V. That in itself should not be an issue. But the low voltage at Q3-Drain doesn't make sense at -0.1V, i.e. it's not inverting.

First, verify that OTG (pin 8) is configured as an input and is not itself trying to drive the pin low. Remove Q3 and measure the voltage on Pin 8. It had better by high. It's high, right?

Another possibility is that the 2N7002 is blown. These are gate-oxide devices and can easily be blown by ESD when assembling the circuit.

Before you install the replacement 2N7002, with Q3 removed, measure the voltage at PA18_OTG while you drive it low. Did it change from 0.3V to something closer to 0.0V? If so, mystery solved. If not, then the only explanation I can offer is that the R21 is presenting enough of a load to the PA18_OTG driver to keep it from reaching 0.0V. Either way, that's not your problem.

Now, replace the 2N7002. Make SURE you have the pinout correct and are using the correct part.

Not the answer you're looking for? Browse other questions tagged arduino microcontroller mosfet or ask your own question.

8
How do I drive a TRIAC from a microcontroller (for low voltages)?
5
Does a logic-level P-MOSFET need a gate resistor?
1
Help driving 9V circuit with a 5V RTC clock interrupt pin (active low)
3
MOSFET switch using an optocoupler
1
Comparator output not fully switching on MOSFET
0
Understanding n-MOSFET specs
0
“Amplify” LED-Controller to handle higher currents
0
P Channel MOSFET is not behaving with another MOSFET
2
Big voltage drop across MOSFET with LED strip load