Why would an incandescent bulb produce a bright flash when burning out?

A typical way of an incandescent bulb to burn out is with a bright blueish flash and often an audible sound and (very rarely) an explosion of the bulb glass.

Since a filament breaking in a gas-filled bulb can form an electric arc, which may spread between the terminals and draw very heavy current, intentionally thin lead-in wires or more elaborate protection devices are therefore often used as fuses built into the light bulb.

But it's unclear why an arc would spread and cause very high currents.

Why would it not burn out silently instead?

TL;DR The electric arc may conduct much higher current than the filament, this is not normal mode of bulb operation so you can see a flash and maybe even have the bulb exploded.

While the bulb is working current flows through the supply wires and the filament. Filament resistance is what limits the maximum current.

While the filament was intact the maximum current was initially limited by the filament resistance and there was no way for the current to flow other than through the entire length of the filament. If an electric arc starts then this limitation is no longer true - current can flow through the ionized gas and the length the arc can span is limited by the power supply voltage. This allows the arc ends to travel from the broken filament ends to the supply wires and no longer limit its current by the filament resistance. Once the arc starts it ionizes the surrounding gas and so that gas can conduct current too which allows for much higher currents than the one initially flowing through the thin filament. The current is now limited by the supply wires resistance.

This causes rather intensive arc which produces a bright flash and sometimes makes the bulb explode.

This is why you need a fuse inside the light bulb (near the socket). If arc develops then current through the fuse gets much higher and the fuse is melted and then the circuit is broken and the arc stops. If the fuse fails to melt fast enough you may have a circuit breaker tripped.

As the gap widens the amount of voltage needed to sustain the arc increases, until the arc extinguishes itself.

If there is a current increase, it is probably because the tungsten filament has crossed over and shorted. I did have a light bulb that the filiment broke and still lit up for a few minutes, but was several times brighter because the filiment crossed over and made the total path shorter. If the arc shorted any part of the tungsten filament then this would also create a current increase due to the shorter pathway.

Below one can see a graph of what it takes to sustain an arc. As the distance increases the voltage increases also. (its actually a pressure distance product, but the pressure in the bulb will be fixed for the most part). 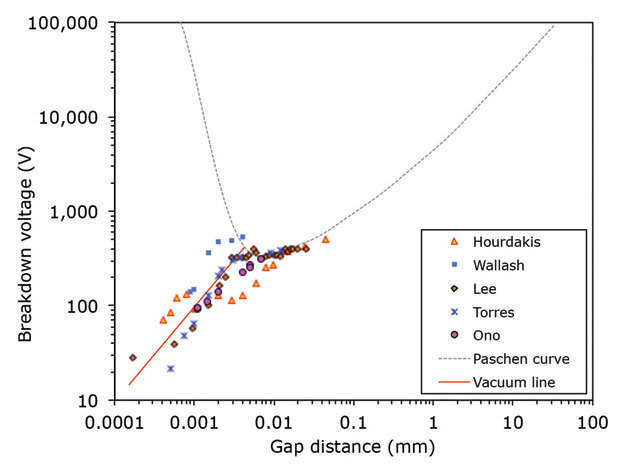 Why would it not burn out silently instead?

Sometimes they do (I've had a few just die, unexcitedly) , but if there is a gap, initially there will be arcing.

Not the answer you're looking for? Browse other questions tagged failure lamp incandescent or ask your own question.

4
What makes an incandescent light bulb run out?
1
Is there a good physical model for what happens when a light bulb suddenly goes out?
17
Light bulb burns out — why there is an arc in the switch?