Behzad Razavi in his book mentions

It is important to bear in mind that small signal analysis deals with only (small) changes in voltages and currents around their quiescent values.... If the signal perturbs the bias point of the device only negligibly, we say the circuit operates in the small signal regime. So the change in Icq due to the signal must remain small.

However when we study about maximum symmetrical swing we look to bias it by the middle of the ac load line.. So the if the collector bias current is Icq then the maximum swing too is Icq. But.. How then is the change in Icq, small, due to application of signal????? How do we specify the small signal regime of operation?

I'm going to answer your second question first: we call something "small signal" when it is small signal enough for our purposes. No matter what, electronic amplifiers distort. You can't get rid of it -- you can just work harder and make it smaller. So if you're involved in a structured design process, you decide ahead of time how much distortion you'll accept, and you design (and test) to that.

This distortion may be expressed as THD if it's an audio amplifier, or some sort of intermodulation distortion if it's RF, or as a total nonlinearity error if it's some sort of measurement device (presumably going into an ADC). I'm sure there are other measures that I'm unaware of -- but they all boil down to answering the question "is this amplifier linear enough?".

For your first question, I'm going to be self-indulgent and use a load line for a pentode (vacuum tube) amplifier rather than a transistor. I hope it doesn't confuse things too much, but I just like tubes. The principle is the same though -- you could replace the tube characteristic with a MOSFET or even a BJT and get essentially the same thing.

This effect is even more pronounced with transistors, which is why tube amps can often get by without feedback. 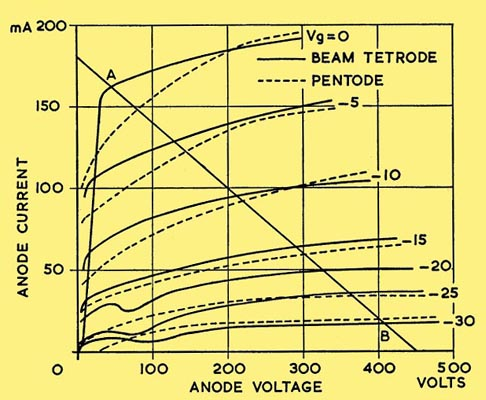 How then is the change in Icq "small? due to application of signal????? How do we specify the small signal regime of operation?

"Small signal" and "large signal" do not represent different "regimes of operation". They are two different analysis techniques used to evaluate the design of a circuit, and they are used in unrelated areas.

Large signal analysis is used to determine things like bias points and maximum output swing. Small signal analysis linearizes the circuit so that other aspects such as frequency response are easier to estimate.

"Negligibly" is a term defined by what you do with the device. There can't be a general answer!

How do we specify the small signal regime of operation?

The definition depends on the application.

The small signal regime is when we operate the system with small enough signals that the error we get by using small signal analysis, rather than full nonlinear analysis, is not "too much". "Too much" means more error than we can accept for whatever purpose we are using our analysis or simulation results.

So the if the collector bias current is Icq then the maximum swing too is Icq. But.. How then is the change in Icq, small, due to application of signal?

The reason we chose to bias the transistor with the collector current in the middle of the load line is so that we could achieve the maximum swing without causing large non-linearities due to entering the saturation regime of the transistor.

As long as we don't see the large non-linearities due to saturation, the response might be "close enough" to linear for many purposes. There will still be some small non-linearities that result in small(ish) harmonic distortion of our signal, but these might not be important for determining the output amplitude or the highest frequency our circuit can pass, for example, to an acceptable degree of accuracy.

Not the answer you're looking for? Browse other questions tagged amplifier bjt small-signal quiescent or ask your own question.