Why is this potentiometer and comparator circuit not working?

I'm quite new to electronics and I'm afraid I'm missing some basic knowledge. (also please forgive me if I'm not always using the right terminology)

I'm trying to use a potentiometer (R1 in the schema below) to divide input voltage and divide it between the two other terminals. The idea is that when the wire to comp1 has almost no resistance, the LED1 will light up. When moved to the other end, LED1 should be unlit when the voltage drops to a theoretical 4V (that's what the voltage divider connected to both V- terminals of the comparator is for). When the voltage for comp2 is higher than 4V, LED2 should be lit.

When I create this on my breadboard, none of the LEDs will light up, no matter how I position the wiper of the potmeter.

What am I doing wrong? Is it wrong to use the 5V for both the Vcc of the comparator and the "logic voltage" for its pullup resistor? 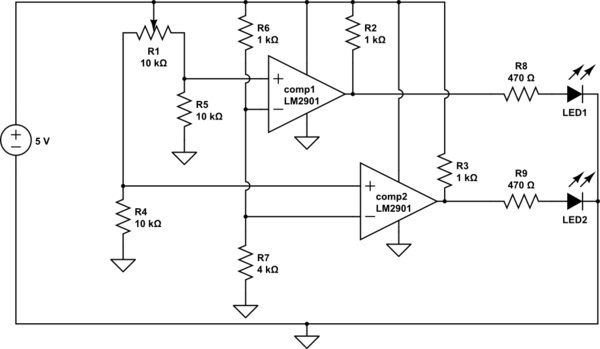 I implemented this circuit as follows: 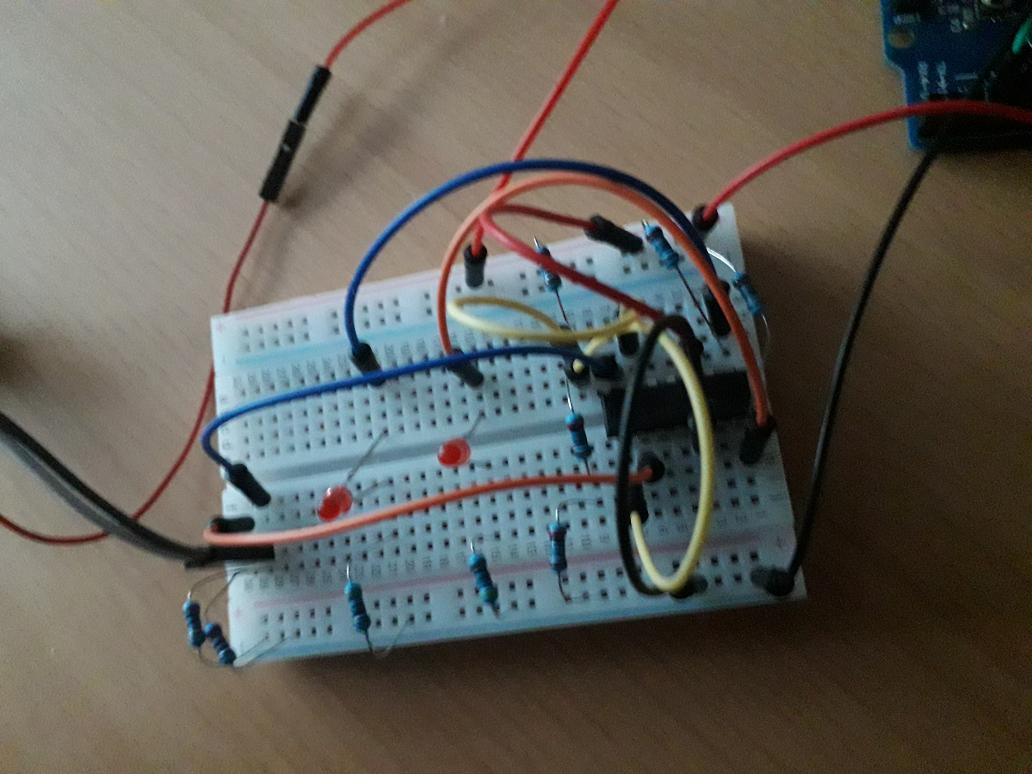 (btw I see I've placed the resistors "after" the LEDs, but I don't think that would make any difference in this case?)

Looking at the Electrical Characteristics of the LM2901, I see that the common-mode input voltage range is 0 to Vcc-1.5 volts. You have the negative inputs at 4 volts, or Vcc-1, which is outside the recommended operating range. The comparators are not guaranteed to work correctly when the common mode voltage is within 1 volt of the positive supply.

Try changing R6 to 2K, and R7 to 3K, to bring the common-mode voltage within the legal range.

Post a photo of your (tidy) breadboard implementation and we'll see if we can spot an error.

Just out of curiosity, why can R8 and R9 be eliminated? I thought the LEDs would draw too much current without a resistor?

Figure 1a should be clear enough. The LEDs would come on in the opposite way to your design but this could be solved by swapping the inputs.

Figure 1b should be clear enough with the equivalent circuit using SW2. When SW2 is open the D4 LED current is limited by R4 so there is no need for the additional resistor above D4. When SW2 closes D4 is shorted out and so it goes off. The downside, as mentioned earlier, is that R4 is now passing more current than it was while the LED was lit (because the full supply voltage is across it now).

Or does the comparator limit the current somehow?

No. Hopefully this is clear now.

Not the answer you're looking for? Browse other questions tagged potentiometer comparator or ask your own question.

2
Is there a clever way to prevent a window comparator from oscillating?
1
Where am I going wrong with the comparator in MSP430?
0
Comparator - Short circuit indicator. Possible to design a bi-color LED version?
1
Regulate high current LED light with potentiometer (voltage regulator or voltage divider)
0
Potentiometer terminals not working?
21
Why does this comparator not output a square wave?
1
Driving solenoid valve using LM358 as comparator and ULN2003
0
Extremely simple OpAmp comparator circuit not working
0
LM393 comparator how to use?
0
LM393 comparator only connects to GND