Should we include Source and Load Impedance while calculating two port parameters?

While calculating the \$Z\$, or \$Y\$ or \$h\$ parameters of a two port network, should we include the source impedance and load impedance or not? In other words, for finding \$Y_{11}\$, we short the second port, my question is should we short the \$V_2\$ or replace it by its internal impedance? For example, in the following question, 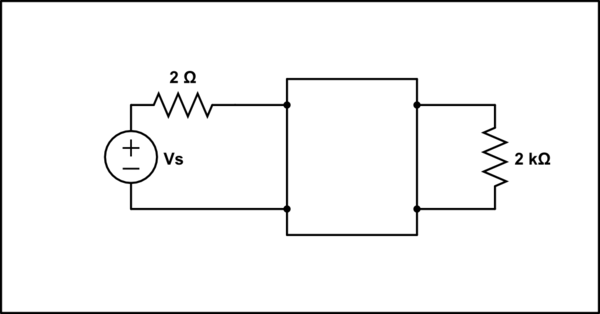 Are the h-parameters given in the question, found out by including the \$2\Omega\$ internal impedance or without including it? Rather, how those specified parameters would've been found out initially? Does one two port network have only one fixed parameter (for Z, Y, etc)?

you shouldn't, the whole point of a two-port transformation is that you can use the simplified model and connect sources/loads as you see fit and see how it behaves regardless of source and load if you add the load to the parameters you would have to uncouple it from the equations every time you get a new load.

So I would leave out the impedance of the source and load out of any h/y/z or whatever parameters you are getting.

Not the answer you're looking for? Browse other questions tagged circuit-analysis impedance passive-networks internal-resistance or ask your own question.