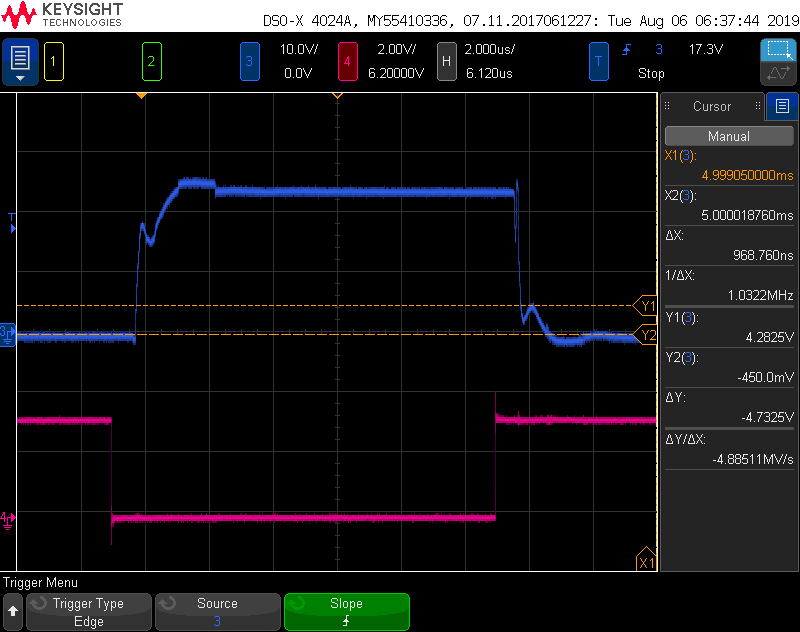 As you can see, the output is not a nice square wave but has weird behavior on the edges.

I tested other brushed DC motors with the exact same setup and did not see this at all. In fact, it was a perfect square wave as expected. So from that, I was able to conclude that my driver setup was correct and the problem was related to the brushed DC motor load (inside of the linear actuator). I took apart the linear actuator and noticed that the specific one I was using had three 0.1uF capacitors soldered to it (one in between the motor terminals and one from each terminal to ground). As I understand, this is commonly done to prevent the arcing of the brushes from causing noise. The other ones did not have these capacitors. Once I removed the capacitors, everything worked as expected, so it seems the capacitors are causing issues with the PWM drive.

However, since the capacitors are internal to the linear actuator and the company says they are necessary for CE compliance, I can't remove them. My questions are:

A rough calculation gives me a two very tiny inductors in range of 2 to 5 micro henries. Without a motor connected, omitting the cable capacitance, then supposing you have 2 x 2.2uH and those three caps of 0.1uF you get:

The resonance frequency does not need to be very far away from your PWM frequency, 30kHz would be good enough.

Doing tests you can protect the motor/cable/caps/driver from overvoltage with fast diodes. This will prevent the oscillations building high voltages.

Not the answer you're looking for? Browse other questions tagged pwm dc-motor brushed-dc-motor or ask your own question.