I am trying to get a better understanding for RAM and Flash and I hope you could help me out with some things.

What I know about Flash (or at least I think to know), is that there are different Flash structures. With structures I mean NOR and NAND Flash e.g.

Independent of the structure I can store data in the Flash. I know there are some differences between NAND and NOR Flash like density if I understand it correctly but I am still not understanding when NOR Flash should be used and when NAND Flash should be used. What are the advantages of the structures and would it be an issue if I would replace a NOR Flash in a system with a NAND Flash that contains the same data for example?

What I know about RAM is that it's way faster then Flash and once the power is turned off its memory is "erased". That's it. Something that I am especially wondering about is if there are different RAM structures, too? Does something like NOR or NAND RAM exist?

Flash: NOR and NAND

Both NOR and NAND flash use a floating gate to store data. The difference between them is a trade-off of density and speed vs. reliability. 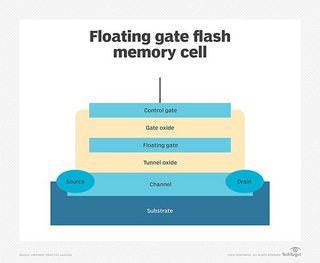 NOR has slow write times and fast read, with endurance of about 100,000 read/write cycles. It does however have long retention and high read reliability, because it uses large floating gate cells, making it suitable for nonvolatile critical storage, such as boot code. It also supports random read access, much like an EPROM or EEPROM.

NAND has roughly equal read/write times. Like NOR flash, NAND has limited endurance, ranging from about 50,000 cycles for SLC NAND, to as low as 5,000 for TLC NAND. It uses much smaller storage cells than NOR to achieve the increased speed and density. But this comes at a cost of endurance and reliability. As a consequence, NAND requires error correction and wear-leveling to mitigate this shortcoming, making its use more complex. SD cards and eMMC for example include a controller to implement these functions; bare NAND relies on an external SSD controller as either a separate chip or as software on the host processor.

This ECC and wear-leveling overhead, and the block-oriented nature of NAND flash, add considerably to its access latency, which is tens of microseconds compared to tens to hundreds of ns for NOR flash.

Now, what's this business about Flash endurance? Remember that both NOR and NAND use a floating gate to store information. The floating gate is erased and set by injecting a higher voltage to force the gate to the desired state. This hot carrier injection eventually wears out the gate, to the point where it will no longer reliably store a '0' or '1'. NAND floating gates are smaller than NOR, so they need less time than NOR for the erase / set operation. But this also means they are less durable than NOR.

RAM has two major types today: static RAM (SRAM), which uses a latch-type structure per cell, and Dynamic RAM (DRAM) which uses a capacitor per cell.

DRAM has high read and write throughput and no endurance limits. It has a multiplexed address and a two-step access process (row, then column) and so favors block-oriented access due to its latency. It also requires that the cells be ‘refreshed’ from time to time to retain their contents, and also to be written back after reading. This is because the capacitor used to store charge will leak off with time, and is also discharged when it’s read.

SRAM has a non-multiplexed address; access is in one step. So not only does SRAM have high thoughput, it has low latency. As it doesn't require refresh or write-back it can potentially be low power, too, although like any logic, power is often traded off for speed.

Both SRAM and DRAM are volatile, losing their contents if power is lost.

A slow SRAM can use almost no power when idle, and can be made nonvolatile with a standby supply like a battery. Fast SRAM will have more leakage power consumption - you would find this type used as CPU buffer or cache memory for example. DRAM can be placed into a power-saving self-refresh mode, but will still consume some power even when not in use.

Where Do You Use Each Type, And Why

Each type has a trade off.

On the horizon are potential replacements for Flash, SRAM and DRAM. These include MRAM, which uses magnetic ‘spin’ to store bits, and ReRAM which uses a new circuit element called a memristor to store bits. Both are nonvolatile and static (not needing refresh). So far neither has met the performance or cost of flash or DRAM in commercial application, but work continues and holds promise to revolutionize memory architecture.

Trouble is that you usually cannot get a NAND and a NOR flash with the same data interface or protocol. In other words, the existing system won't know how to access the new chip properly.

And you really don't want to talk to raw flash directly, as e.g. SD cards are actually cheaper than (tested) raw flash chips that store the same amount of data.

Depends highly on your application - how much data you need and how often you will write to the flash, and which granularity you require (erase block size). Oh, and which interface you'd want to use in order to talk to the flash chip.

Not the answer you're looking for? Browse other questions tagged memory flash ram nand-flash or ask your own question.

5
Difference between RAM and internal storage chips in HTC Sensation
3
Serial NOR Flash - Vague
10
Why must flash memory be written/erased in pages/blocks?
13
Flash and RAM : Code Execution
6
Why are NAND flash and NOR flash named using the terms NAND and NOR?
0
Fundamental reason why RAM is faster then second storage device
0
What exactly is meant by 'CompactFlash' in the context of flash memory?
0
Do the RAM modules use Flash as the USB keys and SSD?