Where will the grid-tie power go if it's not connected to the grid? [duplicate]

What will happen to the extra power that the grid-tie inverter is producing if the demand is less than what the load needs?

I have this planned system that I will be implementing soon. The good thing about connecting the solar panel to the grid-tie inverter is that there is already a built-in MPPT in it, eliminating the need for a solar charge controller. However, I am a bit concerned on what will happen to the extra power that the grid-tie inverter is putting to the system if I am disconnected to the grid e.g. black out and I'm using my off-grid inverter to power my house. 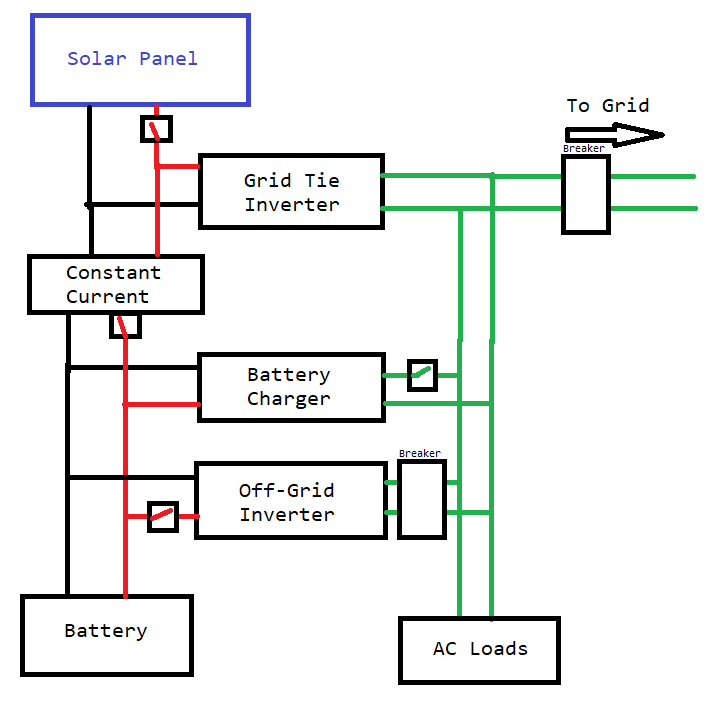 This is actually a problem, during a blackout the grid tie inverter will still source power, but it probably won't be enough to power the loads (houses) around you and will send current back out to the line and cause problems:

First and foremost is the technical reason. The electronics that control a solar system constantly adjust voltage and current to keep the panels operating efficiently as the sunlight changes. To do this, the system produces quantities of power that aren’t dependent on how much your house is actually using in a given moment. In a grid-connected system, any excess power is put back onto the grid for others to use, and your utility credits you on your bill for that power.

Solar power output varies directly with sunlight levels. So, even if you disregard the need for efficiency, connecting this variable resource directly to your home’s electrical system would cause your lights to blink, damage your refrigerator, and wreak havoc on your computers and television.

The second reason that solar shuts down during a blackout is safety.

During a power outage, the power utility sends out repair crews to find and fix the points of failure. Linemen and women will be jeopardized if there is a local power generator (like a solar array) leaking power onto the grid lines. Therefore, utility rules mandate that in the event of a power outage, solar arrays must automatically shut down. Solar systems have detectors that sense whether power is coming across the grid, and whenever grid power is down, they automatically shut down too, to protect utility workers.

For this reason most (but not all) grid tie inverters don't source power when the grid goes down. There are some that can detect grid faults and disconect the building power from the grid during a blackout.

Not the answer you're looking for? Browse other questions tagged inverter power-grid or ask your own question.

3
how grid tie invertor works?
0
Solar panel system with as minimal reliance on the grid
2
How do grid tied inverters interrupt grid voltage
1
how to design a microgrid
0
Can grid-tie inverters charge UPS batteries if connected to the UPS output?
0
Whats the difference between a grid tie dc ac inverter and a normal dc ac inverter for 12 v or 24 v batteries?
1
Can a double conversion UPS energize grid-tied micro inverter solar array during power outage?