Why is it not possible to create electricity by forcibly putting electrons into the system and closing the loop?

Why is it not possible to make a device operate by forcibly putting electrons into the system, closing the loop, and having electron repulsion do the job of making charge flow?

Making electrons flow is what creates electricity. So if we are able to put electrons into a system, close the loop so the electrons have no where to go, then the electrons would be constantly bouncing around together. This would cause charge to flow around and create electricity.

Making electrons flow is what creates electricity. So if we are able to put electrons into a system, close the loop so the electrons have no where to go, then the electrons would be constantly bouncing around together. This would cause charge to flow around and create electricity.

You're getting lot's of things wrong here.

That term is a relic from the past when people didn't know much about current, voltage and other macroscopic electrical quantities. Let alone electromagnetic theory. That term can be used correctly only in non-technical/scientific contexts or only in the vaguest of sense. In other words: you don't measure "electricity", you measure a bunch of well-defined physical quantities related to electrical phenomena.

From a technical point of view, what you call "electricity" in the sense of "some kind of energy that allows us to do stuff" is called "electrical energy" or "electrical power".

Currents can generate power only if they flow through a system that is able to draw energy from them. The electrons have to lose energy to provide power to the "outside world". In other words, they must travel across some sort of potential barrier. In technical terms, if the electrons moving from point A to point B are to generate power, there must be a voltage across those two points (point A must be at a lower voltage than point B, in particular).

In this scenario electrons, even if moving, wouldn't be able to generate power, because any point of a perfect conductor is at the same potential. So there is no voltage drop, hence no power.

Of course I have neglected lots of additional problems that arise when you consider the true nature of electrons, which are not tiny weeny balls of matter, but quantum particles to which classical reasoning cannot be applied coherently.

BTW, it has already been hinted to by others in this thread that you can have a continuous flow of current in a ring-shaped superconductor body. The electrical resistance is virtually 0 and the electrons don't lose energy while moving (ideally). There have been experiments in which such a "circular current" has been maintained for days (IIRC) without further external energy provision.

Remember: energy in nature cannot be created. It can only be transformed from a form into another. This is called the Energy Conservation Law and it's a basic principle of the Universe that no validated scientific experiment has ever been able to disprove.

Any time anyone has "witnessed" phenomena that violated that conservation principle, it has been established by scientific analysis that the phenomena were observed without taking correct measurement into account or that some other experimental mistake has been made (assuming there wasn't bad faith and the phenomena were not part of a scam).

Truly scientifically proving that the Energy Conservation Law is not universally valid would be a discovery worth a couple of Nobel prizes!

That is in effect what a voltage source does: It force electrons through a system if there is a closed loop.

Or going to a more abstract layer: You need energy to force electrons through a system. In effect you are using energy to generate electrical energy. It all comes back to the law of conservation of energy.

if we are able to put electrons into a system, close the loop so the electrons have no where to go, then the electrons would be constantly bouncing around together.

What you describe is more like static electricity. We can pump a lot of electrons in an object and then isolate it. The electrons may move around a lot but that does not create energy.

This is exactly like saying why can't I create water pressure if I just start the water flowing in pipes and then connect them into a circle. The water will flow but eventually the resistance in the pipes will slow the water down to a stop. Same thing with regular wires, the voltage will be lost.

However, if you use a superconductor, the electrons will circle forever. But it won't give you more energy, only allow you to store it.

What you are not taking into account is the resistance and the loss of the system. There are no ways to classically create or destroy energy, only convert it or store it.

Why is it not possible to make a device operate by forcibly putting electrons into the system, closing the loop, and having electron repulsion do the job of making charge flow?

You have just created a charged body, the charge will distribute based on the geometry of the object and then stop. No more current. You've got static.

Figure 1. When an object is charged the charges do not always spread equally over its surface. With a round shape they are evenly spread but with a pointed shape the charges are always concentrated around the point. Source: School Physics

So if we are able to put electrons into a system, close the loop so the electrons have no where to go, then the electrons would be constantly bouncing around together. This would cause charge to flow around and create electricity.

No it wouldn't. Electrons are moving all the time anyway but their average movement is zero.

We have a device that does this, I suppose: A Van de Graaff generator. You may have seen one before: 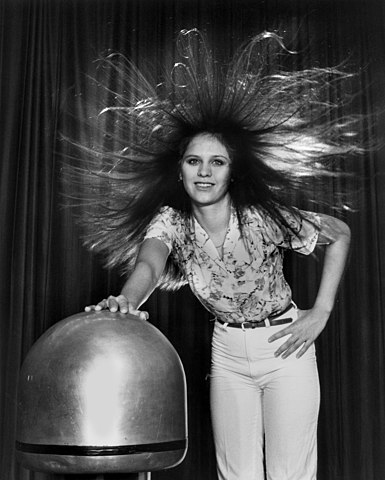 Perhaps what you are missing is a rigorous definition of what you mean by "electricity". In most electrical devices (like toasters, cell phones, and elevators) we use mobile electrons (in metals like copper and metalloids like silicon) as a sort of "fluid" to perform work at a distance. It is not unlike a closed hydraulic system.

Putting an excess (or deficit) of electrons in a body simply makes a charged body, like the woman in the above picture. The repulsion between like charges can do some interesting things, like make one's hair stand on end. But since they've nowhere to go, no work is performed.

6
How does current flow through a voltage source?
8
How does electricity produce heat, and where do the electrons go?
0
How the Current Flows in a Car?
15
Why is there no net current in a wire without a voltage applied?
1
Combine 2 outputs from a single powerbank to increase current for driving leds and controller
0
ESP8266 (esp-07) powered by battary(s) for at least 1 year
4
Confusion about conventional current and electron flow and how it runs through and powers a circuit
1
Current flow with a potential difference