I'm building an oscilloscope with arduino, but I have some questions about how to design the input voltage dividers without ground.
The problem is the oscilloscope only needs one input to measure voltage, but as far as I know voltage is a comparison. So how can the oscilloscope measures voltage without comparison? 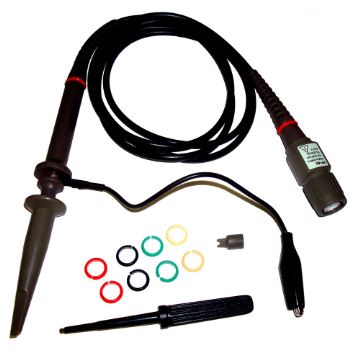 Problem is oscilloscope only needs one input to measure voltage ...

No, your hunch is correct. All voltage readings require a reference point so a ground reference is required as well. This is typically the ground of the circuit under examination.

A typical probe uses a coaxial or screened cable with the probe tip connected to the centre conductor and an optional ground clip connected to the screen. (That's the little crocodile clip in Figure 1.) If the clip is not used then a separate ground wire has to be run out from the scope.

Be very aware that you have no electrical isolation when using your Arduino. If you have a USB connection and you make a mistake with your ground connection you could damage the Arduino or the device it is connected to.

Figure 3. A potential divider for one channel.

The potential divider is external to the ADC. It doesn't use the ADC's internal resistance as part of the divider.

Yes, you always need a closed loop to measure a voltage. This means, you have to connect the ground of your arduino with the ground of the voltage source (your DUT, device under test). You could also use a differential probe, if you can not connect both ground signals, but this is way more complex and you still need two inputs (+ and -) to connect your DUT.

So the easiest way would be to just connect grounds and connect the voltage divider between your signal you want to measure and the shared ground.

a resistor based voltage divider requires some current to flow, it doesn't have to flow to ground, and you can adjust what the resistances are to change how much total current is drawn, but for what your describing, it would likely end up to ground

Ok so lets use an op amp, I do not know how high a voltage you need to divide, but lets say its something reasonable e.g. 10V, in this case, if you can power the op amp from a voltage higher than this signal, you can use it to buffer it, it has 10V on its + input, and it outputs a fixed 10V on its output, while only drawing a tiny current e.g. 1nA, you can then use a normal low value resistor divider inside your device, 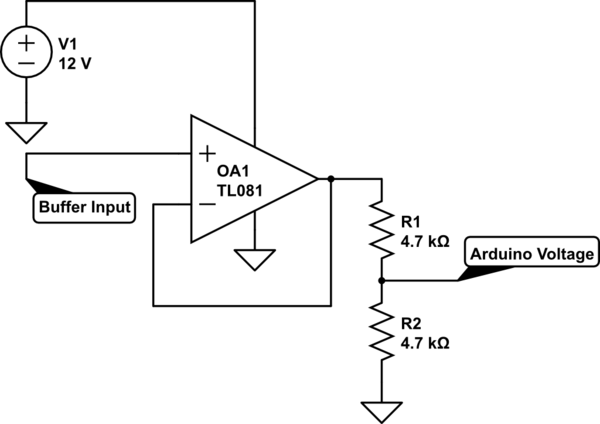 If the external voltage is much higher, you can still use this to make a divider with larger resistors and a lower current drawn from your signal, e.g. lets say you wanted to measure 50V, with that op amp, you could divide that down 10:1 with large resistors around say 1 million ohms for the input and 110,000 ohms for the lower leg of the divider, the op amp then buffers this to your arduino drawing only a small amount of current from the signal, in this case about 40uA 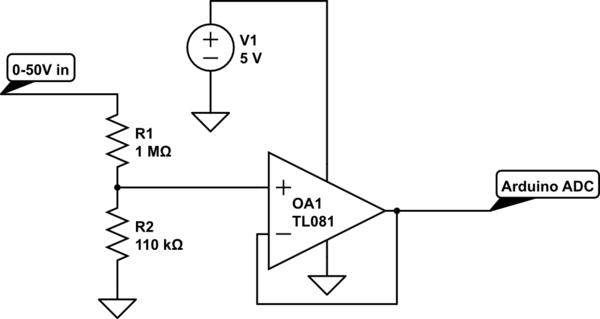 And as a work around to the other answer, while more difficult, you can use an op amp as a differential amplifier, so instead of connecting the arduinos ground to the outside world, you end up with 2 inputs, where your measuring the difference between them,

Not the answer you're looking for? Browse other questions tagged arduino oscilloscope voltage-divider or ask your own question.