Transistor question and is my circuit safe for Raspberry-Pi?

This is my first circuit designed from scratch (that actually does something interesting), so please be patient with the beginner's mistakes (and maybe point them to me).

My circuit is the following: 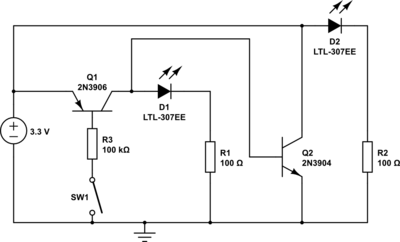 What the circuit does is:

Most probably this circuit has a common name (astable ?) but I don't know it.

This circuit will be used with Raspberry-Pi's GPIO. Basically, the SW1 will be replaced by a GPIO pin.

About the question 1, it is not necessarily wrong provided that you have a load between its collector and the positive or between its emitter and the negative, and its impedance is high enough to reduce the current through the transistor. That's the main problem here: Q2 is shorting the battery, which will probably result in one of two things: fry the transistor or exhaust the battery (or maybe both).

So my advice: put the LED and the resistor in series with Q2, not in parallel, and use a PNP transistor for Q2 instead of an NPN.

About the question 2, if you want to wire a GPIO to the circuit to replace the switch (i.e. connect it to the 100K resistor), I don't see a problem, the resistor is high enough to limit the current drawn from the board.

It could be a problem if you tried to power an LED directly from the GPIO.

Of course you'll have to remove the switch, because if it is closed when GPIO is high, you'll be shorting the GPIO output to the ground.

The major issue here as brought up already is that you are shorting your source when the switch is closed. Whenever you use a npn bjt as a switch it is good practice to place a resistor on the base for current draw since \$I_c = beta*I_b\$. You will run into a substantial current draw through Q2 since the current through R1 is \$2.6v/100ohms = 26mA\$ and depending on what your GPIO pin sources it could lead to a big current through the base of Q2 (current division) which can lead to bigger current through the BJT causing you to fry your pin. I think a better configuration would be to tie both the bases of an NPN and PNP to that pin and put the LED with a current limiting resistor in series with each BJT that way when the switch is open you will turn on the PNP and when closed you will turn on the NPN.

Note: always make sure you saturate your NPN.

Not the answer you're looking for? Browse other questions tagged transistors switches raspberry-pi or ask your own question.