Why reverse connected MOSFET start to turn on at Vgs<Vth?

At low Vgs (<< Vgs(th)), the reverse connected MOSFET is conducting due to current in the body diode, resulting in a Vds value of about 0.6 V. As Vgs increases to above 0.4V , Vds starts towards GND level.

Why does the reverse connected MOSFET starts to turn on from about Vgs = 0.4 V when this MOSFET has about 1.1 V threshold?

Why does the reverse connected MOSFET starts to turn on from about Vgs >= 0.4 V when the published Vgs(th) value is 0.65V minimum?

The results that you are seeing are due to (well known to industry but less known in popular understanding) assymmetric behaviour of MOSFET Vgs / Ids characteristics at Vgs values both around and below Vgs(th)_forward.

Specifically, Vgs(th) may be effectively lower o even vey much lower when Vds is negative (but necessarily <= Vf(body_diode) and Ids_max may be very substantially higher for a given Vgs when Vds is negative. This is exactly the results that you are seeing.

Their following summation explains what you are seeing.
Note that the numerical values relate to the device they are dealing with and are similar in nature but somewhat different in absolute values to your example.

"From the measurement results it can be observed that:

This 15 page appendix Third Quadrant DC Output Characteristics of Low Voltage Trench MOSFETs* provides a useful introduction to the subject, and there is much other material available 'on web'.

The following quotes (edited for brevity) are drawn from the above text: 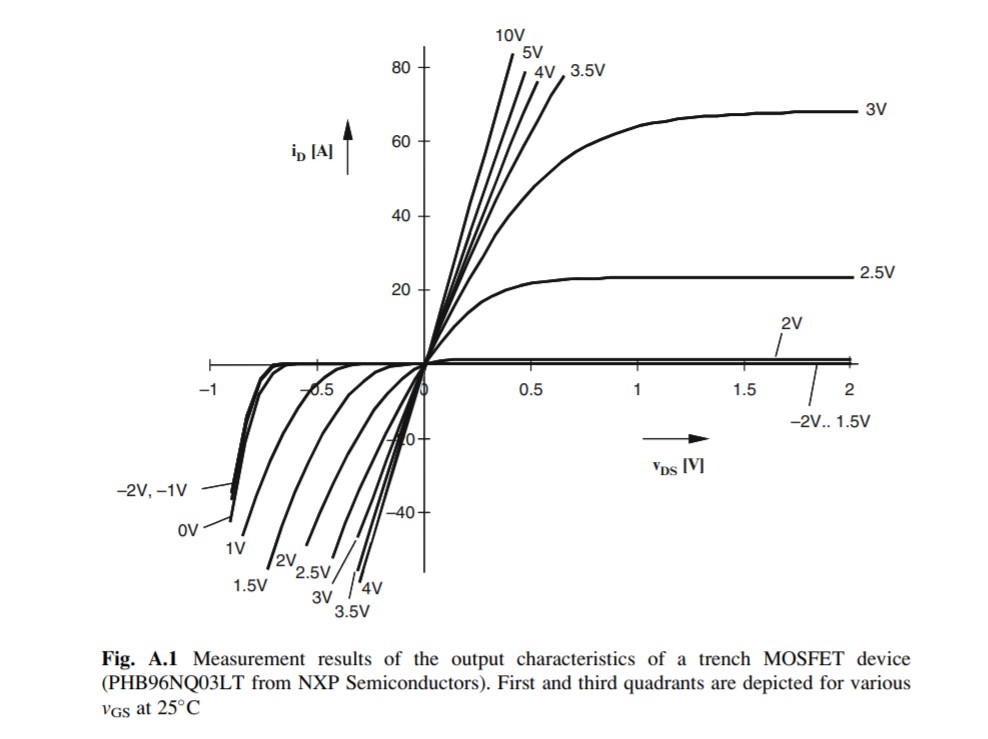 Your device behaviour for comparison.
If the device behaved symmetrically you would expect the 'yellowish' body diode limited curve to extend out until about Vgs(th)_forward at about Vgs = 0.6V

This reference Power MOSFET Basics by Alpha-Omega Semiconductor - who provided the coted datasheet and presumably the correct LTSpice model, covers the observed behaviour in its graphs but seems to miss the points raised above (see page 4) in its text !

The cited appendix is taken from this book - Voltage Regulators for Next Generation Microprocessors - copyright Springer, 2011.

A MOSFET is actually a 4-terminal device: gate, source, drain, and body. If you buy a discrete MOSFET in a 3-pin package then the body has been internally connected to the source. These devices are intended for use with the source terminal always connected to a lower/higher voltage than the drain for an NMOS/PMOS transistor. Furthermore there is inherently a PN junction from the body to the source and drain. In a 3-terminal device the source is shorted to the body so that junction doesn't matter. However, if we ever let the drain voltage become significantly lower/higher (NMOS/PMOS) than the source-body then we run the risk of forward biasing the parasitic body-to-drain diode.

So what happens at voltages too low to forward bias this diode? In that situation we have to consider what we really mean by "source" and "drain". For a 4-terminal MOSFET there may be no physical difference between the source and drain, so which ever of these is at the lower voltage (for an NMOS) will be, at that point in time, the source while the terminal at the higher voltage becomes the drain. What you have observed is that when the conventional sense of \$V_{DS}\$ is reversed then the source and drain terminals swap locations and the transistor can operate in the "reverse" direction.

This happens by design in analog multiplexers that use MOSFETs. For many years the threshold voltages of common 3-terminal MOSFETs were high enough that you usually didn't see significant conduction in the "reverse" direction before the parasitic body diode started conducting. Now that we have 3-terminal MOSFETs with low threshold voltages it is possible to see normal MOSFET conduction for low values of drain-source voltage that would normally be considered a "reverse" voltage.

This turns out to be a far better and more useful question than is at first apparent. Such so that I am adding a second answer that focuses on the specifics involved.

While the answer below is essentially correct nd useful, my new answer highlights the known differences in 1st and 3rd quadrant Ids with Vgs below Vgs(th) in MOSFETS. Some of the "it may be that"s in my original answer are reflected in my new answer.

The "problem" is several fold. Some of these points look to be "nit-picking" (trivial and/or exaggerated) and to some extent they are - but your question, while a good one, also falls in the same category and we have to look at 'all the little things' to see possible causes. Ultimately, you are trying to extract very small precision data from a device at an extreme end of its operating range where either no expectation of precision applies and/or very small effects become significant.

The graph below (taken from a blowup of you one) shows my interpreted / interpolated values for a number of key points. I have calculated currents at various points and relative effects of body diode and channel resistance as the channel starts to visibly conduct. I have not added them as this has already taken longer than I hoped. The above may provide enough ford for thought. If any sounds worth pursuing questions are welcome.

Do you know that every MOSFET has a build-in body diode between the drain and the source?

In your case, the anode of a body diode is connected to the source terminal and the cathode to the drain terminal. 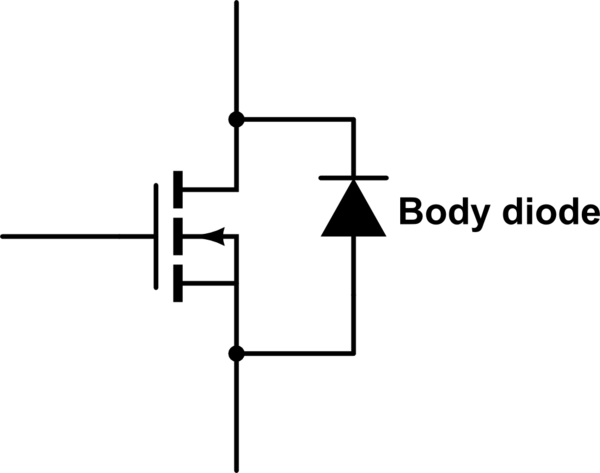 And this is why you get 0.6V when MOSFET is reverse connected. Because this diode is now in forward-bias and conducts current.

I use this one http://www.aosmd.com/products/mosfets/n-channel/AO3400

And get this results: 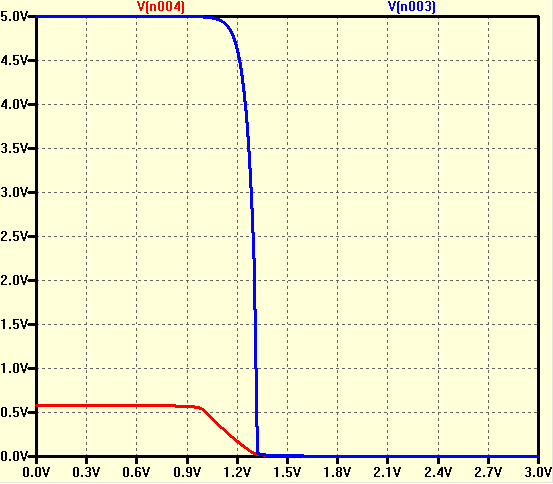 Not the answer you're looking for? Browse other questions tagged transistors mosfet cmos semiconductors or ask your own question.

16
Why are discrete four-terminal MOSFETs so hard to find?
6
Load Sharing charging circuit for Lithium polymer