I've cobbled together a diesel pump controller and timer from various bits and pieces and now I'm improving the design. The biggest issue is minimising battery use, because in the wet season the pump rarely starts so the battery is not charged, and cloudy conditions prevent solar charging.

The controller/timer is an Arduino with a relay switching the starter motor circuit and a servomotor that actuates the engine's pressure relief valve.

The trigger is a garage remote fob and a little circuit board containing a radio and a relay, all powered by 12V DC. The relay is connected via debounce to a digital input of the Arduino.

There is no requirement to operate the pump at night so there is no need for any part of the control system to have power. The objective of this question is to arrive at a simple circuit that disconnects both the remote relay radio and the Arduino from the pump's battery while it is dark.

Supply is 12VDC and the combined draw from the Arduino and the garage remote relay radio is between 80 and 100mA although the relay probably pulls more than that while it's actuating. So lets say 500mA peak, that's 6W peak, 1W continuous.

Using a photoresistor to bias a transistor is pretty common but usually this is a low current input sensor arrangement. Has anyone tried switching power like this and if so are there any gotchas I should know about while designing? The forward voltage drop over the MOSFET won't matter, I'm regulating it down to 3v3 and 6V anyway.

Would you suggest some other arrangement like a photodiode or a phototransistor?

This is your classic hobby nightlight. 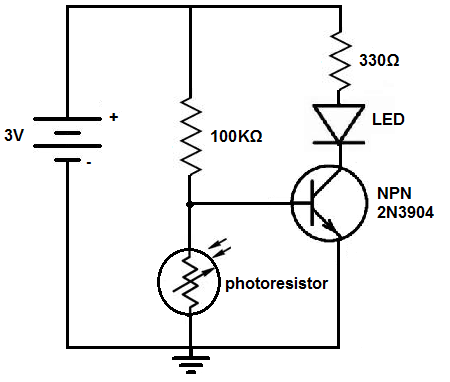 My first thought is something like this but swapping the photoresistor and the fixed resistance (100K in the diagram).

Browse other questions tagged power switching or ask your own question.