Usually I use NPN to drive LEDs but in my project I have to use PNP because the cathode of the LED is tied to GND.

Then I have a question, is it possible to have a command of 3.3V and the PNP tied to the 5V.

It doesn't matter what kind of transistor you use if the anode of the LED is tied to ground and you don't have a negative supply.

"LED" stands for light emitting diode. To light a LED, you put forward current thru it, meaning in the direction so that the inherent diode is forward biased and conducts normally. The anode is then more positive than the cathode.

LEDs don't work on the Zener principle, or anything else that makes use of reverse biased conduction. Most LEDs are not very good diodes in that they leak and their typical reverse voltage before breakdown is around 5V. The leakage is partly a function of light hitting them, and this can be harnessed to use a LED as a light sensor. However, that does not apply here since I assume you want to light your LED normally.

By the way, both a PNP and NPN can be used to drive a LED from the high side, but again, none of that matters with the LED hooked up backwards.

Added now that cathode is tied to ground:

You now say the cathode is tied to ground, which makes more sense if you want to light the LED normally. It now appears your question is how to control this LED from a 3.3 V logic signal but have most of its current come from a 5 V supply, and the LED cathode tied to ground outside your control.

There are many ways to do this. This is probably the simplest:

This is assuming a normal green LED which will have a forward drop of about 2.1 V and that you want close to 20 mA thru the LED. If you only wanted a few mA, you could probably drive it directly from the digital output, so I'll assume the problem is you want full brightness and your digital output can't source 20 mA.

This circuit will light the LED when the digital signal is high. In that case, the base will be at 3.3 V. I am using 700 mV for the B-E drop, which leaves 500 mV accross R1. At 27 Ω, that sets the LED current at 18.5 mA. There will be some slop, so I wouldn't want the nominal to be higher than that given a "20 mA" LED. The brightness difference between 18.5 and 20.0 mA will be nearly impossible to see with your eye even in a side by side comparison. 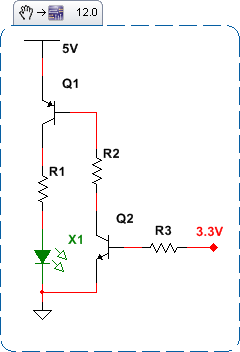 There are other options, of course. Many many ways to skin a cat.

For a 3.3V signal you don't need this: a simple emitter-follower NPN circuit, in which the resistor + LED are the load, should do. 3.3V volts minus the 0.7 VBE is still a large enough voltage to drive the LED. The NPN's collector supplies the current and that is that.

Now if the problem was that you want to turn on grounded LED with a small voltage, the following circuit, consisting of an NPN stage followed by a PNP stage will let us do that: 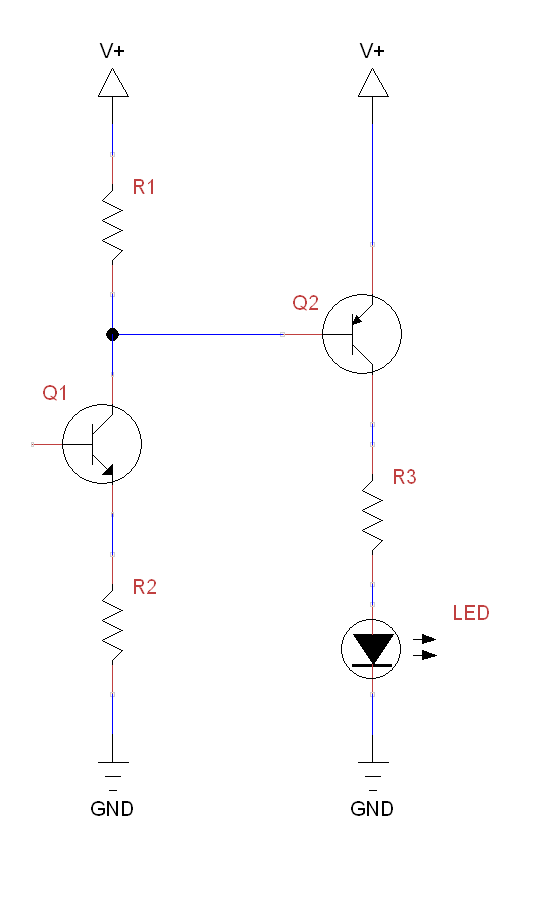 Here, we need as little as around 0.7V to turn on the Q1 NPN, to get enough current to flow across R1 to develop a voltage that turns on Q2 PNP.

R2 is necessary to present a decent impedance to the source which drives Q1, and also to limit the current through the Q1-Q2 path. We don't put an emitter resistor on Q2 because we want that to saturate easily.

Rushing. Diagrams later maybe.,
You should be able to draw this yourself from the following.

Not the answer you're looking for? Browse other questions tagged led bjt pnp or ask your own question.

5
Is this a proper use of a PNP transistor?
0
Driving one LED from audio signal only with pnp transistor
0
Transistor inversions
6
Controlling higher voltage and load via high-side switch from a microcontroller
2
PNP to NPN Transistor switch
5
What's the differences of these usage of PNP, NPN transistors?
0
How do I implement a DPDT-switch here using NPN/PNP instead?
2
Transistor toggle by NPN and PNP - how is it build?
1
Need help understanding PNP Base into NPN Collecter circuit for LED Array
0
BJT Circuit Current