The term Feed-forward and its meaning?

I am trying to understand the technical meaning of the term 'feed-forward', when and where it can be used and where it cannot be used? I have seen this term in various different areas.

What phenomenon is encapsulated in this term. And if a certain phenomenon is labeled as 'feed-forward' then what are the attributes and properties that are understood that will be possessed by that phenomenon?

I think it is easier to show an example. I know that many "sigma-delta" ADCs (analog to digital converters) use a combination of feedback and feed forward.

I found an example of a block diagram of such an ADC here in this article, about Higher-order incremental delta-sigma analog-to-digital converters.

The general direction of the signal flow is from left to right. The input of the ADC is at the left, the output at the right.

Note how there is a feedback line at the bottom of the diagram, from the output of the Quantizer back via b to a summation point near the input.

Note that by changing the value of b this can be either positive feedback or negative feedback. But it is feedback as the signal "goes back" (in the direction of the input).

Then there are the three signals at the top of the diagram which feed a signal from left to right so in the "forward" direction. These are the "feed forward" paths. Again, depending on the coefficients a1 and a2 these signals can give either positive feed forward or negative feed forward. But both are feed forward as the direction is towards the output.

The picture below represents a velocity controller that you can usually find in AC servo motor. It's just a fraction of the entire cascade loop.

The low frequency signals (slow response) go through lower path, this is: velocity setpoint (\$ \Omega{set}\$) , actual velocity (\$ \Omega{m}\$) from encoder feedback, lowpass filter (\$ T_{f}\$), PI controller (\$ K_p, T_i\$). The output is the torque setpoint for another PI controller. This path is used to correct the velocity error "a posteriori" , meaning the error is present and we tend to reduce it.

The higher frequencies (fast response) signals go through upper path, so called feedforward. With a known system friction (\$F\$) and known system inertia (\$J\$), with known static load torque (\$M_{teze}\$), with known setpoint speed and its rate of change (\$\dfrac{d}{dt}\$), we can predict the torque in advance "a priori". This is very fast acting path that injects the signal forward before the velocity error yet exist. 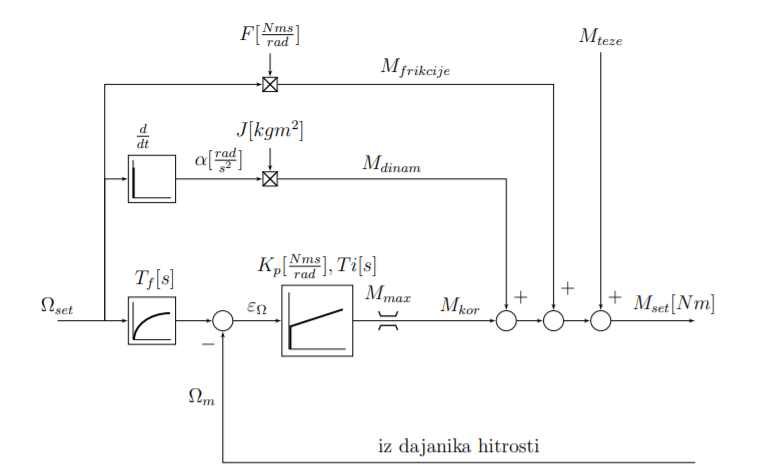 Let me step back first...A control system needs an input and output, and some method to measure feedback. Open loop examples include magnetic stepper motors, while closed loop tend to be linearized for one or more variables.

In between, there are signal conditioners or processors to feed an improved response in both time and frequency domain. This can be in any direction of the servo, either on the input or sensing the output.

How is Feedforward different than Feedback?

In any control system, it important to know any condition of saturation, forward or back as the incremental gain drops to zero (0) at this threshold which affect the time error response and stability.

Not the answer you're looking for? Browse other questions tagged control-system terminology digital-filter convolution feedforward or ask your own question.

7
Meaning of an arrow in the control scheme
3
bldc motor torque controller
28
What does the term “bias” mean?
10
Was the term “shield” in use [for daughterboards] before arduino became popular?
2
What is the relationship between feedforward control and bandwidth?
0
Field Oriented Control Feed Forward Term
0
The meaning of Bandwidth
0
Confusion regarding the term“locking” in PLL