Question about feedback in a current reference 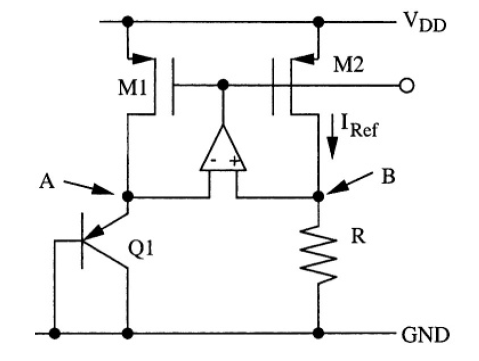 The author of my book says:

Observe that the circuit has two feedback paths around the gain stage. One positive, the other negative. Assuming transistors M1 and M2 matched, equal currents are injected into R and into the diode connected transistor Q1. The voltage across a diode changes as the logarithm of the current; therefore, the feedback on the resistor side is typically stronger than the one on the bipolar transistor side. Transistor M2 and resistance R form an inverting amplifier. Therefore, in order to ensure stability, node B must be connected to the positive terminal of the differential gain stage.

I've understood that the loop which contains M2 is the negative feedback loop and the loop which contains M1 is the positive feedback loop (to check it, it is sufficient to break the wire, apply a small voltage increase and note that M1 and M2 are common-source configurations, which thus invert the signal). But what does it mean, from a mathematical/electrical point of view, that "the feedback on the resistor side is typically stronger than the one on the bipolar transistor side"? What would happen, from a stability point of view, if inverting and non-inverting terminals of the op-amp would be exchanged? How to work in general when we have two (or more) feedback loops?

The change in voltage with current is greater on the resistor side than on the transistor side when the current is in the normal operating range for this circuit.

Note there are two different things going on here- the bias point is set by the resistor relative to the (more-or-less fixed) diode drop. The stability depends on negative feedback so the derivative of the voltage with respect to current.

Not the answer you're looking for? Browse other questions tagged operational-amplifier current feedback stability reference or ask your own question.