What is the type of this transducer?

I am working on how to use ultrasonic devices to inspect some products.

I am completly new to this.

After searching around the Internet and reading the specifications of this transducer, I only know it is an angle beam transducer.

But what type of transducer is it: single element, dual element, or delay line transducer?

By the way, what is the meaning of "delay line" transducer, how is it different from other transducers? 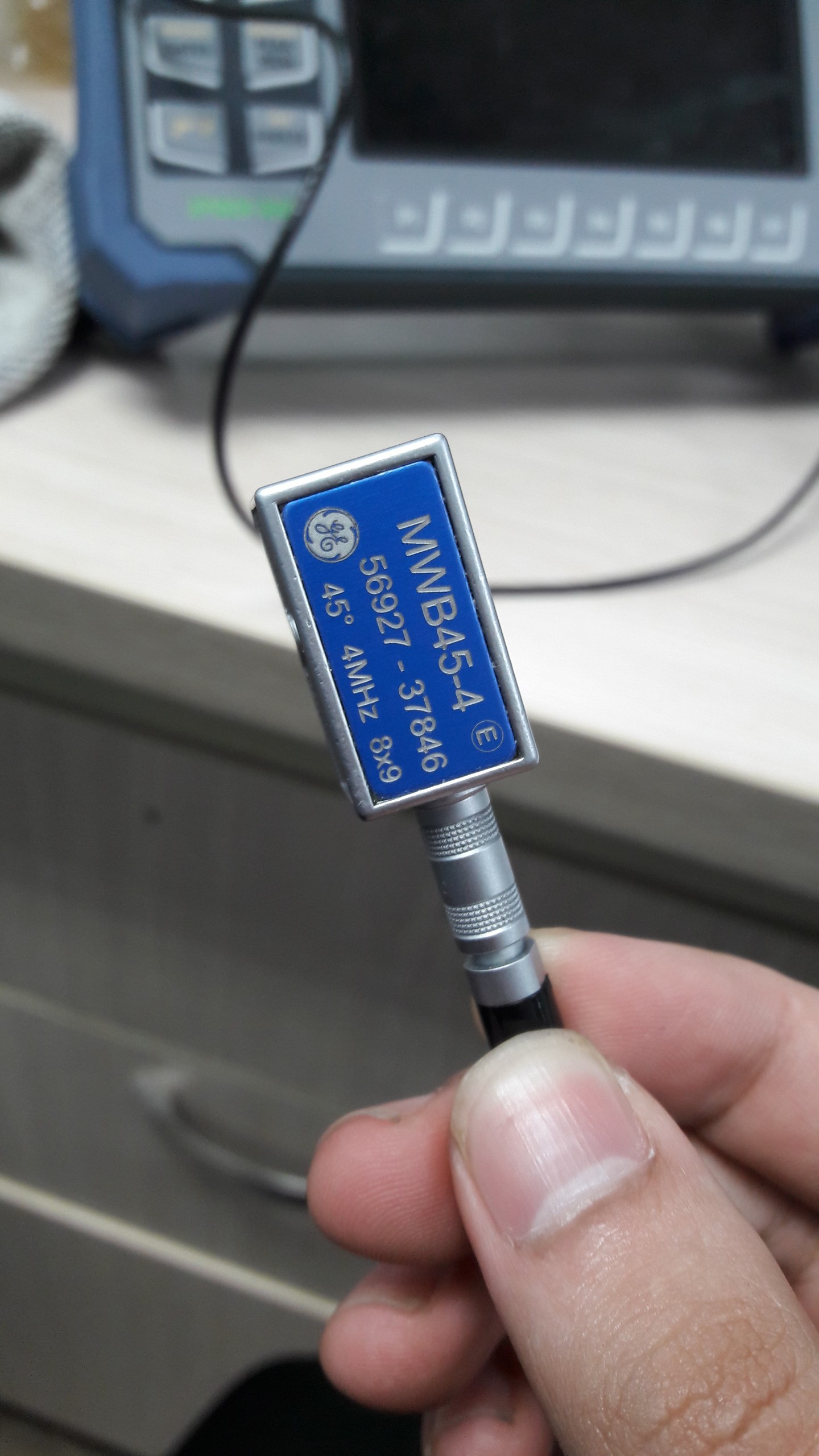 As with many things in the electronics world, you start by finding a datasheet for the device.

In this case, it doesn't tell you much about how the device works. It is more about providing information on how it measures up according to standard EN 12668-2.

Slightly more useful is this product page from a company that sells them.

There we learn that your module is an angle beam transducer (which you already knew) and that it has a single crystal.

Both the datasheet and the web site tell you that it operates at 4MHz and has a beam angle of 45 degrees.

It doesn't appear to be a delay line transducer. That's a feature I would expect to see noted if the transducer had it. Given the definitions, I'm not sure you can get an angle beam transducer together with a delay line.

A delay line transducer has an additional piece of plastic between the transducer and the outside world. It takes the ultrasound a known amount of time to traverse that plastic piece.

Ultrasound works by detecting echoes. If the echo arrives too soon, then it can't be properly detected. Things close up can't be "seen" properly so you might miss defects in the top layer of the target.

The delay line is kind of like a far sighted person holding the newspaper at arms length in order to see it better.

Since the length of the delay line is known, you can mathematically account for it and remove its length from the measured distance to a flaw.

In any case, your job is to discover the properties of the transducer you were given and see how they would relate to the products you might have to inspect.

In what conditions would an angle beam transducer be of more use than a transducer that isn't angled beam?

When might you want a delay line transducer, and why?

What effect does the frequency have on the resolution?

I'm sure there are a million other details.

You need to get familiar with the transducers and your products, and match requirements and capabilities.

This question is in fact too broad, and will be closed soon. (I will vote for closing it in just a moment.)

I had too much to say to squish it into comments.

From the device marking I guess it's some kind of ultrasonic contact transducer for flaw detection. It's a similar device than those used to make ecographies to human beings, but in this case they are used to detect flaws inside (i.e. inaccessible) other structures like pipes, tanks, pressure vessels, axles, forgings, castings, bridges, railroad wheels and rails, etc.

You feed this transducers with a pulse of sinusoidal wave (4MHz in this case) and they generate an ultrasound beam that wll be reflected into the internal structures of the object you put the transducer on. Detecting and analyzing the returned wave you can know if they are defects inside, etc.

Different kind of transducers produce different shapes of ultrasound waves. In this case you seem to have an angle transducer, which generates an angle beam at 45º. This introduces a refracted shear wave into the test material, useful to reach difficult places. See this figure (extracted from here):

Unfortunately, I'm not an expert on this subject, and I cannot elaborate more. You'll have to find the rest by yourself. For that you will need some knowledge on ultrasound techniques. Otherwise you have a hard time ahead.

Not the answer you're looking for? Browse other questions tagged ultrasound transducer or ask your own question.