I am design a transistor switch circuit.

Can someone tell me how to read the Fig 7 graph. In the graph, the gain value is fixed at 20. But according to my application, Max Ic/Ib = 30. How to take values from that graph. I just want to understand and ensure that my transistor will act only in the cut-off and saturation region. 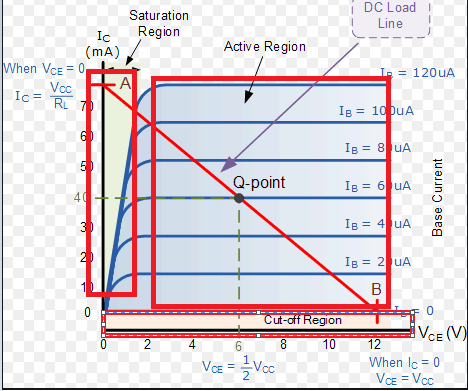 I am design a transistor switch circuit.

OK, that then means that we are going to operate the NPN in saturation mode.

Why not in Active mode?

Because we want a switch, in active mode the transistor doesn't act as a switch it acts more like a variable current source.

That's where saturation mode comes in. In saturation mode we simply make \$I_b\$ so large that the \$I_c = \beta * I_b\$ becomes much larger than the actual \$I_c\$ that is flowing.

What then determines \$I_c\$? In saturation mode I mean.

The \$I_c\$ in saturation mode is then determined by the load. Your load wants 30 mA to flow so we need to make sure that we apply enough \$I_b\$ to the transistor so that the 30 mA can easily flow.

If you would chose \$\frac {I_c}{I_b}\$ = 30 then you would need \$I_b\$ = 1 mA and the transistor would be a little less deep into saturation. That would mean there would be slightly more voltage drop across the transistor when it is switched on.

This plot is relevant as it shows what the transistor's \$\beta\$ is for a certain collector current. For your application we know that the collector current is 30 mA. From Figure 6 we can then see that \$\beta\$ (the plot shows \$h_{fe}\$ which is just a different name for \$\beta\$) is always more than a about 150.

As described above, for saturation mode we need \$\frac {I_c}{I_b} << \beta\$ and that condition is met in my examples above.

Note that you need a very small value of \$I_c\$ for \$\beta\$ to become much smaller. Experienced engineers know this so ignore the plot and just use the value of \$\beta\$ from the tables.

Not the answer you're looking for? Browse other questions tagged transistors gain or ask your own question.