I'm hoping that you friendly and knowledgeable folk can help me finally figure out how I should be wiring up my LEDs in my panels.

Many years ago I took over a panel building department which was in a dire state. I have managed to turn it around now having correct wiring diagrams, CE conformity, etc, etc.

I build 3 phase panels for use in the chain hoist industry and each panel has a 'handset' which controls the hoists. Each 'channel' on the handset has a toggle switch and bi-colour LED to show the direction chosen, green for up and red for down. Now ever since the dawn of time, we have fitted an AC transformer in the panel which sends 24v AC and a 0v down to the handset which goes to the toggle switches and also the LEDs.

On each toggle switch, we solder a resistor which then feeds both legs of the LED.

As far as I am aware it's unusual to power LEDs with an AC supply. Primarily they prefer DC. I am assuming the use of the AC power supply was because of the very long distances these handsets have been used in (some over 100 meters) and thus the AC works better.

I wish to ditch the AC transformer and fit a DIN mounted 5amp DC unit.

My question is though, will I still have to fit the resistors? I know they should be needed to smooth out the current going to each LED but just wanted to check.

Below are links to the LEDs and resistors I use in case anyone wants to check the specs.

I hope you can help me gain more of an understanding of LEDs.

Now ever since the dawn of time, we have fitted an AC transformer in the panel which sends 24v AC and a 0v down to the handset which goes to the toggle switches and also the LEDS.

This is probably because when the system was designed at the dawn of time,

I wish to ditch the AC transformer and fit a din mounted 5amp DC unit. My question is though, will I still have to fit the resistors? I know they should be needed to smooth out the current going to each LED but just wanted to check.

You will still need to fit the resistors. These limit the current through the LED so it doesn't blow up. You will probably need a different resistor value to get the same brightness from your lamps, when you switch from 24 V AC to some other DC voltage.

In fact you should stop using AC for this task immediately. When you look up the datasheet of the LED you may notice that the LEDs have a maximaum reverse voltage of only 5 V. This is exceeded by your current setup.

I recommend 150 Ohms resistor for 5V supply. You can't put the LEDs in series as they have a common cathode.

As far as I am aware it's unusual to power LED's with an AC supply?

It's not so much that they prefer DC, as that LED's don't like having current shoved through them in reverse. And, in fact, if these are wired the way I suspect they are (just the resistor in series with the LED) then every half-cycle of AC they're seeing just about as much reverse current as they're seeing forward current during the other half cycle. I'm surprised you don't have aging problems with them.

I am assuming the use of the AC power supply was because of the very long distances these handsets have been used in, some over 100mtrs! and thus the AC works better.

A simple transformer would have been less expensive than a converter. I'm not sure at what point the cost would have reached parity for industrial stuff, but it was about ten years ago for wall-warts.

I wish to ditch the AC transformer and fit a din mounted 5amp DC unit.

My question is though, will I still have to fit the resistors? I know they should be needed to smooth out the current going to each LED but just wanted to check.

It's not to smooth out the current, it's to limit the current. A bare LED (which is what you have) drops a fairly constant voltage. If you try to supply a constant voltage, then there will always be some mismatch, and you'll either get too little current or too much. So you need resistors; those resistors are about right for a 24V supply, but you'll need to scale them for different supplies.

The LEDs from the link use indeed DC (afaik all LEDs do, but I don't have that much experience with different kind of leds).

Since those LEDs have 3 legs, these are two colored LEDs.

You will need resistors. It is not a normal lamp where the resistance is part of the lamp itself.

The resistors you use are way too much, if you use them, most of the power will go into heating up the resistors, which is not necessary.

As a basic rule, use:

Also note, that LEDs have two different sides, so make sure you put the anode and cathode side correctly.

First, I'm not experienced with LED chains myself.

This is exactly the max current a LED can get so you are ok.

So yes, one 1200 R resistors fit with one LED (or actually, one per color), but if you want to have less resistors you can put multiple LEDs in series with one resistor, and also you lose less power in resistors (heating).

But this way you save a lot of heat and number of resistors. Make sure the resistance is not almost 0, as the forward voltage might change slightly because of temperature, same as each resistor has a tolerance.

It has to be DC since this gives a stable current without flicker. Also, since a diode is a semiconductor, it will only allow current in one direction, unlike a bulb. If fed too much reverse voltage, it will break.

All LEDs have a rated current used for writing down the specification - 20mA is the industry standard for that. Absolute maximum rating is somewhere >25mA. Higher currents than that and the LED will blow up. Thus you need a current limiting resistor in series.

Forget about using 20mA though, you might need that much for crap-off-the-shelf LEDs like the one you linked. But you should go for a high intensity one instead, they cost the same but need far less current to produce the same light. Buying brighter LEDs ~200-300mcd for the same price means that you can cut the current consumption at least 20 times. Kingbright and others have these.

The next thing you need to note is that LEDs of different colors often have different forward voltage. Using Ohm's law is an over-simplification, the correct formula is (Vin - Vforward) / Iforward. So if you have 24VDC, a forward voltage of 2.5V for a certain color, and aim to get around 5mA, you should pick

And finally, you mention CE marking. To CE mark a control panel for hoists must conform to mandatory harmonized standards for electrical equipment. Namely EN 60204-32 regarding electronics for hoisting machines, which is harmonized under the Machinery Directive. This standard states which colors that should be used for certain situations (10.3.2). Red is reserved for emergencies and hazardous situations.

In order to dodge this text in the standard, you would need to raise a strong argument why red light is suitable for your product - for example if your customer has addressed this in their risk assessment. Which they probably haven't. So this is something that machinery inspection from any government is likely to leave remarks about.

In addition, it is very common that men have trouble distinguishing between the colors red and green in particular (women don't have this problem, but operators in traditional industry are mostly men still).

I would therefore recommend to use a different color than red. Green + yellow or green + white, something like that. You might have to use RGB diodes instead of bi-color.

Since you say you've never had a failure in the LEDs driven by 24VAC, I would think the old adage "never touch a running system" applies.

From the description, though, you are operating the LEDs in a way that could cause failure. The LEDs you linked to have a maximum reverse voltage of 5V. You are subjecting them to way lots more than that. 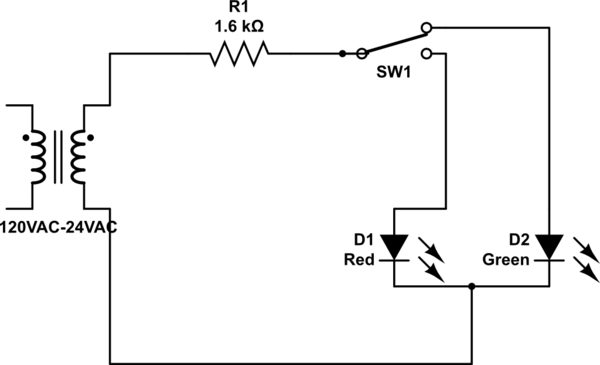 If you are concerned about the LEDs being exposed to the high reverse voltage, then you could do this: 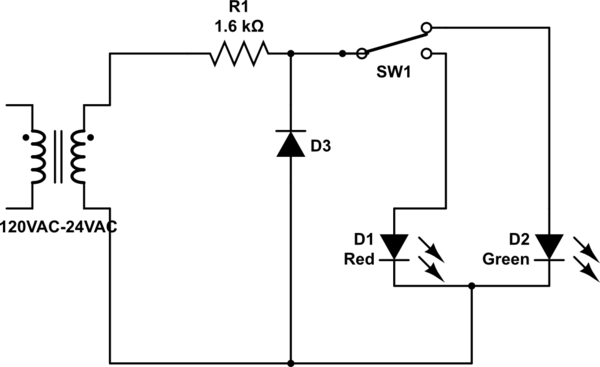 If you do that, you will want to change R1 from a 1 watt part to may a 2 or 3 watt part because it will be conducting current for a larger part of the time. You'll also want to use something like a 1N4002 - it is rated for higher voltage and current than required so you won't have reliability problems.

In the end, though, I suggest you consult an engineer locally. He could look at your circuits and tell you if you need to worry about the LEDs - or, more importantly, worry about and fix something that you may not have thought of.