I have been exploring how LED light bulbs work and the circuit inside of them. One particular question I have is how the lights are actually arranged?

LIFX, for example, has 4 different types of LEDs; red, green, blue and white. I am assuming each string is controlled by its own channel b the microcontroller, but how are the strings arranged?

Assuming there are 10 Green LEDs, (20mA, 3Vf), would the green LED string be arranged in series? Having a voltage of 30V?

If so, what would happen if one LED fails, would the rest of the LEDs in that string also fail?

Would it be better to arrange LED's in series or in parallel for this kind of scenario? 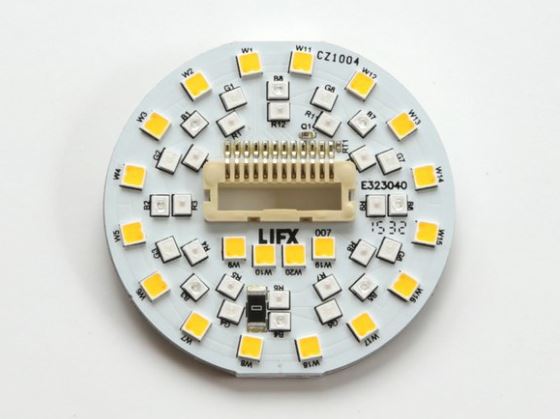 It's likely a combination of series and parallel, arranged for the target drive voltage and depending on both Vf and the number of LEDs in each string.

Parallel LEDs have issues with Vf matching and therefore, brightness. So series arrangement is preferred as it evens out brightness in the string, and can be controlled by a single PWM current-regulated source. The currents required are smaller, so wiring and traces are more compact.

And indeed, if one LED fails in a string, the whole string goes bad. To mitigate this the designers count on the fact that LEDs have a very long life (20-50k hours) compared to incandescent bulbs, so it's practical to wire them this way.

Not the answer you're looking for? Browse other questions tagged led parallel led-driver series lighting or ask your own question.

4
LED Voltage Drop in Series
21
Burned out filament but the light bulb has small resistance
1
Large parallel strings of LEDs
0
charger in series with light bulbs
0
Why is there no resistor in a christmas LED string light?
1
Connecting different specification LEDs in series / parallel combinations
0
Recommended design PWM-enabled driver for multiple 1W LEDs in series-and-parallel configuration?
3
Considerations for converting a LED Bulb from AC to DC power