I am new to the field of embedded systems. Recently I was learning about the differences between different bit size (8, 16, 32) microcontrollers. What I found was that the size of bit indicates the memory addressing capacity, data bus and address bus size etc. Every other website has almost the same explanation. But still I could not find answer to some of the questions. To list them:

The "bit size" of a CPU typically refers to the size of its general-purpose registers (or its primary register, in parts with nonuniform registers). For example, the MC68000 is generally considered a 32-bit architecture as its registers are all 32 bits wide -- even though it has a 16-bit data bus and a 20-bit address bus. (This means that it must make two memory accesses to write a single register to memory. The top 4 bits of an address register are simply ignored, which is a bit of an oddity.)

The sizes of the address and/or data busses connecting the processor to its various memories are often different, either from the size of registers or even from each other. In more complex architectures, it is not uncommon for the same memory to even be accessible over multiple data busses of different widths.

It is not necessary that data bus and address bus widths are same in a micro-controller. For eg, in the good old 8051, data bus is of 8 bits and address bus is of 16 bits. '8-bit' in the naming convention of a micro-controller is quite abstract. Mostly it refers to the size of registers inside 8. All general purpose registers inside 8051 are 8-bit registers except PC and DPTR. You have to go thru the data sheet. So you are wrong in your assumptions about 4th question, because '8-bit micro-controller' doesn't always mean that it has an address/data bus of 8-bit. Need more info to clarify it.

2,3 are purely architectural based. Yea, you can have different buses inside. Big topic.

Well that's a lot of learning books. You should get one in the library. 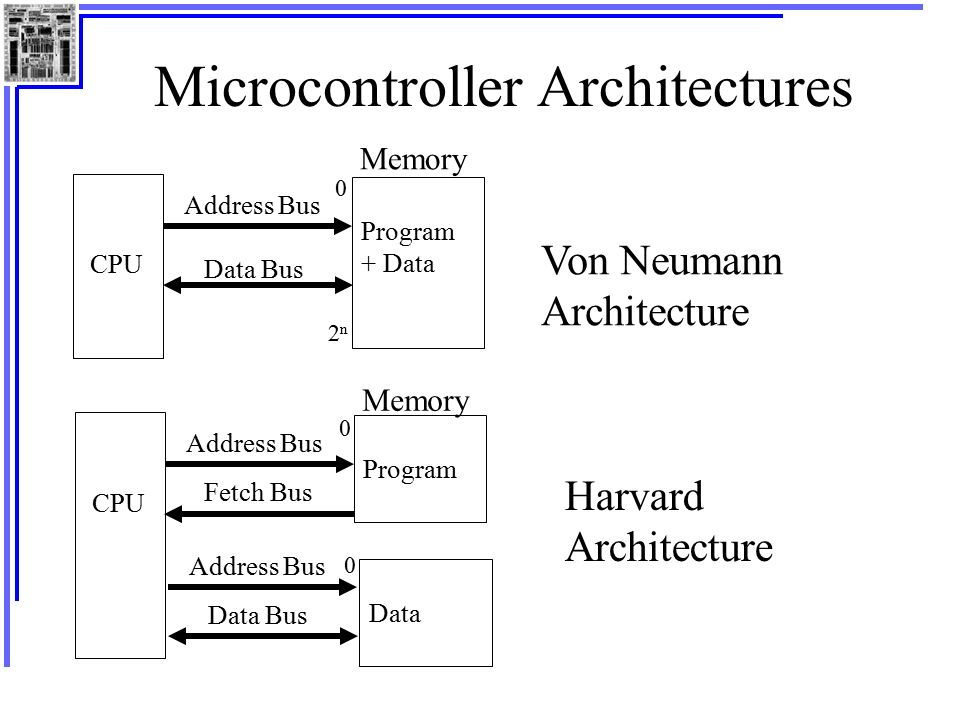 source of the image

(3) Do a microcontroller have have same address bus for all the memories...?

Not necessarily. Unlike a larger computer system where an operating system can load and execute different programs on-the-fly, the application code in a microcontroller typically is burned into the flash memory at the factory, and then is seldom or never changed after that. There is no need, therefore, for one microcontroller program to be able to treat the instructions of another program like data.

A system which, like some of the world's earliest stored-program computers, has separate data paths for fetching instructions and, for accessing data, can be simpler (cost less/use less power) than a so-called Von Neumann machine that stores instructions and data in the same memory space.

Not the answer you're looking for? Browse other questions tagged microcontroller addressing or ask your own question.