Can long-range radio waves from an RTV tower penetrate thin plastic composite material next to its source?

We are currently developing a conceptual design for the renovation of Croatia's main RTV tower located on 1033 meter tall peak Sljeme at the Medvednica mountain north of Zagreb. The idea is to renovate and reopen its upper gondola for touristic purposes (as a revolving restaurant and viewpoint towards Zagreb metropolitan area, as it was initially intended) and to build another floor of apartments on the roof-top level of a lower maintenance and equipment gondola. Basically, the wish of the investor is to make it an important landmark of Zagreb and place its touristic purpose, which it was lacking since its construction ended in 1976, because it was only opened for public 2 years, above its primary function which is receiving, boosting and transmitting radio, ATC and television signals in a radius of approximately 100 kilometres.

However, after our social studies and researches, we determined that this investment would be absolutely useless because nobody considers it as an important landmark which tourists should, or would want to visit just because of that, considering its distance from the city and long drive to reach it. As you can see in the picture below, the body of this monstrosity is completely covered with antennas and aesthetically it looks unpleasant and way too much utilitarian. My problem is that I absolutely have no idea what these devices are. Are those receivers or transmitters?

Our concept and solution is as follows: we want to envelop the tower's central body, beneath the upper gondola and part of its lower gondola with organic, deconstructivistic "curtain facade" made out of highly perforated (ca. 60%) approximately 5 mm thick lightweight plastic composite material panels, to visually "hide" those antennas behind, and to give the tower a brand new vibrant composition mixed with LED lights for night light shows, which will make it very eye-catchy from Zagreb and all surrounding cities.

From my personal research and previous general knowledge about long-range radio waves, which are transmitted and received by this tower, is that this should not affect its performance, because of the wavelengths and frequencies of those waves as such, they would just slice through this median without reflection and deviation of direction with minimal losses in strength. There are also some radome plastic materials which we could use to implement this, in which antennas are usually covered and that could be used for this.

Is that all above correct, or will our intervention of this kind render the tower completely useless and we will leave half of Croatia without ATC, radio and TV broadcast coverage? Keep in mind that this is only a conceptual idea we are considering to implement, and it will anyways probably be rejected and scrapped by the investor. We just want to know if it's okay to go out publically with this project as we imagined, or will we embarrass ourselves proposing something as ridiculous as that? I'm still just architecture and civil engineering student with minimal knowledge in electrical engineering and stuff alike, so if someone could give me some advice or answer my doubts about the idea above, it would be highly appreciated. I am sending you a link to some public documentation and specifications about the tower and the channels types it is broadcasting.

Recent image of the tower and antenna cluster it is equipped with: 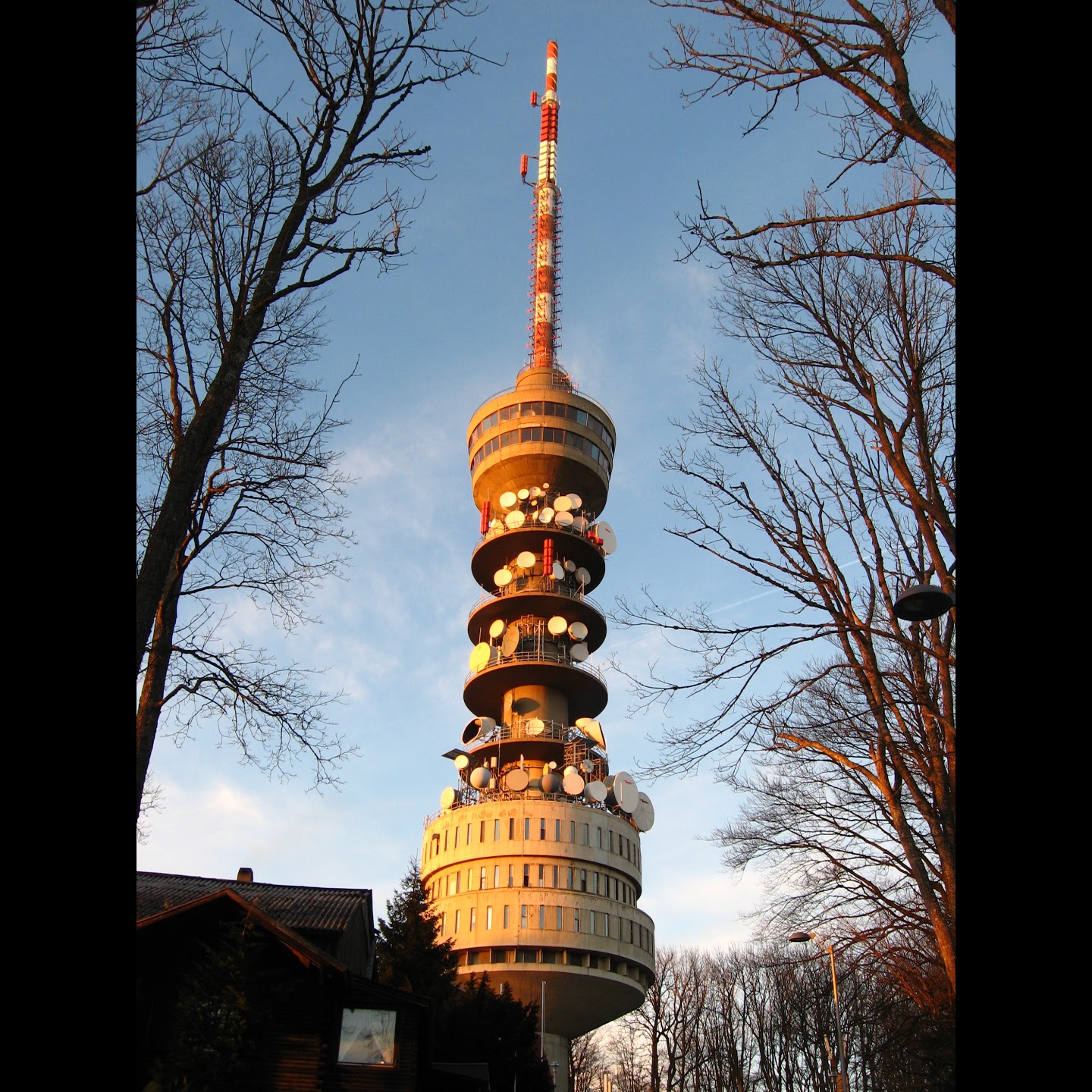 The upper steel antennas painted in anti-collision red and white pattern are none of our interest, only the antennas installed on the platforms around the tower's central body. Can someone recognize what are those for, and can their path be obstructed with described panels above, without significantly influencing their work on a daily basis?

Many thanks in advance for your time and understanding, I would highly appreciate any feedback and thoughts about our idea and if it can eventually be implemented.

covered with antennas and aesthetically it looks unpleasant and way too much utilitarian.

… I heartily disagree, but that's just a matter of taste.

My problem is that I absolutely have no idea what these devices are. Are those receivers or transmitters?

These things are antennas; some are used for receiving, others for transmitting, most for both.

Then there's things I can't assess:

We want to envelop the tower's central body, beneath the upper gondola and part of its lower gondola with organic, deconstructivistic "curtain facade" made out of highly perforated (ca. 60%) approximately 5 mm thick lightweight plastic composite material panels, to visually "hide" those antennas behind, and to give the tower a brand new vibrant composition mixed with LED lights for night light shows, which will make it very eye-catchy from Zagreb and all surrounding cities.

First of all: you're asking the wrong folks. These platforms have been rented out to companies operating these antenna systems, and all hinges on them agreeing to your plans – it's very unlikely a touristic attraction would ever generate as much revenue as the infrastructure is worth here. If at all possible, you need to have goodwill of whoever owns these platforms they rent out, and political support from above. The operators have rented the platform with guarantees about unhindered line of sight, with power reliability levels, and with a guarantee that the antennas are easy to access for maintenance, and access to the antennas is strictly regulated.

So, plastic will absorb RF, and that will be hard to sell to the people using these antennas. However, that effect scales with the percentage of that plastic that's actually holes, and there's worse and better plastics, so there's potential for compromise. However, expect things to become more expensive than thought.

Then: "Composite" is a bit too vague. There mustn't be any metal in front of these antennas. That rules out the possibility of putting LEDs directly in front of them.

Apropos in front: Human workers mustn't accidentally happen to end up in the beams of these dishes. That's microwave. In your microwave oven, you use that to cook soup.

So, all in all, I don't think that putting something in front of these antennas is actually feasible, and especially politically much less feasible then technologically. I still think your concept could work – just exclude the platforms from the enclosing, and maybe work with conformal light projection on these surfaces. The operators don't get a word about which pictures are projected onto their antennas :)

Not the answer you're looking for? Browse other questions tagged antenna transmitter receiver fm vhf or ask your own question.

1
Could transmit/receive turnaround be improved by having a heterodyne receiver switchable between high-side and low-side injection
1
Are the same type of antennas used for receiving and transmitting?
4
How can I reproduce ambient EM fields inside a Faraday enclosure?
1
Could a vintage 9 transistor AM/FM implement a phase-locked loop of some form?
2
Have you ever fried a wi-fi router by leaving it to work without its external antennas?
0
Understanding RF amplification
3
How to connect antenna to oscilloscope?