In response to a similar question a few years ago, Phil Frost uploaded the following diagram, which uses a pull-up resistor before the optocoupler: 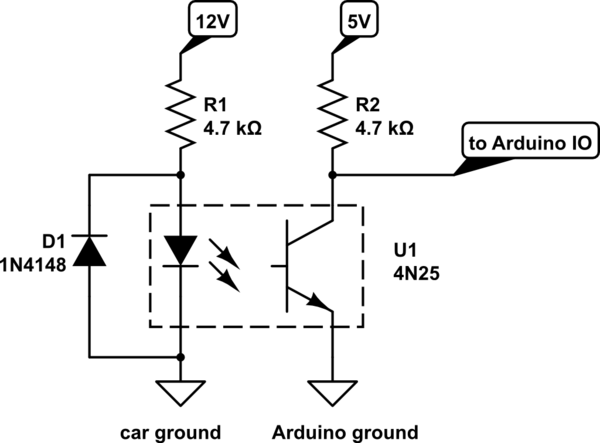 I would like to modify this circuit, such that current only flows on the Arduino side if it is also flowing on the 12V side. Here's what I've come up with: 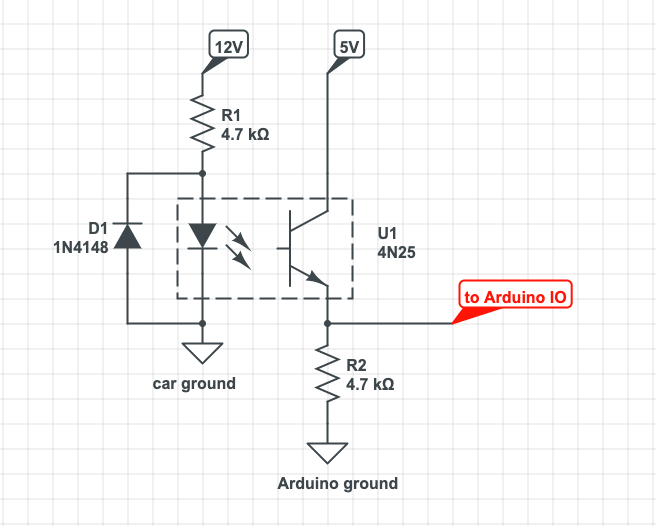 There are a lot of other details to this project, but the questions I have are just regarding this circuit:

An arduino input is very high resistance, generally in the multiple Mega-ohm to Giga-ohms, so the consumption through the arduino input will be very low, the arragements just change whether it is idle high or idle low, which as far as the arduino's actual power consumption is a hair lower if the pin is towards its positive supply rail,

If you wanted to simplify things, you could likely use the arduino's pin pullup instead of an external resistor, this way you could turn off that sensor when the lights are on, and just poll it occasionally.

The 4N25 will actually leak some current, it never fully switches off, however its generally pretty low,

Not the answer you're looking for? Browse other questions tagged arduino opto-isolator pullup pulldown or ask your own question.

1
How to fix Arduino optocoupler + LED that doesn't light up?
0
Debugging a garage door opener circuit with an optocoupler and mosfet
1
Arduino with mosfet resets when switching on/off fluorescent lights
1
Close/open a physical button circuit via Arduino
6
P-channel MOSFET as high-side switch gets hot
1
Optocoupler is not breaking circuit
4
Modify PWM controlled 230v incandescent bulb dimmer circuit
0
Designer circuit using optocoupler
3
Can I use a capacitor to power an Arduino for 5 minutes after the power has been cut?