Why choose a PMOS over an NMOS or vice versa?

I know it sounds dum and that I sound dum but theres such a large amount of MOSFETs out there, there are N-channel and P channel devices that have extremely similar functionalities, capabilities, rating's etc. why choose a PMOS or NMOS over the other when all the ratings are practically the same?

If you have two "similar" NPN and PNP transistors, or NMOS and PMOS FETs this is how you select which one to use.

If the two look like they have similar ratings, you're probably not looking at all the specifications. The PNP/PMOS part must have a larger die to match some parameter of the NPN/NMOS part which means that is is sacrificing some other parameter. For example, for a PMOS to conduct as efficiently as an NMOS the PMOS die must be about twice as large which means the PMOS will have double the capacitance and therefore be half as fast. Or it can have the same die size band be the same speed but half as efficient.

For NPN/PNP whatever is applied to the the base AND emitter terminals controls the BJT. Not JUST the base,

For a NMOS/PMOS, whatever is applied to the gate AND source terminals controls the MOSFET. Not JUST the gate.

The directionality of NMOS and NPN devices make them the simplest to use when the control signal is referenced to ground (since the emitter/source can connect to ground so that the base/gate can be driven relative to ground).

The directionality of PMOS and PNP devices make them simpler to use when the control signal is referenced to a positive rail (since the emitter/source can connect to that rail and the gate/base can be driven relative to the positive rail). 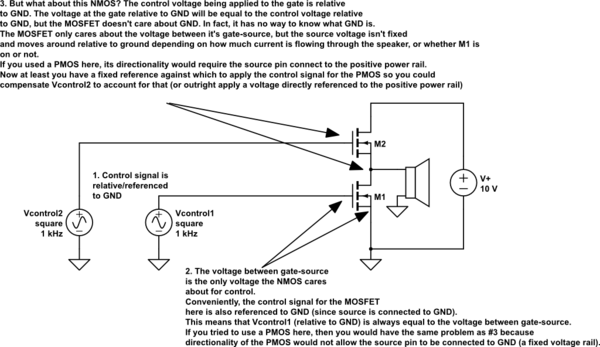 However, sometimes an NMOS or NPN is so much more efficient (or available) compared to PNP and NPN you actually do break this rule (mostly in inverters, half-bridges, and H-bridges). But if you do this then you have to go to the effort of building a circuit that converts your your circuit's control signal (which is referenced to a fixed voltage, probably ground) into a signal whose reference "floats" with the reference terminal for the control signal on the transistor (source/emitter).

NOTE: These circuits are for illustrative purposes. They don't work as shown and have numerous issues in real life.

This, in turn, is why there is a prevalence of NMOS transistors and specialized high-side gate drivers in high-power FET circuitry: it's cheaper and easier to use a complicated gate driver that lets you use an NFET than it is to try to source a PFET and drive its gate.

1: if you want to add load between supply to MOSFET , you need to use N channel MOSFET

1:If you want to add load between MOSFET to ground , you need to use P channel MOSFET

2:If you signal is +V to 0V , you need to use N channel MOSFET because they conduct when signal is +V and stop at 0V

2:If your signal is 0V to -V , you need to use P channel MOSFET because they conduct when signal is -V and stop at 0V

This functionality is fundamentally different between n and p channel devices. You'll never find a p-channel device that behaves like an n-channel one in this respect, or vice versa.

Not the answer you're looking for? Browse other questions tagged mosfet electrical or ask your own question.

2
Better way to drive higher voltages
1
What is the circuit for the PMOS driver found in synchronous buck regulator ICs?
2
Turning an NMOS with substrate terminal into a PMOS
2
What will be the value of saturation current in this series NMOS/PMOS circuit?
0
P channel mosfet as a switch on logic level
0
Parking Light And Signal light with same LED using MOSFETS
1
Can a N-channel MOSFET used as a highside switch
1
What should I look out for when driving high power relays with MOSFETs?
1
Driving Logic Level NMOS and PMOS