Designing electronics and their enclosures for the outdoors

I think the title captures it, but to expand upon this further. What are some of the best practices that you use to place electronics outdoors? Include what you do for the cases and mention issues with temperature, moisture, lightning, shock hazards, UV Damage and if your device generates heat how do you deal with it, how do you get power to it etc.

This isn't really a full answer but just to contribute.

I once spent a lot of time designing an enclosure that had to live outside in the full sun, near the beach so we had to deal with salt spray. Oh and of course management wouldn't stand for any color changes in the plastics, and metal couldn't be formed to the pretty shape ID wanted...

Most plastics either degraded in the sun or yellowed over time. We had to pick white for the sun loading effect (shining sun down on the box heats it up etc). In the end after working with our injection molding house and looking at tons of different plastics the only thing we found that met all our needs was fiberglass. Something we hadn't even considered at the start.

Then as we started looking at what would happen if we needed a fan. We started thinking about designing an air flow system that could still block water (although not salt fog)... Then someone pointed out that in the south there were problems with fire ants making their homes in electrical enclosures. Here's a pic of some wiring damaged by fire ants: 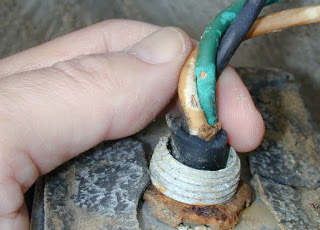 In the end we were trying to work out a way with the injection molder to include a metal heat sink around which the case could be formed to get a tight seal. Then some heat pipes from the main chips to the underside of the heat sink. Not off the shelf but we were trying to do some crazy things at the time. Never tested that to see how well it worked though.

Unless you are willing to completely encapsulate your circuitry in epoxy or similar, you will have to deal with water ingress into your electronics cabinetry. In general there is no guaranteed totally sealed box, if you have water vapour, temperature cycles and a sealed container it is a certainty that water will find it's way in.

On of the best ways of dealing with this is to put an explicit pressure equalization port in your case. In the early days we would use a fine brass or stainless mesh, that would prevent most moisture from entering. Now a days there are special membranes derived from outdoor jackets (brand name omitted here) that work very well as they prevent moisture ingress, allow for moisture egress and allow air pressure to equalize.

Not the answer you're looking for? Browse other questions tagged safety enclosure outdoors or ask your own question.

2
Designing a strong electronics holder
3
Ideas for what to use as project enclosures/cases
1
Are there any transparent enclosures or housing options out there for the Stellaris LaunchPad?
5
Waterproof enclosures
5
Are plastic enclosures safe for hobby mains voltage projects?
1
If my electronics are outdoors in a ventillated NEMA 4 enclosure, should I conformal coat my circuit boards?
0
What method can be used for outdoors circuit protection when transmitting DC or analog signals?
0
Air circulation and condensation in custom enclosures for outdoor project
0
Splitting/y'ing a thermocouple amongst 2+ inputs