Switching a fan on/off based on an LEDs current

I have been reading about using a transistor as a switch, but most articles talk about using 5V at the base to turn the transistor on, and 0V to turn it off, while the LED on my box has much less than that. To make it more difficult, the LED never has 0V at any time on any leg. The voltages on each leg of the LED are as follows:

The voltages were read using the ground of the power supply since that's what the emitter leg of a transistor would be connected to in order to switch power to the fan.

I have an S9014 NPN transistor and the specifications seem to indicate that it will turn on and off at the voltages indicated on the first leg of the LED, however I'm not certain about that. Also, many diagrams using a transistor as a switch include a resistor on the base and sometimes also on the collector of the transistor, but those diagrams are also often using 5V and not 1.97V.

Note: I need to keep all of the components being used to a minimum so they can fit inside the small TV box, so I can't use anything like an arduino, or a thermistor relay.

I suspect the LED circuit looks something like this (resistor values are a guess):- 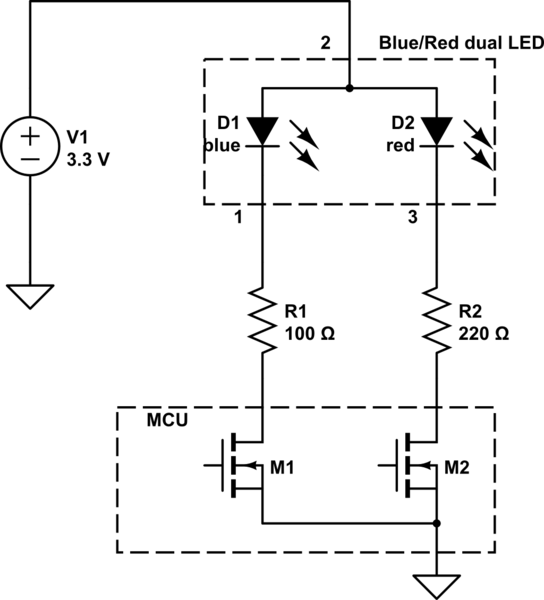 You don't see 0V on either LED leg when on due to the current-limiting resistors, and you don't see 3.3V when off because LEDs drop some voltage even at the very low current your multimeter draws through them.

If you measure the voltage from leg 2 to each of the other legs you should see the voltage drop to zero when that LED isn't lit. If this is so then you could use a PNP transistor connected with its Emitter on Leg 2, and the Base connected to leg 1 via a high value resistor. This could then switch 3.3V to an NPN transistor which turns the fan on. 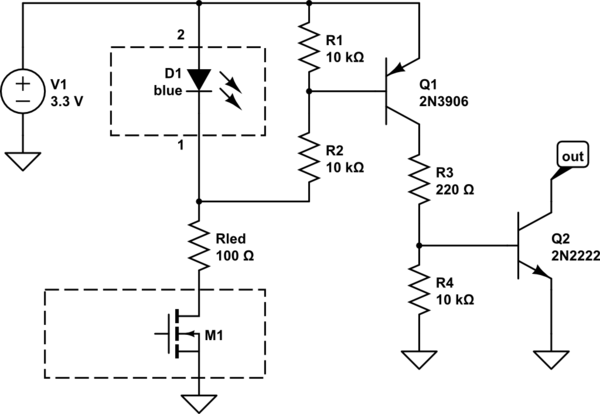 I'm sure Bruce Abbott's answer is a good one, but just as an alternative approach - and a more general answer to how do I switch something based on an LED's current - you could use an optoisolator: 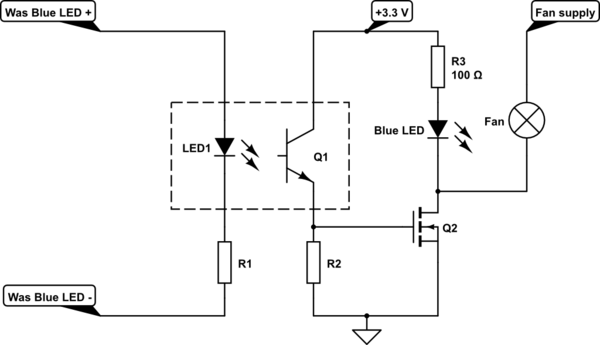 I've disconnected the blue LED from the circuit and replaced it with the optoisolator LED. I've added R1 in series because the infrared LED in the optoisolator will have a lower voltage drop than the original blue LED, and we don't want to draw more current than the blue LED did. 150 Ω or so is probably about right. A 4N35 should be a suitable optoisolator.

Q2 can switch both the fan and the indicator LED. It needs to turn on with a couple of volts Vgs; something like an RFP12N10 or IRLD120 ought to work OK. 10 kΩ should be fine for R2. If you have more than +3.3 V available, that widens your choices for Q2 - just increase R3 appropriately to keep the LED current in range.

Not the answer you're looking for? Browse other questions tagged transistors led mosfet switches or ask your own question.

1
Not use current limiting resistor for switching device on off using TIP122 possible?
0
Arduino + transistor to switch PC fan on/off
4
Switching transistor off when current is supplied to it's base
0
Switching on and off a LED light if a AC is passing through a wire or not
1
Switching two leds using transistor where one power feed still has small current present in off position
2
Use current from SMD LED to switch larger current
0
Dual led and transistor 3906 3904 switching with spdt switch on and off toggle help
0
Turning old floor fan into floor floor study light