I have a solenoid that has a coil resistance of \$0.3\Omega\$ and accelerates a steel projectile here. I've posted the schematics below.

Normal Version that acts as a control 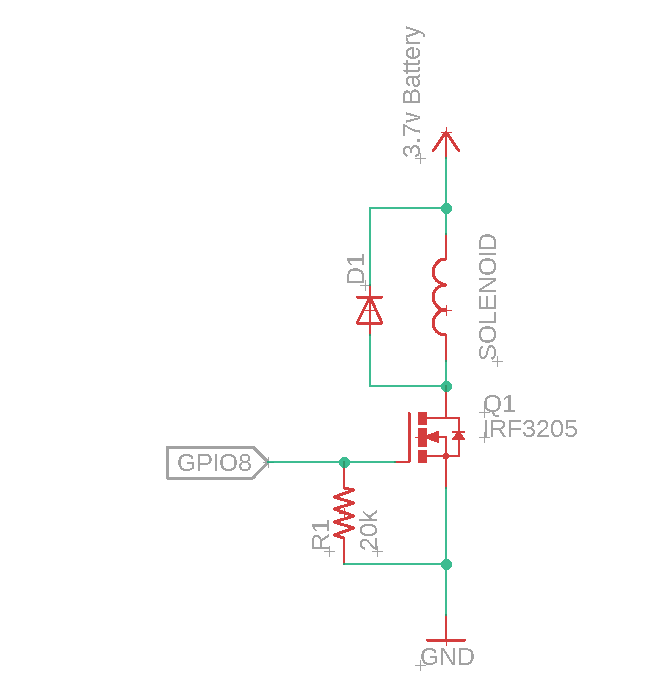 The GPIO8 goes to 5V to switch on the MOSFET and turn it off when the projectile is detected with the optical sensor. And it works just fine.

Next, I tried it with 10 supercapacitors that are connected in series. I charged it up to 27 volts. 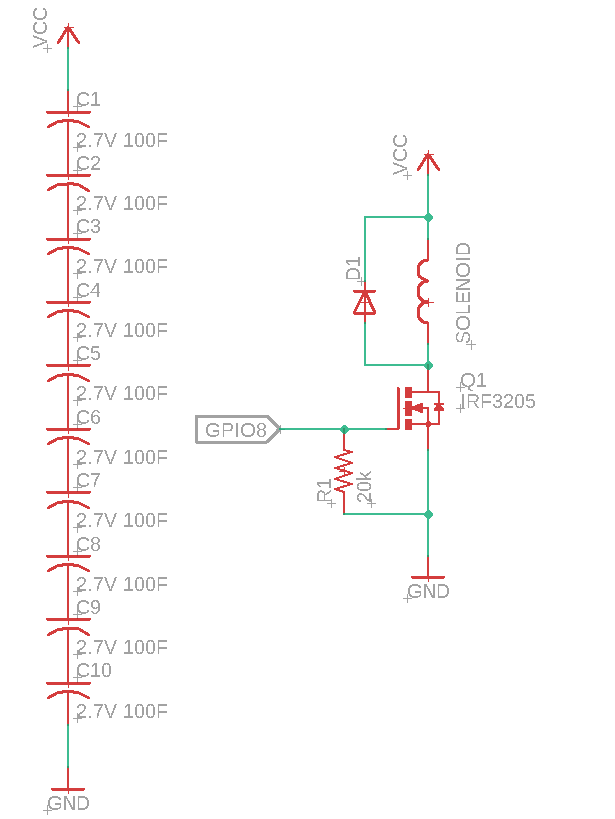 When I powered up the circuit, there was a spark when I connected the capacitor ground to the MOSFET's ground. The Gate and Source circuit should have been opened because when I first connected it, GPIO8 is at 0v.

After some troubleshooting, I found that I killed the MOSFET.

I believe there are 2 possibilities at play. First, it is possible that the parasitic capacitance on the MOSFET may have caused an oscillation and thus, voltage spike. I added R2 to increase the fall time slightly and thus, reduce the charge. See the video here (Skip to 4:00)

Not only is the parasitic capacitance causing an oscillation, but another factor is also that I actually have an RLC circuit here. My load is a solenoid and my power source is my supercapacitors. Thus I added D2 so that it doesn't start cycling back and forth. I also replaced the MOSFET with a new one. 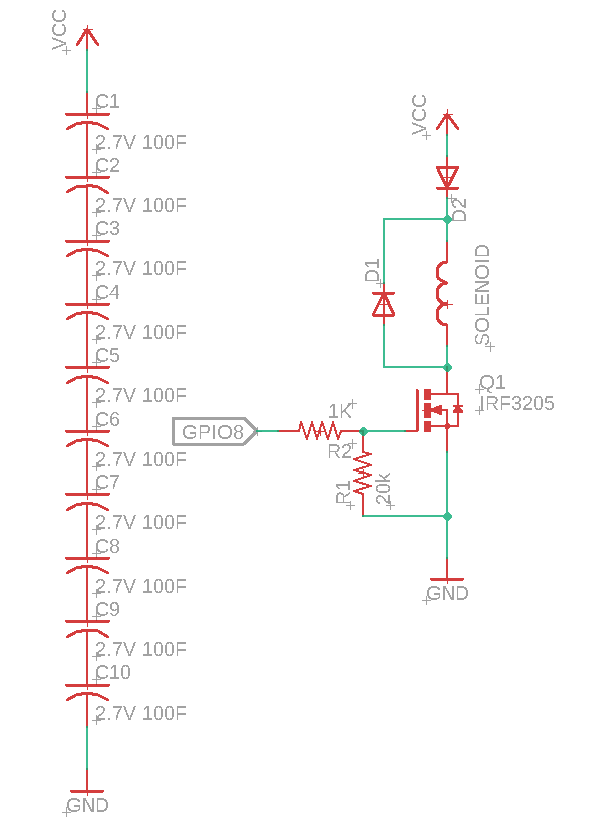 And yet the same thing happened, GPIO8 is at 0v before I connected the capacitor but the MOSFET completed the circuit anyways and broke, this time it is caught on camera.

So that's where I'm at now. My capacitor is charged to 27V and since I've added the components to get rid of oscillations, I can't think of anything else. According to the datasheet, the breakdown voltage of the IRF3205 is at 55v and I'm well below that.

According to Figure 1 in the datasheet, with 5V across the gate-source and 27V across the drain-source (I'm ignoring the solenoid resistance since it drops relatively little voltage), the MOSFET saturates at 10A. That's 270W being dissipated in your MOSFET.

And Figure 1 is at 25C. Your MOSFET is heating up while it does all this which makes it operate more like in Figure 2 where even more current being conducted. In this case it is saturating at 30A with a 27V drop which is ~800W of heat being dissipated.

With a listed junction-to-ambient thermal resistance of 62 C/W, that's a temperature rise of 17,000 and 50,000 Celcius, respectively.

Also, look up gate drivers and consider whether you need one or not for your MOSFET or if directly driving the gate capacitance from a piddly low-current I/O pin is sufficient for your application.

So, I believe the failure sequence is as follows:

EDIT Another failure mode just occurred to me:

This second hypothesis is probably the more likely hypothesis. As DKNguyen points out, your circuit as constructed will likely blow up the MOSFET even in normal operation.

As before, the best solution is to find a way to limit the peak current.

You probably aren't driving the gate hard enough. The GPIO is probably too high impedance. You want to include a proper gate drive chip running off 12-15v. You can just use a linear regulator off your 27v bus.

R2 is only hurting you by making your gate drive impedance higher in this case. I suggest dropping the value to 10 ohms.

If possible, start your tests at 1v and work your way up, making sure everything is okay. You will save a lot of silicon this way.

And please put balancing resistors across your supercaps. I don't know what the leakage of your caps is but I would guess that 1k in parallel with each cap would be on the safer side if you want to charge them to max voltage.

At the risk of sounding flippant at your expense, there is an old joke about a patient seeing a doctor:

Patient: "Doctor, it hurts when I do this."

In this case, substitute "connect the ground last" for "do this".

As to your specific failure mode, Mr Snrub is probably correct, although the inductance of the coil really ought to act as an inrush limiter.

If you are interested in an inrush limiter circuit, Texas Instruments makes one that has an evaluation module on Mouser here. The datasheet for the TPS2491 takes into account (funny enough) power limiting the series pass MOSFET (to ensure just this thing doesn't happen).

I am not sure if this will be practical for your design or not, but it's easy enough to try and to at least get an a-ha moment to understand what is happening to the MOSFET in your circuit. Good luck!

3
Actuating a solenoid through a capacitor
4
Solenoid doesn't actuate when driven through MOSFET
0
irf3205, did i kill it?
1
Wires from car battery to solenoid catching fire after connecting a second solenoid
0
Mosfet Switched capacitor in LC tank
2
capacitor mosfet capacimeter
1
MOSFET not switching solenoid lock