I have the following voltage regulator using a series pass transistor and an op amp providing the base voltage:

I have three questions:

The original schematic is the result of experimentation in the simulator, and it makes the circuit looks more difficult. For the purpose of understanding, let me redraw it. 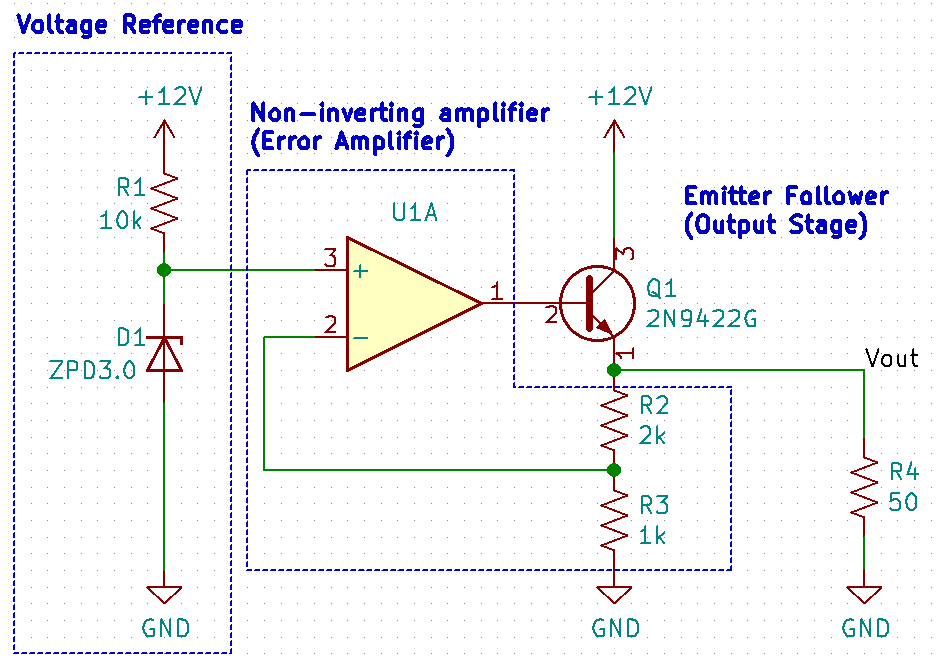 As we see, the circuitry contains three building blocks:

The non-inverting amplifier is the heart of the circuit. So first we take a look at the opamp. The opamp has three pins, non-inverting input (V+), inverting input (V-), and output (Vout). Of course, the opamp needs to use power, and we typically use them to handle AC signals (0V centered is the middle), such as audio, it needs not only one, but two DC power rails, let's call it 12v and -12v.

You can think the opamp as a differential amplifier, it only amplifies the voltage difference between (V+ and V-). For example, if V+ is 5 volts , V- is 4 volts (it doesn't matter), V+ is 1 volt greater than V-, the opamp would try to amplify the 1 volt signal at the output side.

But the problem is, an opamp is an amplifier with crazy gain, it will attempt to create a 1,000,000 times greater output than the original difference, so the output voltage starts to rise. Nevertheless, an opamp is not a perpetual motion machine, it cannot output voltage from nowhere. Eventually, it stops at the "maximum positive" voltage, which is the +12v power supply of the opamp in our case. Similarity, if V+ is 1 volt less that V-, the opamp shoots its output straight to the "maximum negative" voltage, the -12v power supply. As the gain of open-loop opamp is so large, it means the slightest imbalance between V+ and V- will make the opamp output swings from +12v to -12, back and forth.

Also, input impedance of V+ and V- is extremely high, it means even the weakest inputs won't be affected if you connect an ideal opamp to them, like an ideal voltmeter. Finally, the ideal opamp has an extremely low output impedance, which means Vout won't drop no matter what is connected to it.

What are the use of such crazy amplifiers? The central idea is to introduce negative feedback.

If we connect the output back to its non-inverting input (V-), something interesting would happen. Imagine, initially, V-, V+ are 0 volts. There is no voltage difference, so Vout is 0 volts. Next, we put +5v to V+, instantaneously, there is a +5 volts difference between the two outputs, the opamp starts attempting to amplify the voltage difference.

If no feedback is connected, Vout will shoot up straight to +12v. However, Vout is connected directly to V-, due to negative feedback, as Vout starts to rise, V- also rises from 0v, at the instant where Vout reaches +5v, V- will also be +5v, and V+ is still +5v. Opamp stops and reaches equilibrium. You can imagine that this process happens so fast, it's almost instantaneous.

In all negative feedback configuration, we wave our hands and assume the equilibrium where V+ = V- is reached instantaneously. Now we come to an important conclusion.

As a result, Vout of the opamp always follows V+: it takes V+, and uses its own power supply to create a replica.

Is it useful? Yes, because the opamp works like a repeater, it can receive a weak signal (like a 5 volts voltage source with a 1 megaohm resistor in series, which is still 5 volts, but the maximum current is less than 1 mA), and drive a powerful replica of that signal using its own power supply. The voltage is the same, but the output resistance is now near-zero, with nearly unlimited current. We call it a buffer.

This time, instead of connecting a wire from Vout to V-, we use R1 and R2.

This is called a voltage divider, where

Assume Vin is 5v. Again, the opamp output would attempt eliminate the voltage difference at V-. But this time, it has a voltage divider, when Vout = 5v, V- only gets 1/3 of it, so the opamp continue to rise, until Vout is 3x larger than Vin.

It's a non-inverting amplifier. 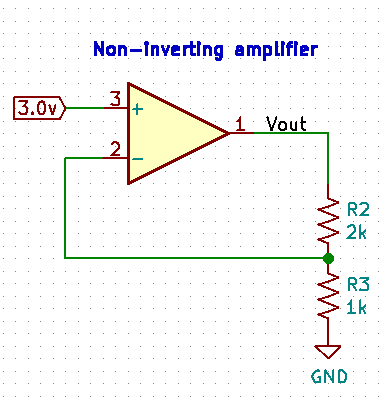 What is Vout? It's 3 x V+. If you have a unchanging reference voltage of V+ = 3.0, by changing the radio by R2 and R3, you can set the output of the opamp to an arbitrary voltage.

If you've read to this point and understood all my previous ideas, congrats, you've already understood the principle of operation of your circuit.

The output of your circuit is simply,

Furthermore, if Vout ever drops, the opamp will "notice" because V+, the reference voltage is no longer equals to V-, the "sampled" output voltage, and starts to output a higher output to correct it. Likewise, if Vout is too high, the opamp will output a lower voltage.

The opamp can notice the the slightest difference, between the actual output voltage and the intended voltage, even a 0.05 volt error, because the opamp has enormous gain. Therefore, when an opamp non-inverting amplifier is used for this purpose, we also call it an error amplifier.

If the components are ideal, all of it occurs nearly instantaneously.

Now, where can we obtain a stable 3.0v voltage reference? Using a Zener diode.

A silicon diode only allows the current to flow to one direction, with a constant 0.6 volts voltage drop across the diode. This voltage drop represents power loss, but it's not always a nuisance, because it enables you to create a 0.6 volts constant voltage reference independent from the power supply voltage. But this voltage is always close to 0.6 volts and inflexible.

A Zener diode is special diode designed to work in backwards. If you connect a Zener diode backwards, it will breakdown at a low breakdown voltage (A normal silicon power diode has a breakdown voltage of hundreds of volts, and it's not useful). Across the diode, there will be a constant voltage drop as well. We can use this voltage to create a reference voltage.

A ZPD3.0 diode has a 3.0 volts breakdown voltage. The resistor is ensure there won't be a short circuit across the diode. The proper current flows through the Zener diode can be found from the datasheet, typically ~10 mA.

Like I mentioned before, the ideal opamp has an extremely low output impedance, which means Vout won't drop no matter what is connected to it, and can output unlimited current, so an opamp itself can be used as a buffer.

But in reality, an opamp is typically used for instrumentation and low-power applications. If you use it as a power source, it will quickly overheat and may be damaged. So we won't use the opamp itself as the output stage, but use it only as an error amplifier.

A transistor in this configuration is called an emitter follower. 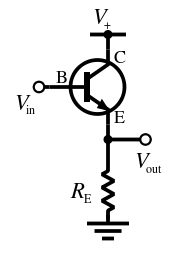 Vout is a replica of Vin, but is replicated and driven by the transistor using its own power source.

A power transistor allows higher current output, and may come with a heatsink. This is the final step, instead of driving the output directly, we use the opamp to drive the power transistor, which then drives the output.

Putting it all together

All linear voltage regulators, like a LM317, works by following the same principle of operation.

In integrated circuits, a 1.25 volts bandgap voltage reference is often used as a reference voltage and has much higher performance than a Zener diode, and allows one to build a very precise voltage regulator.

Which is why the formula for almost all linear voltage regulator is, 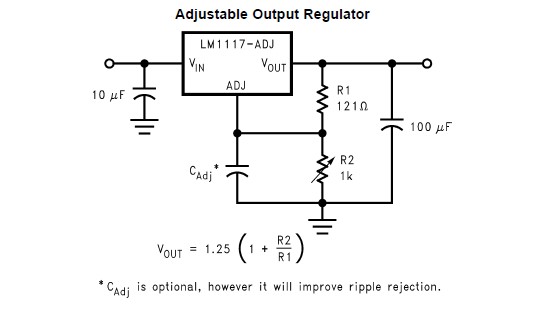 \$R_1\$ and \$D_6\$ present a very basic zener voltage concept. You must become very, very familiar with it. It should be immediately obvious to you every time you see it. The basic idea is that the resistor, \$R_1\$ helps to "set the operating current" of the zener diode (and possibly supply a relatively much smaller current to something else attached at that node.) So if the zener diode is specified to operate at \$20\:\text{mA}\$, to just grab an example current out of the air, then you'd calculate the value of the resistor to provide about that current after subtracting the zener voltage from the supply voltage. The actual current you need is found on a datasheet. So that's the place you are supposed to read for it. (My example is only a "what if" example.)

That node shared by the zener diode (\$D_6\$) and the resistor (\$R_1\$) should be a relatively stable voltage that you can rely upon. This value is fed over to the (+) input of an opamp.

Separately, there is another very simple concept you must understand: the voltage divider which is created by \$R_3\$ and \$R_4\$. This divided voltage is then presented to the (-) input of the opamp.

So, if the divider voltage falls, then the value presented to the (-) input will also fall and this will cause the output of the opamp to rise, in response. Since the emitter of the BJT follows the base voltage and since the base voltage equals the opamp output, this means that the opamp output will rise causing the emitter to also rise, therefore causing the voltage output to rise and therefore the divider voltage to rise in response. In other words, if the output tries to decline, the response of the system is to pull upward on the BJT emitter thus raising the output voltage to counter this change. Exactly what is desired.

Similarly, if the zener voltage itself were to rise (we supposedly "trust" the zener voltage), then this means the (+) input rises and therefore the opamp output rises, too. That pulls up on the emitter of the BJT causing the output to increase. Which is exactly what should happen. The output voltage follows the zener voltage.

So the inputs are correctly connected up.

The opamp just provides a lot of voltage gain. So any slight difference between the (-) and (+) inputs is greatly magnified at the output. This helps to keep the two inputs of the opamp very, very close in value to each other. Close enough, in fact, that you can consider them "virtually equal" to each other.

I'll leave the rest for you to work out. I think the above discussion, if you think closely about it, will lead you to a good answer for your third question. (As well as the other two.)

Not the answer you're looking for? Browse other questions tagged operational-amplifier transistors voltage-regulator or ask your own question.