I have a voltage divider configuration for biasing my transistor. The gain of transistor is lets say 150 which is typical value for BC547.

What I want is limit the current flowing through the base to be 10 micro amps.

Doing the Thevenin's analysis gives me the Thevenin Voltage(Vth) of 6V and the Thevenin resistance (Rth) of 500 ohms. So I redraw the circuit with Rth in series with the transistor and the input voltage being Vth=6V. The B-E on voltage is 0.7V. So doing the calculations gave me the current of 10.6 milli amps.

Instead, I choose to go with the design in figure 2. Since I know that the voltage divider produces the voltage of 6V, keeping a resistor of 530 kohms does the job of limiting the current through the base to 10 micro amps. 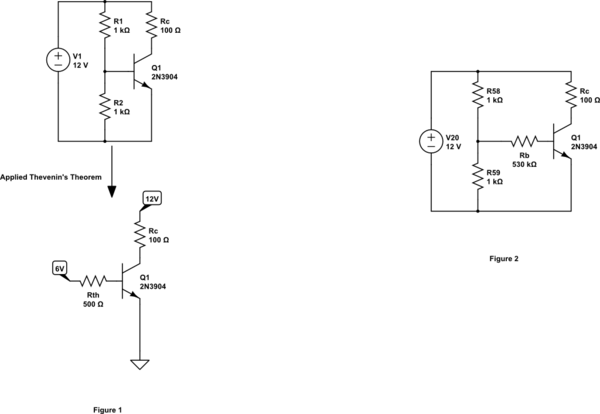 Looking for conceptual explanation rather than mathematical one.

If you were going to do what you proposed in Figure 2, then why bother with the divider at all? Just use a resistor connected to +V with the appropriate value to produce the desired bias base current.

But this is BIASING, not just sending a lone current through the base-emitter. Biasing implies you might end up having another signal ride on top of (superimposed onto) the bias current something (i.e. using a DC-blocking capacitor to couple an AC signal onto your bias current). A series resistor like Rb will muck that up. This is why you don't want anything resembling a series resistor like Rb there.

Using a divider with Thevnin to analyze it lets you come at it from the perspective of current through the base-emitter while not actually having a series base resistor which would interfere with any AC coupling you might attempt.

My analog knowledge is not well-developed and very rusty, but I think that's pretty much the gist of it.

Not the answer you're looking for? Browse other questions tagged transistors voltage-divider thevenin biasing or ask your own question.