The range of 5-80 V results from several measurements (40, 68, 75, 5, 30, 80 V) after dis- and re-connecting the SPD to the wall socket, without effect of connecting a tablet charger or nothing at all to surge protector outlets).

Questions: Is this difference of 5-80 V AC normal? Why is this difference? Am I getting sth. wrong? Possibly result of phase shift b/o "non-Ohmic" elements in surge protector (might skew Null position, but should not affect grounds, right)?? (sorry for my ignorance if this is possible at all)

EDIT: As suggested by Justme (thanks!), I added measurement of resistances (see updated drawing in Fig. 1), suggesting that the conncetion between the SPD plug and SPD outlet grounds is fine, but not the wall socket ground of spcifically the one wall socket I had chosen for the SPD (Fig. 3)!

Fig. 1: delta-U of 5-80 V difference after surge protector. Dotted lines indicate measurements with multimeter (Fig. 2): Grey, as expected only mV range (esp. between heating tubes and AC ground); orange, unexpectedly high AC voltage difference. The two ground wire contacts in the sockets are in standard position (German "Schuko-Steckdose") and connected to each other. Drawing to upper or lower one only for graphical reasons, no technical meaning. Edit: purple, resistance measurements. 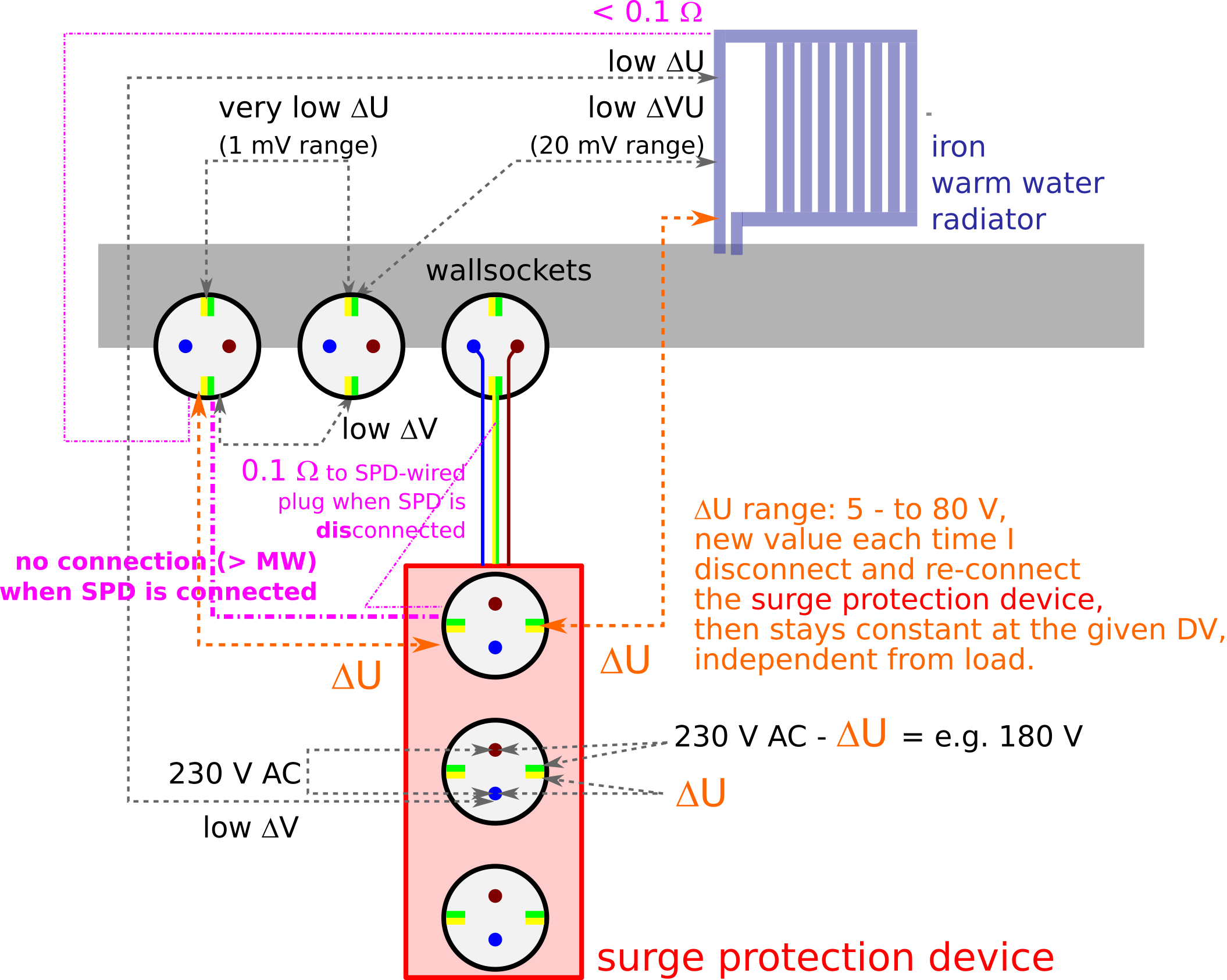 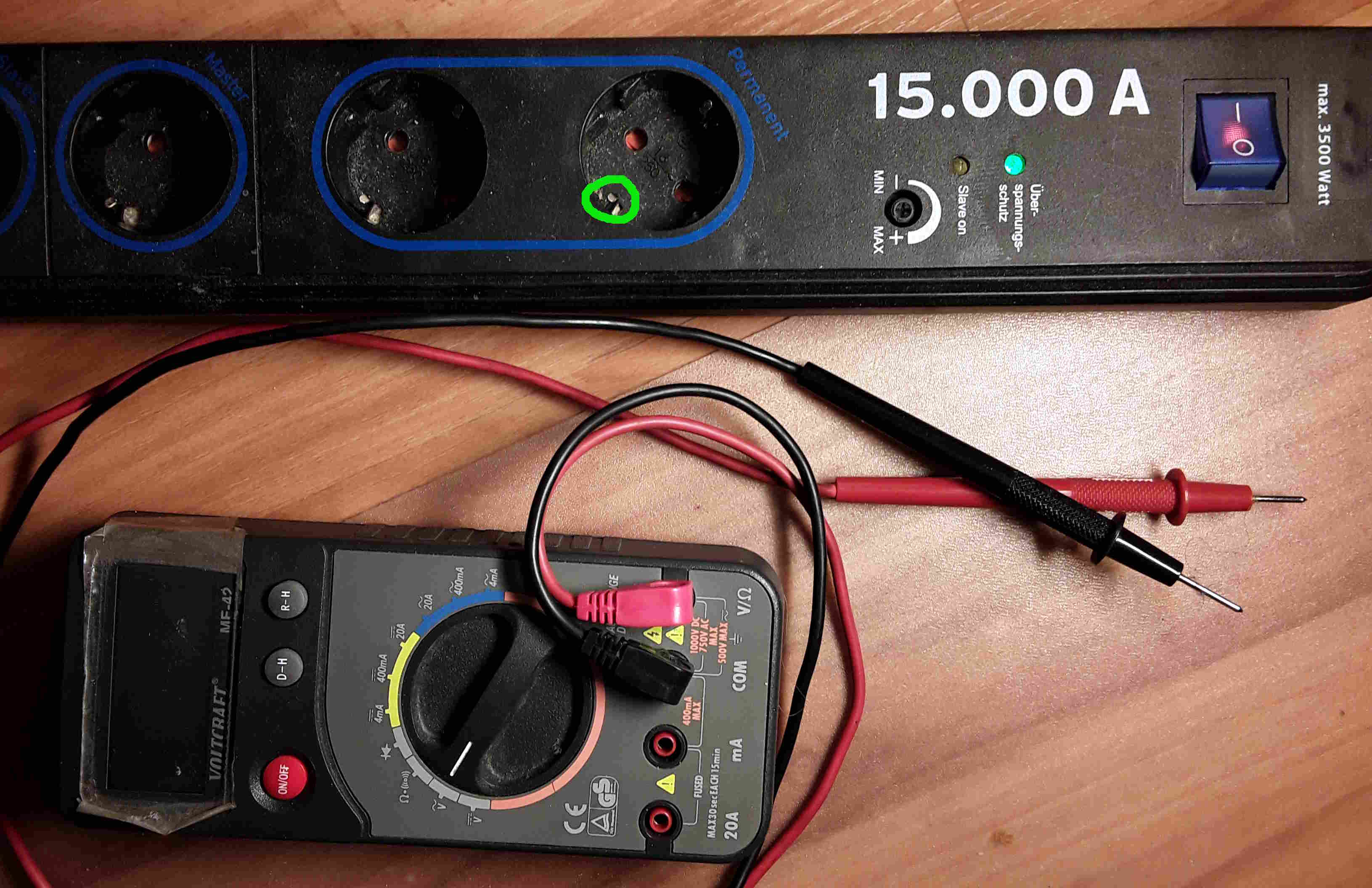 Fig. 3: Photo of wall socket outlet where the previous tenant (hope it was not a professional painter) had obviously been very generous with wall paint, adding some (imperfect) isolation to the ground contacts (red circles). Leaving the ground contacts functional would have been more important than all the semi-functional child-proof plug-locks (residual glue in the socket). This is not what I expected and inspected when I moved in in a hurry, new job, lots of things to do. The socket is behind a cabinet, making it hard to see and inspect... Lesson learned. I am glad no accident happened! Probably each dis-/reconnect cycle did or did not scratch some paint resulting in the variable (delta 5-80 V), but still bad connection. 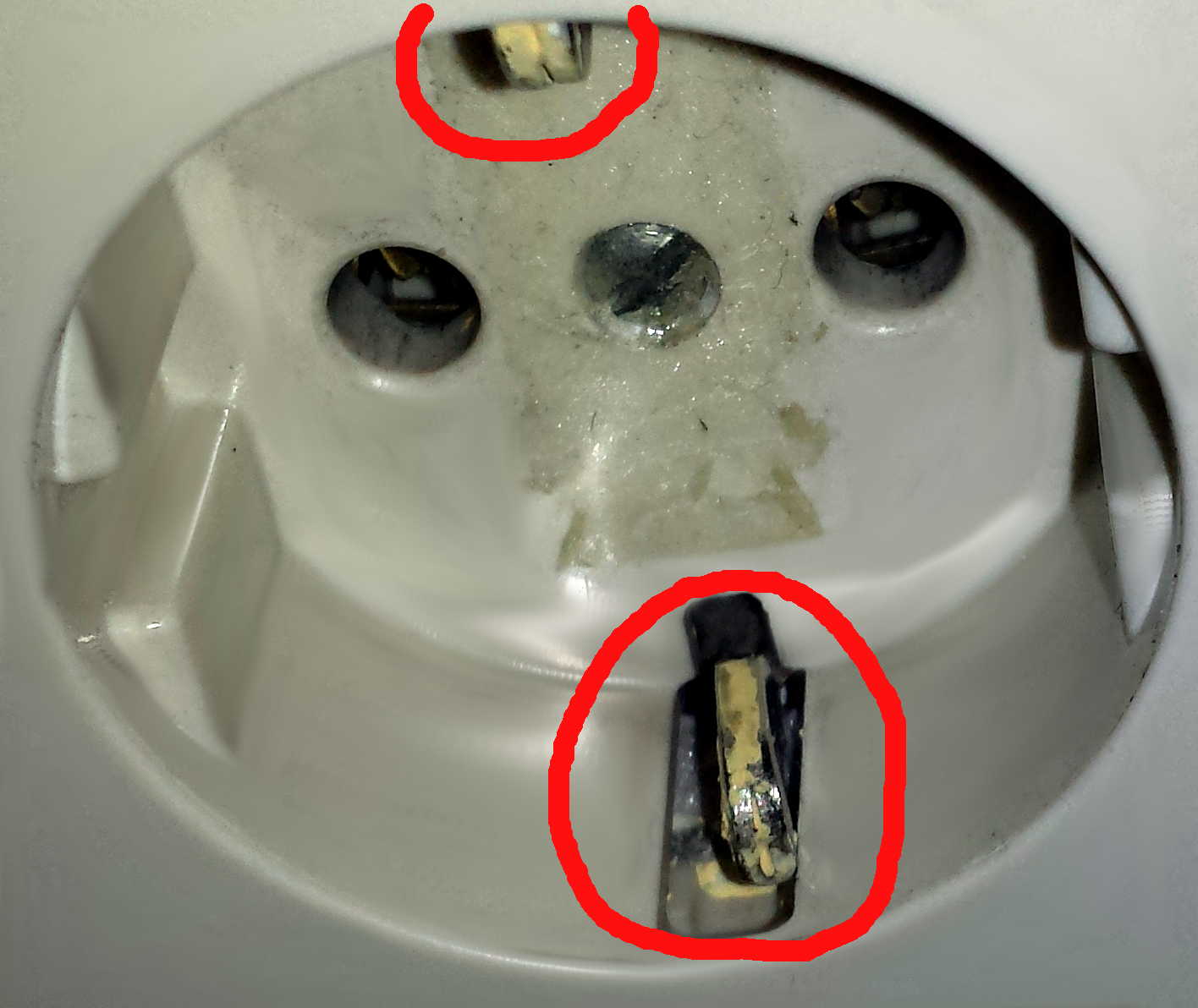 This is a sign of PE not being properly connected at some point. Check with a multimeter for bad connection or paint residue.

Not the answer you're looking for? Browse other questions tagged ac ground surge-protection phase-shift or ask your own question.