I am looking for ideas on improving the circuit below. Any constructive criticism is very much appreciated as well. The following is a long explanation how I arrived at this monstrosity, it can be skipped right away.

We have a mixed bunch of 3-rd party and our own devices sharing the same 24V power line. We would like to power them up/down using one more conductor with logic level "enable" signal. The 3-rd party devices are controlled by simple relay + driver (SZNUD3160LT1G) combination.

Our own devices are identical STM32-based boards, one of which is a master controlling that signal, the others are slaves that follow the same power up/down logic.

The schematics at the moment:

To satisfy requirement (2) I've designed somewhat universal footprint on PCB for mounting a variety of POL modules, chosen by specific power needs for each board. Some of them with dedicated EN/!SHDN inputs, like Pololu D24V5F3, the other are simple LDO substitutes, like Murata OKI-78SR. Pretty much anything with TO-220 pinout, including actual LDOs can be used.

Originally I was going to send the signal from MCU straight to EN pin, or maybe use simple buffer. Then I realized that Pololu modules have pull-ups to VIN, that would bleed 24V back to signal line, breaking requirement (4). After considering depletion MOSFETs, analog switches and solid state relays I've decided to use inverting gate driver for this. 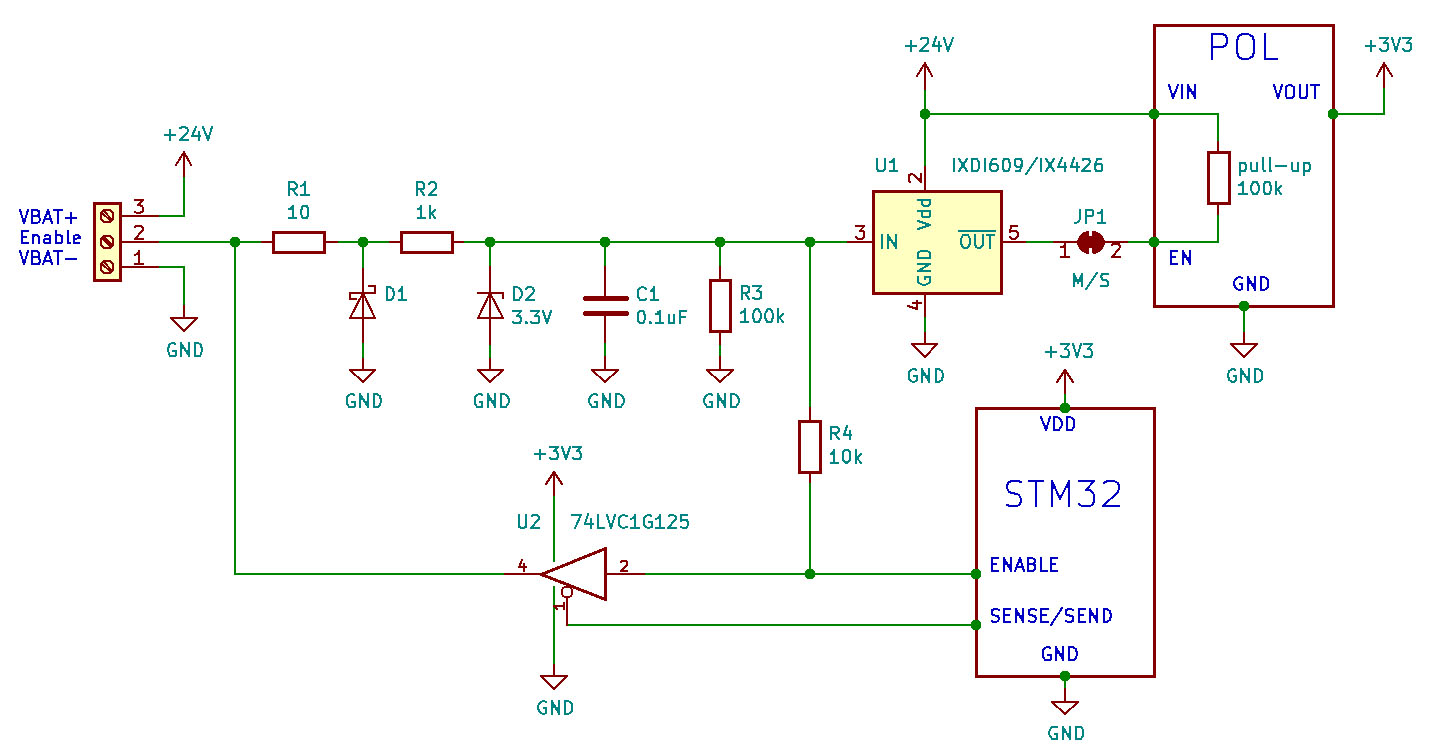 Ok, it looks like the original circuit was wrong, so here is updated version. Not only old one had self-latching power output, but it also allowed voltage to be applied to un-powered chips not designed to tolerate it. Hopefully all fixed now. Unfortunately, instead of simplifying this made it more complex.

Browse other questions tagged power stm32 dc-dc-converter pololu or ask your own question.

2
Is it OK to use internal pull-down as part of voltage divider?
2
Designing a CANbus+DC power network of sensors

1
How can I matrix switch multiple lines, including power?
0
Best way to control power with MCU gpio pin
0
Is it possible to control DC-DC boost convertor by N-ch MOSFET @ Vin-?
0
Hardware architecture for power
0
Secondary/Failover power for board
1
How to recieve data over SPI as a master device?