I'm working on a project to control power sideview mirrors in a car, with features like TildDown, that tilts some of the mirror down helping to park. The circuit is pretty simple, but I'm having some difficulty to turn the power mirror motors with my microcontroller.

It needs to be a Half H-Bridge kind of circuit for powering the motors because each motor pin needs three states: VCC (+12V), GND and high impedance (opened). In that case, I'm having two outputs of the microcontroller for each motor pin, one to toggle between the High and the Low Mosfet and the other to act as an enable for the Half H-Bridge, so when it is in '0' none of the Mosfets gets triggered and the Motor won't turn on doesn't metter the voltage of its other pin.

So I need a driver, that accepts a 5V input and an around 12V output, to connect my microcontroller to the Half H-Bridge, with the following truth table:

I have seen some Half H-bridge Driver ICs, like the IR2104, but it seems like they are indicated for PWM application, which isn't the case. I'd like to know if there is a driver similar to the one I'm looking for or if there is any other solution for the problem. I know it may seem confusing why it can't be a simple mosfet activating the motor with VCC and GND, it is because the motor of the power mirror have a common wire and I need to control each one individually, so I need the phase pin of the motor that I don't want to move to be high impedance while the phase pin of the other motor is in GND for example (which is exactly what the power mirrors switch does in the car circuit for controlling each mirror individually).

Thanks in advance and sorry for the bad english!

Due to all the tips received, I think I finally have a working circuit. As you can see in the schematic picture, the output has the three stages: VCC, when the input thats connected to Q3 (which will be an output from the microcontroller) is in +5V; GND, when the input connected to Q1's gate (also an output from the microontroller) gets high or when optocoupler out put gets high (controlled directly by the power mirror switch, allowing the mirror pin to be GND in manual adjustments); and the most important, if none of these signals get high the motor pin floats and it won't conduct. I've also added the bipolar Q4, that completely turn off the Mosfet Q1 when the high side signal is on, doesn't metter the value of the other signals, avoiding both Mosfets being activated at the same time, causing a short circuit in the +12V supply. 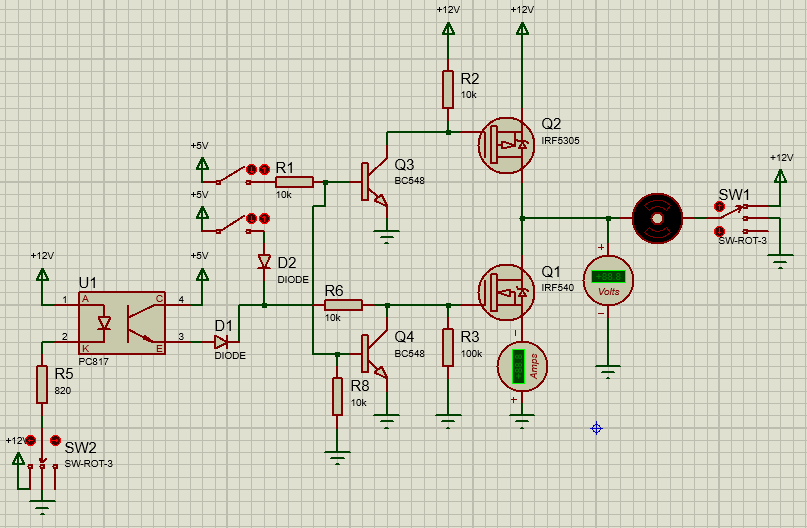 I've tested the circuit in a protoboard and it worked perfectly, it also drains almost any current from the digital signals (around 10mA, which is good for Atmega328p outputs). I'm planning to use smd components in the final project (SOT23 package): for the bipolar I'm using BC817, and for the mosfets I'm using SI2319DDS and PMV55ENEAR, channel p and n respectively. I looked at the Mosfet's datasheets and they seem to be appropriate due to its low RDSon and high ID current. I'm just concern about the evetual eletromagnetic noise in the car that can trigger the Mosfets unwanted because of the low VGS threshold.

If someone know some issue I may have because of the circuit desing or because of this components in the automotive enviroment, please, let me know. Thanks for all the help!

Try and think about it carefully and see if you understand why Q1 or Q4 can never actually turn on completely or properly. If you are stuck, see here: Why choose a PMOS over an NMOS or vice versa?

Or think about an electromechanical relay. It has two coil pins for control and two contact pins for the primary power flow. You would never ever apply a signal to one of the coil pins while ignoring the other coil pin and expect it to work right?

A transistor is the same, except one of the coil pins and one of the primary contact pins is fused together (the source pin on a MOSFET is a bit like a fused version of a relay coil pin and contact pin). That means you cannot apply a voltage to the gate and expect it to work without taking into account the relationship with the source pin. That's pretty much what you are doing here.

Unlike a relay, since a control and primary current flow pin are fused in a transistor, it means that any load connected to the source pin can influence the requirements of the control signal so your gate drive requirements can get trickier.

Answer to the update:

You should be fine about EMI triggering the gate. You can always decrease the gate pull resistors to 10K or even 5K. Or add a a small capacitor between the gate-source to artificially increase the gate capacitance so it takes more EMI to trigger the gate. This works because slower switching speed is not a concern here since you aren't PWMing at high frequency so switching happens infrequently so extra heat from slow switching is minor.

Not the answer you're looking for? Browse other questions tagged dc-motor driver h-bridge mosfet-driver atmega328p or ask your own question.

5
Bootstrap circuit function
0
Why choose a PMOS over an NMOS or vice versa?