In optical LIN converter PCB there is a weird element glued: A plastic ring with resin/ plastic fulfillment.

Is it some sort of local coating or chip-on-board encapsulation? There are no elements in this area on the opposite side of PCB, just 2 Vias. 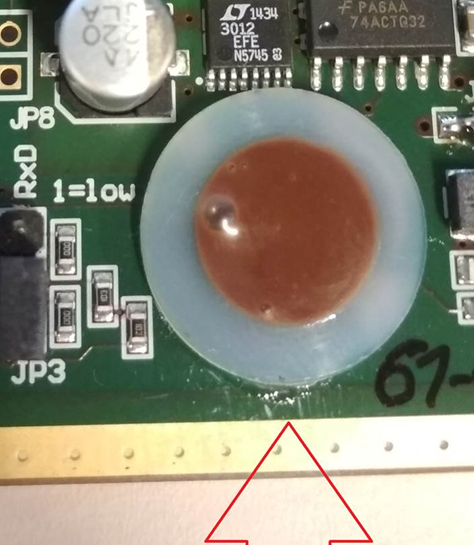 In the PCB industry this is called component potting.

The white ring is there to ensure the pouring of the resin can reach the required height and not spill on the nearby components. What component is under there is tricky to know but you can make educated guess:

For me looking at the size of this I would tend to say it is a trimming potentiometer that was sealed after calibration, the white ring being there to ensure the resin was poured high enough. The resin making the calibration more permanent than anything else (that is maybe why they have gone with this instead of a dab of glue).

This might be entirely wrong, I am not the one who designed this.

From the extanded details of the later answers and comments ! It is clear that I was wrong... I think we can now confortably assume that the potting was done as a sound insulating feature to reduce audible noise from the SMPS (that was the ahah factor I think).

In rare cases it may be necessary to varnish/encase the entire powersupply in potting material to reduce audible noise.There are many companies that make these electronics insulation resins and polymers for these applications such as Elantas Electrical Insulation,EpicResins and ITW Engineered Polymers. (cited from http://www.ti.com/lit/an/slua821/slua821.pdf)

That was a very good question ! I definitely learned something new. And I wish more powersupply manufacturer would implement these.

Found whats underneath in documentation. 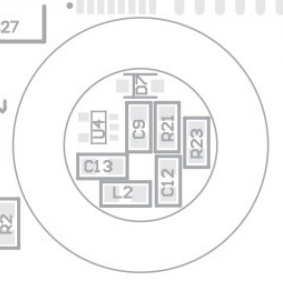 Not the answer you're looking for? Browse other questions tagged pcb identification components pcb-assembly or ask your own question.

13
Homebrew PCB tips?
1
pcb etching paper and copper board
12
How would one attach an optical fibre to a PCB for a display?
4
Good method to remove tenting on vias after assembly for debugging?
1
Power supply positioning in PCB design
3
Guard Ring Nuances
5
Securing a PCB board to a plastic casing - can I just glue the bottom?
0
Decoupling cap on backside: Create separate via?
1
Thermal stabilization of TH LED (layout recommendations)
4
Grounding PCB Within Aluminum Enclosure