We've noticed that off-the-shelf LEDs exhibit some change in the shape (and sometimes peak) of their spectrum as the amount of current flowing through them changes.

For example, a UV LED we tested showed the following change in the shape of it's spectrum when we changed from 0.2 mA (black line) to 2 mA (orange and green line). 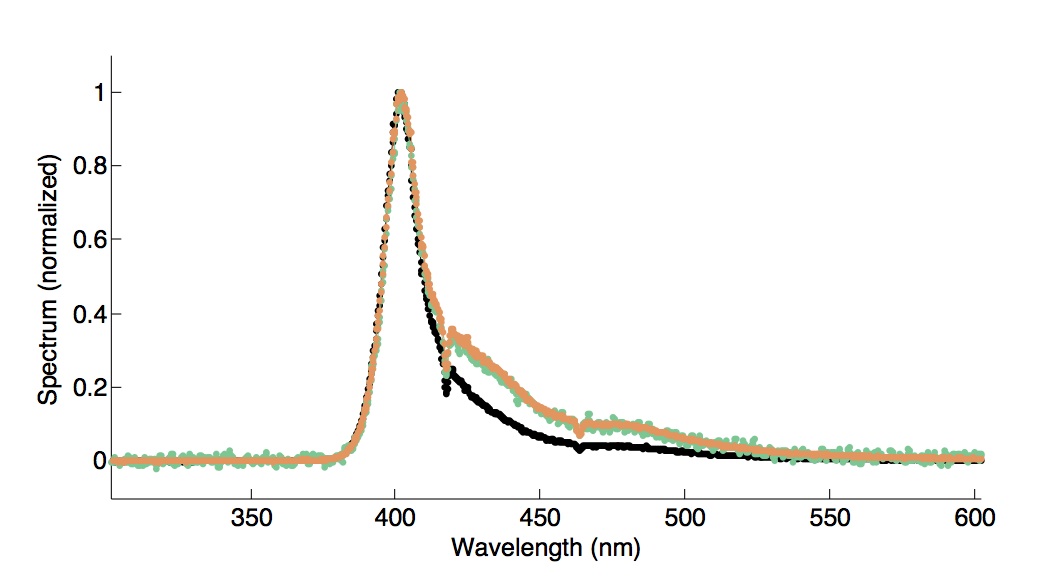 According to some information I've found, the magnitude of this effect may relate to the quality of the semiconductor crystal used during manufacturing.

I'm wondering if anyone knows of a supplier that produces extremely high quality LEDs that may exhibit more stable spectra. Or, perhaps there is another solution someone is aware of to improve the spectral stability of LEDs vs. current.

It might be better to talk to an apps engineer at the the company that makes your LED's. there are several mechanisms possible that will cause wavelength shifts and unfortunately the solutions are often are at odds. HEre are some scenarios and possible solutions:

1) if it's a heating effect and wavelength is shifting with atomic spacing change then PWM might be the way to go. BUt this would manifest itself as a broadening of the spectrum, you seem to be getting peaking at certain wavelengths. The activation energy of that subsidiary peak should tell the manufacturer something.

2) but the effect might be from ballistic transport of the carriers which are then causing spectral spreading collisionally - in that case a DC approach would be best as you want to avoid current spiking.

3) higher current means a larger volume involved with conduction which means a greater chance of interacting with dislocations and crystal defects and traps.

One such LED that immediately comes to mind is this one: https://www.sparkfun.com/products/11393. It has a well-defined spectrum (at least according to the datasheet): 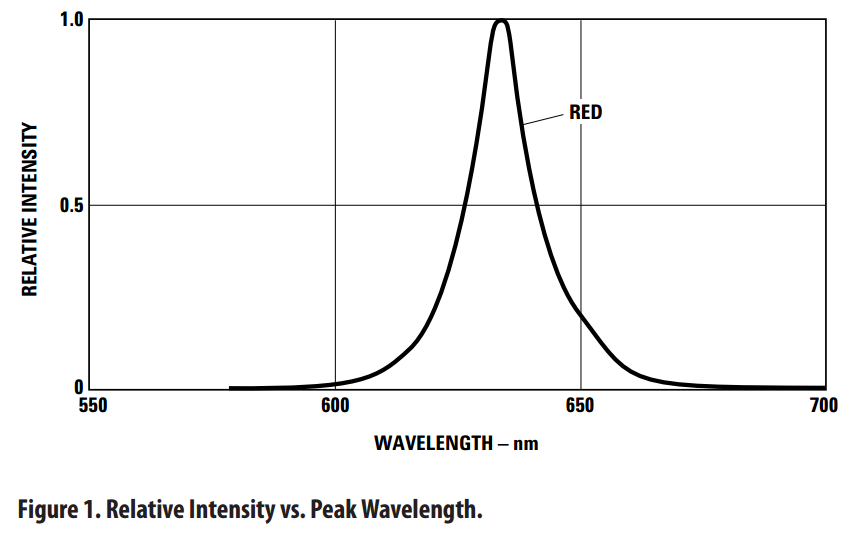 You can get them on Mouser, but it looks like SparkFun has the better price (they're trying to get rid of them).

Avago is the company that makes this particular one. If you do a search on their website for Well Defined Spatial Radiation Patterns, you'll get a bunch of other LEDs similar to this one. I'm sure there plenty of other companies that produce these kinds of LEDs.

Use PWM instead of DC. This way you always have one current level, but you are just varying the average power.

If price is not important for a small qty, why play with conventional LEDs and why not use semiconductor lasers?

I superimposed your graph with some semiconductor laser responses.

The critical difference between conventional LED and laser LEDs is the resonant properties which shape the spectral purity and emission beamwidth.

If you are planning to get into Bio-engineered products or low cost Spectroscopy exactly what are your other requirements besides lower spurious sidebands of emissions?

Not the answer you're looking for? Browse other questions tagged led spectrum or ask your own question.