How are unbalanced coaxial cables used for broadcasting TV signals without any problems?

As far as I know, in telephony STP or twisted pair cables are used. This creates balanced line impedances which is useful to mitigate for common mode related interference.

So using balanced cables in telephony and in audio is crucial to get rid of any EM or RF interference.

On the other hand, in TV broadcasting or many RF systems coaxial cables are used. And most of the coaxial cables I have seen are not balanced. I can see that the 50 Ohm concept is good to get rid of reflections in transmission line theory. But how come the unbalancedness of coaxial cables causes no problems with impedance balancing issues?

But how come unbalancedness of coaxial cables have no problem in impedance balancing issues?

The beautiful thing about coax is that the shield shunts mostly all external electric field interference to ground and the inner wire is largely unaffected. For an external magnetic field interference, a subtle thing happens; the current that flows in the shield due to the presence of the field creates a volt drop along the shield and, due to near 1:1 coupling between shield and inner, that identical volt drop is present on the inner core.

If you do the math on the external fields produced by a regular signal sent down a coax and analysed the fields from send and return currents individually, you find that at all points outside the shield, the opposing magnetic fields exactly cancel to zero. There is no magnetic field outside a coax from a regular coax signal.

That may be a little hard to swallow but if you go back to the theories of magnetic fields associated with a tubular flow of current, an external field is produced but no inner field. The reverse is entirely true; a magnetic field inside a tube induces no voltage along the tube AND, given there is no external field, the shield has zero inductance.

The upshot of all my rambling is that it works despite having a significantly unbalanced impedance regime between inner and outer shield. It’s not all that easy to immediately see I grant you so hopefully I’ve done it some justice.

Andy talks about how coax works in general, but another point is that video generally doesn't have the same SNR requirements as audio to begin with. Data with 8 to 10 bits per color channel provides very good pictures, and this represents an SNR of only 50 to 60 dB.

On the other hand, to be considered "CD quality", audio must have at least 16 bits of resolution, equivalent to an SNR of almost 100 dB.

Telephony is a special case. While it doesn't require a lot of bandwidth, it does require a dynamic range equivalent to 13-14 bits. (But the coding used reduces the SNR to about 7 bits). UTP (unshielded twisted pair) is used only because it is so cheap to make and so much of it is required.

The main technical difference is how they reject interference. Twisted pair relies on the interference affecting both wires equally, generating common mode noise that is easily rejected by the differential receiver. This works well for magnetic interference down to very low frequencies.

So which is best depends largely on the frequencies involved and the type of interference that may be present, but it's not the only reason to chose one over the other.

Analog telephone lines often have to run close to power lines over long distances while carrying fairly low level audio signals. The human ear is quite sensitive to power line harmonics that coax would would not be able to reject. Coax cable is also bulkier and more expensive, which is a big deal when you have to run thousands of them over many kilometers. Imagine this, but with 1800 individual coax cables bundled together... 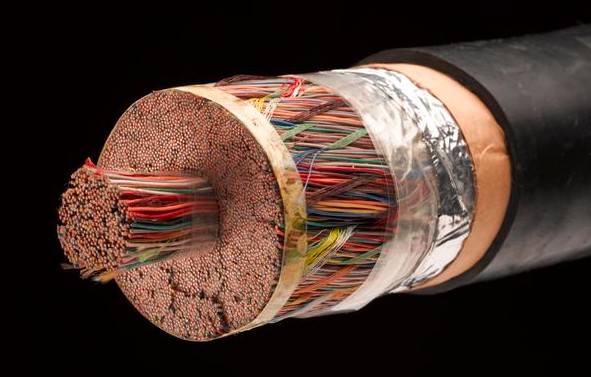 Twisted pair can also work well at higher frequencies, but the cable dimensions may be inconvenient. TV sets used to use 300Ω 'ribbon' cable, which actually has lower loss than standard coax at VHF frequencies. But it was annoying to use because it had to be kept away from the metal roof etc., was prone to weather damage, and a balun was required to convert to 75Ω unbalanced at the receiver.

At higher frequencies coax has the advantage of lower loss and wider bandwidth in a robust cable with excellent shielding, and the unbalanced signal is easier to interface to. Cable runs are generally short so cost isn't so much of an issue - except for CATV, but then (unlike telephones) each subscriber doesn't need their own circuit so a single cable could serve thousands of viewers (modern CATV is mostly fiber optic so coax runs are much shorter).

Coax cables are commonly used in audio to connect between components and inside equipment, despite not being very effective against low frequency magnetic interference. However the circuit impedances are generally in the 1k to 1M range so magnetic interference (which generates high current but low voltage) is less of an issue. The coax still protects against electric fields (which have more effect at higher impedance) and rf interference of all types. Low level audio signals may need better protection, and then shielded twisted pair is often used. This combines the advantages of both cable types.

I can see that the 50 Ohm concept is good to get rid of reflections in transmission line theory. But how come the unbalancedness of coaxial cables causes no problems with impedance balancing issues?

Balanced or unbalanced makes no difference for impedance matching, and precise matching isn't always required anyway. If the cable length is much shorter than the signal wavelengths then reflections aren't a problem in most applications. Nobody cares about coax impedance in audio applications, and even composite video (with a bandwidth of ~6MHz) isn't visibly affected by unmatched cables in equipment cables.

A completely separate reason that coax is favored for TV is frequency response.

The losses associated with twisted pair rise rapidly with frequency, to the point where DSL modems struggle to use even the lowest 10 MHz of bandwidth on analog phone subscriber loops. For the same reason, high-speed Ethernet (1G, 10G and up) over twisted pair is limited to very short physical link lengths (100m at most) — and requires a lot of modern technology to get there.

Coax, on the other hand, has (and has always had) reasonably low losses at the VHF and UHF frequencies required for TV (10s of MHz through 1 GHz).

In a simplistic view:

Coaxial cables roll up the flat earth view so that it does have a strong symmetry and no 'outside' (previously the 'below).

That said, balanced cables are very beneficial when properly used. Do note that it is the impedances to the common point that are balanced, not the 'voltages' (which have an arbitrary reference as they are always potential differences). Balanced systems act like Wheatstone bridges where nothing flows in the cross linked arm.

Not the answer you're looking for? Browse other questions tagged telecommunications coaxial stp or ask your own question.

5
Why is a coaxial cable unbalanced?
1
Confused with electrostatic pickup and capacitive coupling terms

2
(Textbook error?) Nyquist's relation: telegraph speed of transmission
1
How to pick an amplifier for very fast transient signals?
1
How to select a coaxial cable for 5kV DC and 0.1 mA
8
Why are coaxial cables typically faster/longer than twisted pairs?