I want to create an ENABLE signal driving a Murata OKI-T/3-W32P-C DC-DC converter, where the P stands for Positive Polarity of the On/Off Control line: the line has an internal pull-up, which means that the converter is on when the Control line is open or high, and off when pulled to GND.

So what I have right now is a DISABLE signal, based on an N-channel enhancement-type MOSFET (2N7000). 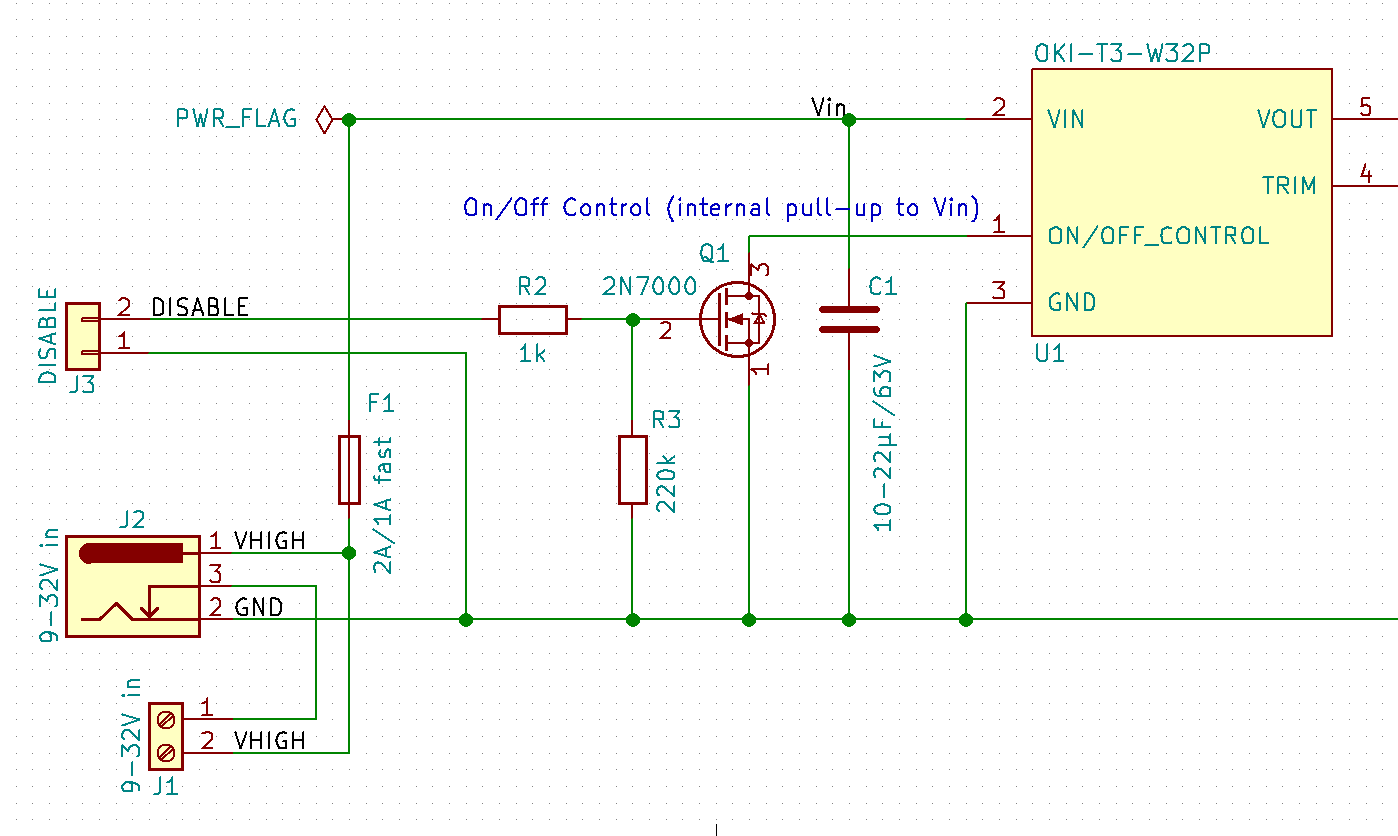 From what I read online, the easiest way to turn this setup into an ENABLE signal would be to use a depletion-type MOSFET, but I understand that these are rarely used? Or are there depletion-type MOSFETs that are generally recommended just like 2N7000 and other general-purpose transistors?

So here's the adjusted schema following @peufeu solution (thanks for providing a complete solution + explanation): 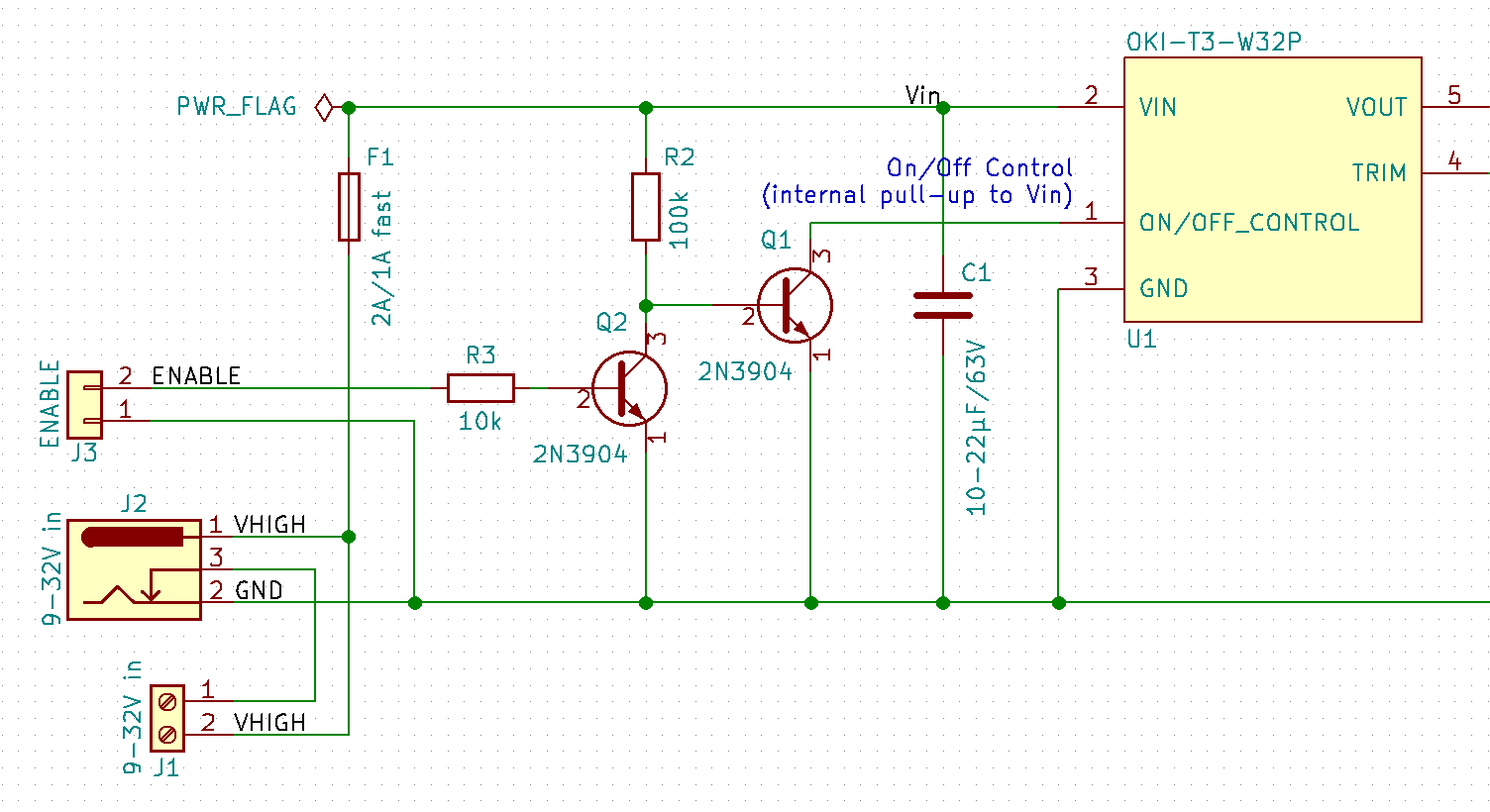 Which leaves me with the question whether this is the general way to go, or whether the MOSFET-based solution can/should be used when Vin is not as high as 32V:

In the datasheet for this OKI-T/3-W32P-C module I see that there is simply a switch symbol. But in the datasheet for the ABB ABXS002A3X41-SRZ module (fig. 27 on page 11), for example, there is a N-channel/enhanced MOSFET in the circuit. Is that because the max Vin in this case is only 16V? which means that a 2N7000 could be used directly here, as its max Vgs is 20V continuous? 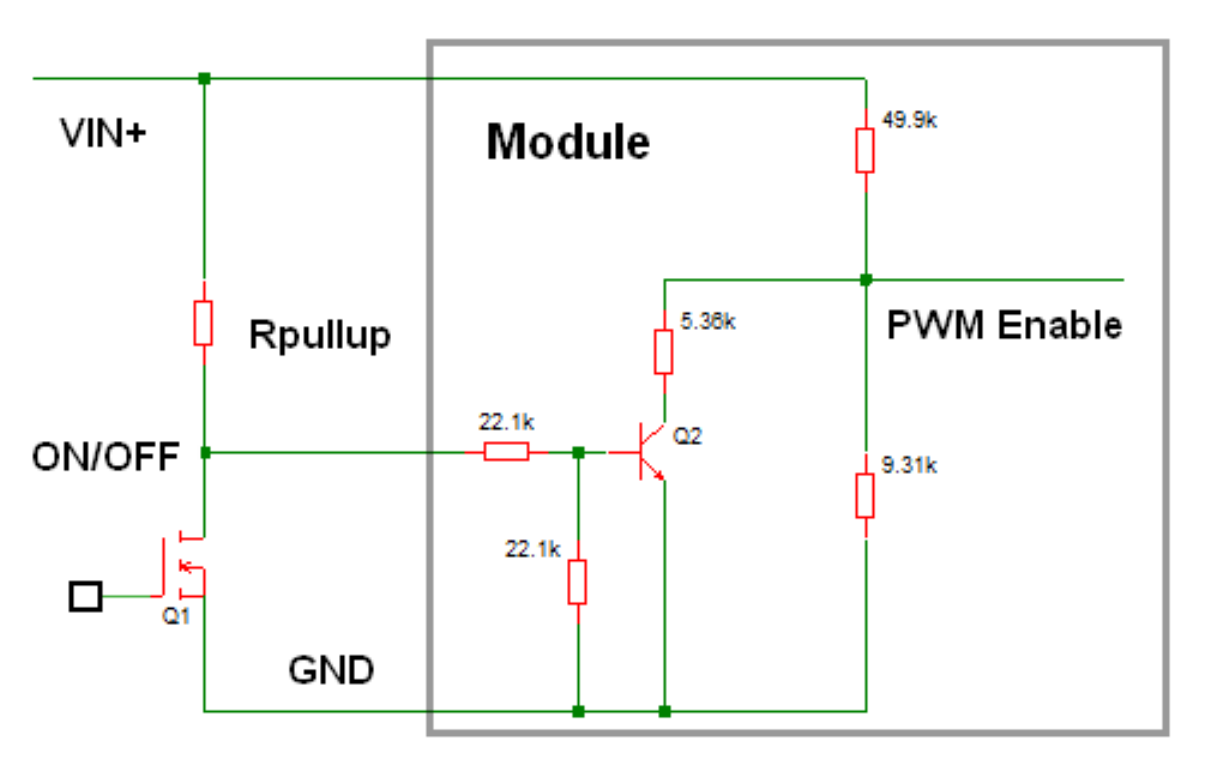 Similar thing in the datasheet for the Murata OKL-T/6-W12 module: Fig. 7 on page 15 shows the P-channel/depletion setup (for a module with negative logic) that I initially thought I could use. This module has a max Vin of 14V, so in this case a MOSFET would be able to handle it without level shifting? And if so, what transistor would be a good candidate? 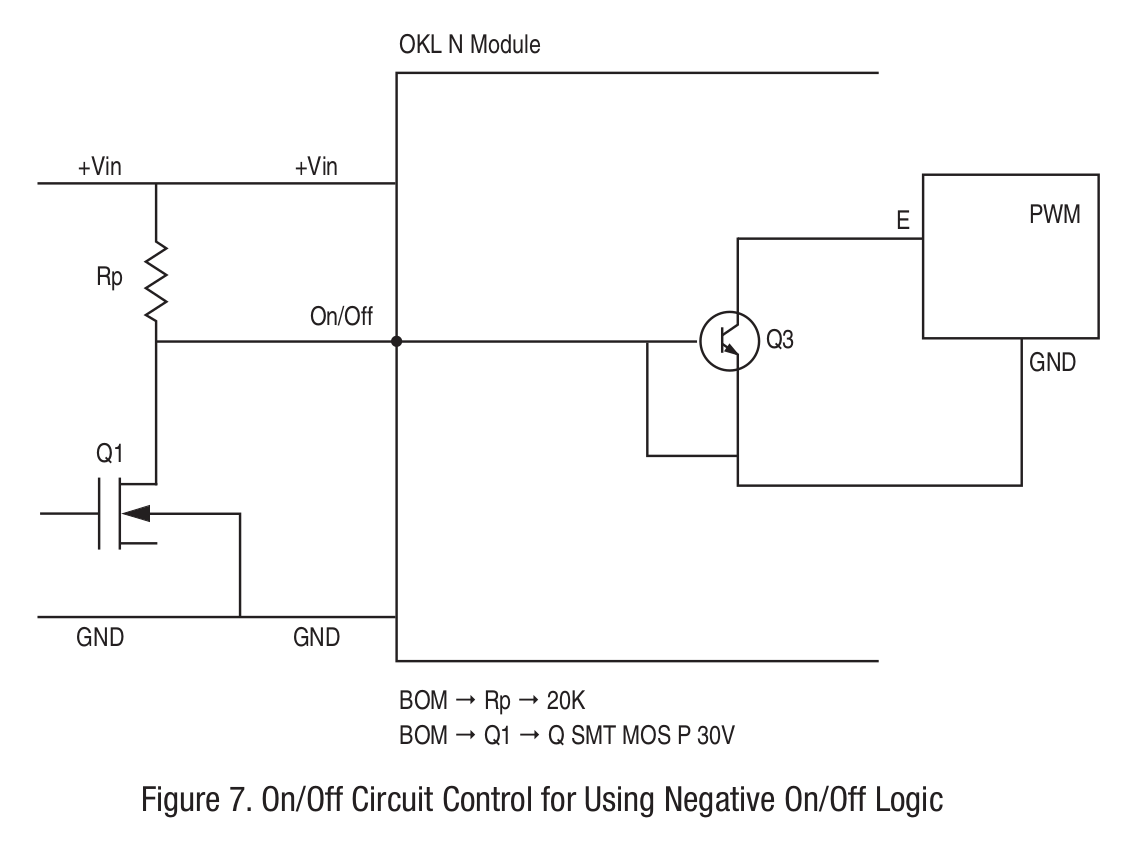 So, level shifting is required if you intend to use standard logic levels (like 3.3V CMOS) to control it.

A depletion N-Channel MOSFET has a negative threshold voltage, it is ON with Vgs=0V. However, it is still N-Channel, which means in order to turn it OFF, you need Vgs to be below the threshold, which means a negative Vgs. I don't think this is what you want, if your control signal is standard logic, it will be positive.

So the simplest solution is to use 2 transistors to invert the signal twice and level-shift it. They can be bipolar or FET. Since the datasheet specifies an iternal pullup on your DC-DC it would be like this:

I used BJTs because your 32V max input voltage will blow the gate of most FETs, so they would need extra components to limit Vgs. I added a pulldown on the input too. This is not necessary if the input is connected directly to a logic circuit, but if it is a connector it is better to have a pulldown to avoid spurious turn-on if a foreign object (ie, a finger) injects some tiny current into the base of the transistor...

in the datasheet for the ABB ABXS002A3X41-SRZ module (fig. 27 on page 11), for example, there is a N-channel/enhanced MOSFET in the circuit. Is that because the max Vin in this case is only 16V? which means that a 2N7000 could be used directly here, as its max Vgs is 20V continuous?

In the ABB case fig 27: FET gate is connected to ENABLE signal you provide -- thus you must pick a FET that is compatible with the logic levels of your ENABLE signal, it must fully turn ON on a logic high (5V or 3V3 etc). In this case it is up to the circuit that generates ENABLE signal to ensure Vgs will not exceed 20V. If it comes from a logic circuit, or a switch from the 16V supply, no problem.

Similar thing in the datasheet for the Murata OKL-T/6-W12 module: Fig. 7 on page 15 shows the P-channel/depletion setup

The schematic shows a weird MOSFET symbol with incorrect connections and a short between base and emitter of bipolar transistor Q3... ie, this schematic is most likely wrong, don't look at it, follow the instructions in the text instead!

15
Is there a popular small signal PFET equivalent to NFETs 2N7000 or BS170?
1
Help driving 9V circuit with a 5V RTC clock interrupt pin (active low)
1
AVR to drive 12V 1A motor
0
Mosfet for switching a step-down for a 12V fan
1
Is a gate resistor needed on a 2n7000 mosfet when driven by a 4543 BCD for multiplexed led display?
1
MOSFET current source / current limiter request for review
6
Current limiting solution for pocketqube satellite
0
Is it possible to control DC-DC boost convertor by N-ch MOSFET @ Vin-?
0
Using MOSFET to turn off the circuit