Why do we need to use transistors when building an OR gate?

Why do we need to use transistors when building an OR gate? Wouldn't we be able to achieve the same result without transistors at all, just by joining the two inputs and reading the output?

What you describe is called a wired OR connection. It is possible in some logic families, particularly ECL (emitter coupled logic), but not in the most common ones (TTL and CMOS).

So if you tied two CMOS outputs together and one output high while the other output low, you'd have a very near short from VDD to ground, which would draw a large current and likely overheat one or the other of the two chips involved.

For TTL, there's a similar issue, but the "shorts" from the output pin to VDD or ground aren't quite as near short as they are in CMOS.

There's a variant output style, called open drain for CMOS or open collector for TTL, that allows wired AND connections rather than wired OR. These outputs are designed to only be able to sink current to ground, not to be able to produce any output current when they're nominally in the high state. These are normally used with an external pull-up resistor so that the output voltage will actually reach the "high" voltage level when required.

this lets you "join the outputs" 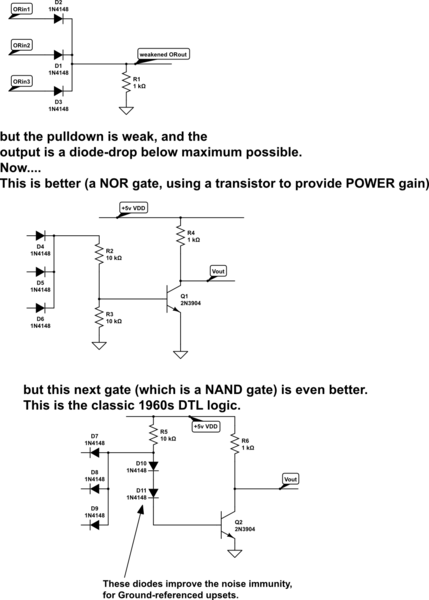 If you just connect the wires, you'd have the (fairly likely) possibility of a 0 and a 1 together. Since a 0 is gnd, and a 1 is 5V (depending on the chips, but it's a standard), you'd have 5V and gnd connected together by wires. The term for that is a short circuit!

You could use diodes for a simple OR gate. Or even resistors. The problems occur when you connect this gate to other gates, other circuitry. You can build an AND gate from 2 diodes the other way round. But if you try connect a lot of them together you end up with one giant circuit that doesn't function as small separate parts, but as one big one. Connections that aren't in your simple gate plan, might crop up in real life, messing up what you want to happen.

A transistor lets you separate the input from the output. The output of a transistor can't feed backward and affect it's input. A relay would be another alternative, though slower. Since the switch can't affect the electromagnet.

Early logic was RTL or DTL, resistor-transistor logic, or diode-transistor logic. Resistors, at first, then later diodes, were used to form the gate, then a transistor acted to buffer the result so the next gate you used didn't feed back through this one to it's inputs.

Now, since transistors on chips are virtually free of charge, financially that is, we have the luxury of everything being properly buffered and separate. Usually that's what we want. TTL logic!

Consider what happens if one input is high and one is low, and you connect the two inputs. It depends on how you build your logic gates.

You don't need transistors for the inputs, just for the output to check the voltage and restore a 0 or 5 volt logical result.

This might be used for an analog neural network node with a non-linear output function that has a "soft" result that might not be entirely true or false.

With some logic elements (all car door swithches ighting up the same lamp) this is possible, but not for example with CMOS gates as they are built with P and N channel FET transistors so they need defined high and low voltage input to provide the output, the input cannot be left to float. Connecting CMOS outputs together would not work.

Not the answer you're looking for? Browse other questions tagged transistors digital-logic logic-gates or ask your own question.