What is the impedance of the following circuit if the switch operates at the same frequency with the input voltage.

Since the switch introduces non-linearity to the circuit, how can I calculate the impedance? 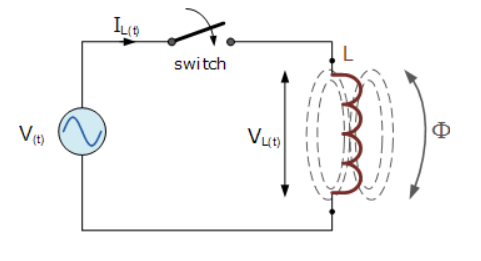 The "transfer" function of the switch consists of a sequence of shortcuts of a virtual infinite resistor R. The total impedance is R +sL, s is the complex frequency. R is shortcut or non- shortcut according to the positive and negative step functions. In other words, R is toggled between 0 and infinite.

But here is an important fact: The shown theoretical circuit can only exist, if and only if the switch is only switched off if the current I is zero.

If the switch is "switched off" when the current I is non-zero, it results in a contradictional circuit. The contradiction is as follows: In this current loop one element makes the current steady, but the other element makes the current non-steady, both by definition. If any inductivity with a non-zero current is "switched off", the current MUST continue to fulfill the steady condition, i.e. I(t0-) = I(t0+), t0 being the time when the switch is operated. But a switch's function is defined as I(t0-) <> I(t0+) for any non-zero current.

So it is a mathematical contradiction eo ipso if the switch is "switched off" for a non-zero current.

Of course, in reality, there are free-running diodes (which must be fast with low threshold), (stray) capacities, non-perfect switches (e.g. with defined sparking) etc. which are eliminating this contradiction.

You are using the wrong tool for the wrong problem!!!

The impedance doesn't make any sense for lumped elements when they aren't in steady-state! It is a different story for transmission line because delay are introduced.

The problems you show is clearly a Transient problem. The correct tool to analyze this type of problem is the Laplace transform (which is the general case of Fourrier/impedance) or differential equation in the time domain.

Rules of thumbs to analyze a circuit:

Impedance : Steady-state only! Even for short-circuit current computation using the impedance will give 0 insights on the transient nature of the systemm, it will not protect you from a nasty resonance in your system if they are present.

As for your specific question when you introduce non-linear component like power electronics or saturation in transformer, the most efficient way to analyze these system is to use a numerical computation of the differential equation with a software like EMTP-RV.

In pratice, impedance & Laplace are nearly useless for details analysis of non-linear system because it is very difficult to convert back from the Laplace/Fourrier domain when the system isn't linear. The best usage of these tools for non-linear system is to develop an "average" model that doesn't capture all the same details but give you enough information at the fundamental frequency.

Not the answer you're looking for? Browse other questions tagged power switch-mode-power-supply power-electronics or ask your own question.

8
What does frequency foldback do in a switching regulator?
0
AC Power loss of inductor in a buck converter
0
What should the switch pin output of an SMPS look like on a scope
4
Induction cooker - highly irregular power transfer curve
3
Benchtop power supply current limit on MC34063 switched-mode power supply
1
How can we use the same charge-pumps circuit for varying input voltage?
1
(THEORY QUESTION) If a diode was not placed in a buck convertor, when the switch is off would the load still be powered on?