What are the bottom group of diodes for on BLDC motor control circuits?

I'm studying the control circuit for a BLDC motor and I can't figure out what function the diodes serve that I point to in the basic diagram. What are they for? At what point in the basic operation of the motor would current need to pass through them and bypass the transistors they are bypassing? 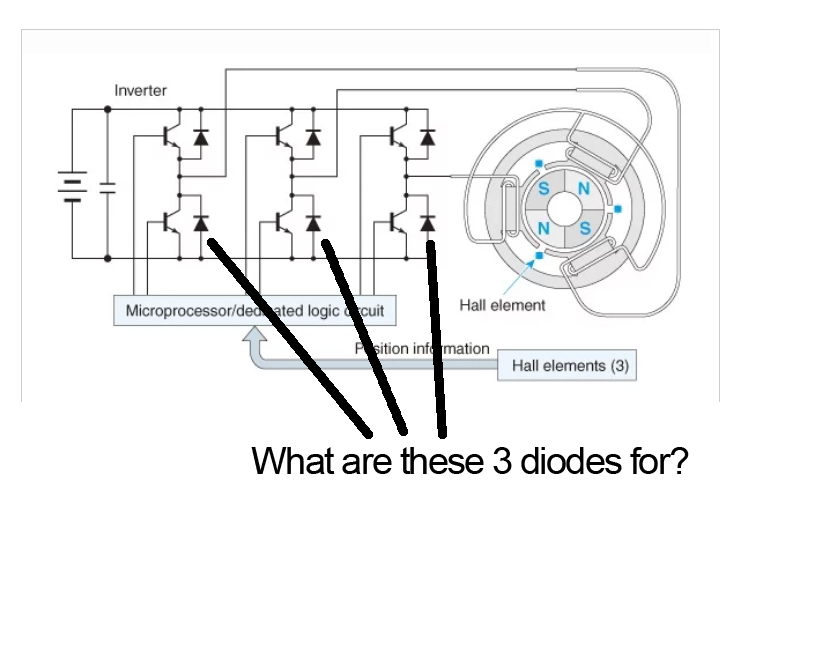 Well, you don't seem to have the same problem with the upper diodes. After all, why would they conduct? For the same reason that the upper diodes conduct, the lower diodes are there for the return current path back to the motor and, the usual reason is when the transistors are off and the motor is freewheeling and generating voltage. Both upper and lower diodes protect the transistors from reverse current and dump the energy into the battery and bus capacitor.

Rotation control of the motor depends on polarity of each 3 windings in a 3 phase Delta mode of ABC or CBA. Both the independent and complementary switching modes can work in bipolar or unipolar mode. Independent control uses the lower switches for PWM to reduce the average voltage for low RPM startup to reduce current. Complementary switching of 2 transistors uses PWM on both high and lo side.

As each switch turns off Hi or low side the back EMF during deadtime of commutation (open cct) tries to produce a higher voltage in the opposite direction with the same current but passively clamped by the opposing (hi/Lo) switch diode to its respective rail (hi/Lo) thus protecting that transistor from reverse voltage on the emitter (hi) or collector (Lo) connected to its rail. The object is to snub the current during the deadtime between PWM pulses in order to allow ShootThru of conduction on both high side transistor and low side diode or visa versa to squelch the voltage in that phase just prior to commutation of current at some average PWM voltage.

If there was no load, the BEMF of generation would be the same as the forward EMF to drive the motor. But when under load the current switch determines the resulting voltage V=LdI/dt and since the current drops, the voltage changes direction.

The bulk resistance of both the transistor and diode are somewhat related to their power handling size Pmax @85’C continuous such that Rs =~ 0.5/Pmax (+/-50%) and the winding inductance , L produces a decay time Tau=L/Rs which must be less than the deadtime.

My understanding now: back emf (generated by the magnet of the rotor passing the inductor coils of wire windings in the motor) flows through the motor wire line, over to the positive line of any of the positive wire paths heading back up to the motor, and into the inductor winding of any of those wires if they happen to be switched on - and if none of them are switched on, it can alternatively run that current over to the battery or bus capacitor next to the battery and that battery would be its load in this case and it would charge that battery and then pass through the load on its return path, come down the ground line and flow through one of the low side mosfet diodes and up one of their wires and back into the motor, entering the most negatively charged motor winding it can find which will act as its ground terminal (so the motor, since it is acting as a generator in this situation, we can visualize as being like a battery that also happens to have a higher voltage than our battery pack and so it flows to our battery pack from its positive charge induced winding - which we can visualize as being like the positive terminal of a battery, it will travel over to our battery pack, which we can visualize as being like the load of our battery, it will charge our battery pack some, then on its return path it will pass through one of the ground low side diodes and it will re-enter the motor - it will choose the diode leading to the inductor coil within the motor that has the lowest charge at that point in time or the most negative charge whose potential is lower than the origination of the current we are describing - so anyways, it will pick that path and enter that negative or low charged inductor winding - which is really the ass end of the origination inductor winding and it will neutralize there and end the cycle - the place it neutralizes we can visualize as being the ground terminal of our battery analogy - and so the excited inductor’s journey ends and the full circuit has been completed and thus both the high side diodes and the low side diodes all had a important purpose in giving that surge of power coming from the rotor passing the inductor winding a place to go which prevents that from just getting really big and causing undue stress on the mosfets who would feel that force surging against them all the time were we not to have given it a path to dissipate on with our diodes.

Not the answer you're looking for? Browse other questions tagged motor diodes brushless-dc-motor or ask your own question.