Is there any reason nowadays to use a neon indicator lamp instead of an LED?

I have a bunch of old neon indicator lamps recovered from old AC devices and used to indicate power status.

I wonder: is there any reason nowadays to use the neon lamps instead of LEDs? I see they are still widely available.

In what cases are neon indicator lamps still preferred?

Neon bulbs use microamps of current when fed through a dropping resistor directly from the AC line. LEDs need 10× to 100× the current and can't be fed AC directly.

You can do many interesting things with neon lamp circuits, all of which are curiosities in 2019 (well maybe they're useful if you need EMP resistance, but I suspect we'll have bigger problems if that's a factor). Neons wear out, for one thing. From the above document: 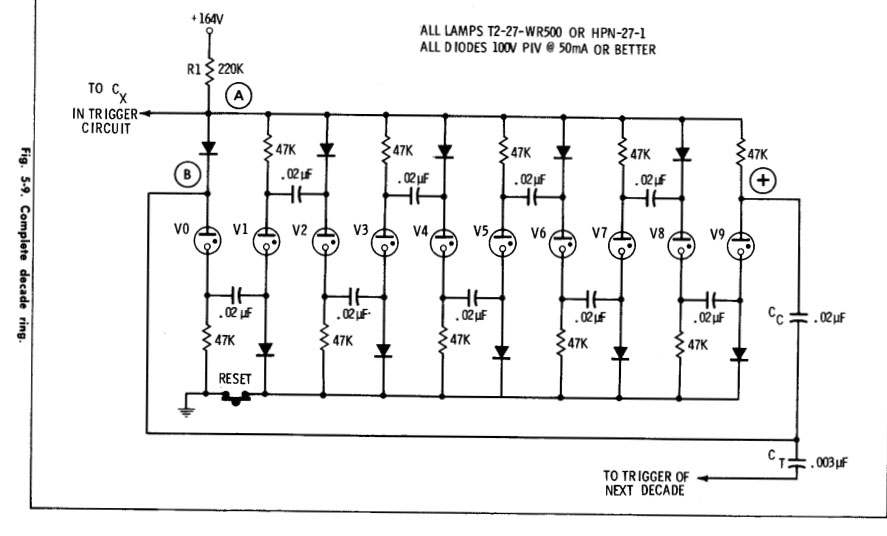 When I were a lad, I designed a monitor system for Linotype machines (yes, that long ago) using a neon bulb oscillator triggering a then-newfangled C106 SCR (in that horrible package with the 0.05" nominal wide leads), to operate a stepper relay with precious metal contacts multiplexing thermocouples.

I don't see any real reason other than to save a few pennies to use neons as indicator lamps. An NE2H runs at around 2mA, which is sufficient to give more brightness from a decent LED (not all packaged indicators use decent LEDs, however). The neons will wear out if they're powered constantly (rated life is 12,000-25,000 hours which is less than 3 years 24/7).

Have a look at this video by BigClive, the light effect (scroll towards end of video to see it) would require a significantly more complex circuit and/or obscure components if you would use LEDs and tried to get the same (random) light effect.

This is the circuit that is used: 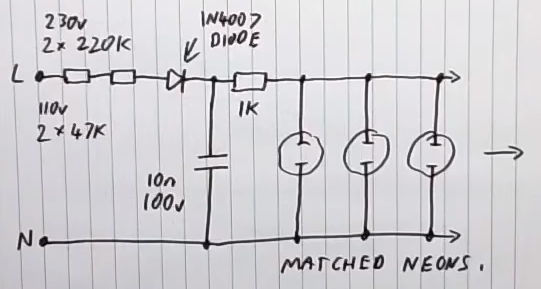 I admit that this isn't a "killer application" of neon lamps but more a fun project.

Not an EE answer but aesthetics.

Although more than just a simple lamp, The Nixie tube was a a popular display in the 50s which was used in various technical instruments like voltmeters and frequency counters. It's revival is in part due to its unique, vintage look. Plenty of examples of DIY hobbyists making their vintage displays.

If your equipment is mains voltage, no low-voltage DC available, a neon is a lot easier. As Dave Tweed said, for one thing the resistor can be smaller. Neons can also tolerate the odd voltage surge, and other out-of-spec conditions. An LED has a delicate and tiny structure necessary to it's function. A neon is just some gas and 2 bits of copper.

Things like kettles, radiators, etc, that are mains-only, typically use neons. If it's cheap garbage from Ebay / Amazon, they might (ab)use an LED cos it's cheaper and they don't care about reliability. But why do they always choose blue?

The need for neons can be related to the industry. For example, equipment that wears out in nuclear facilities must typically be replaced with identical gear, because the cost of qualifying new equipment to operate in the system is so great that it makes no sense to use anything but the old design. If the old design had neons, the replacement typically will too.

The need for neons can also be cosmetic. I build nixie tube clocks for friends and use neons for the colon separating hours and minutes. The color closely matches the color from the nixie filaments, and LEDs just wouldn't look as good.

They also have very low current draw and so are sometimes used as indicators in older designs in emergency power or ride-through applications.

Have you actually tried building mains neon vs LED indicators? I bet you haven't.

Here, try a project. Sometimes, a leg of split-phase or 3-phase AC power will drop out at the poletop. Either neutral gets lost, causing L1 to rise and L2 drop, or a leg is lost, causing L1 to be backfed through 240V appliances. Make a very useful gadget that grabs L1, L2 and N, and visually indicates whether L1-N and L2-N are very coarsely the same voltage, and L1-L2 is coarsely 2x the others. The user switches off breakers and watches to see if that affects brightness one to the other. Having 3-4 lights and having the user watch for differences in brightness is fine. Durability a million hours. Needs to be simple and very low parasitic load, energy budget 720mW (3ma). Go.

However, your point is fair that 99% of electronics innovation is done on the low-voltage side of the wall wart. Neon has no place there; it would need an active circuit driving it, and that compares disfavorably with LED.

Neon and LED are different indicator types for different regimes of electricity. When you argue against neon, you're arguing against mains voltage as a supply source. As a big fan of houses having low voltage DC systems so they can happily exist in power-out situations without generators or inverters -- I can't really disagree.

Most regular LEDs have about 2 Vdc drop in forward mode and need about 1 mA to light up. although 10 mA is recommended with standard LEDs.

In addition, they can only withstand about 2 Vdc in reverse mode, which means that they need a rectifier diode in series to protect them when the ac voltage changes polarity.

In this configuration, the LED lights up only half of the time, which may reduce its brightness; this could be good or bad depending on the application.

Neon lamps are not that bright and in certain applications may not stand out when lit, especially in highly lit areas.

With time, neon lamps develop flickering and electrode polarization (only one of the electrodes glows).

Neon lamps are available in various base sizes (see https://www.bulbtown.com/neon_lamps_and_light_bulbs_s/909.htm). Some even come with an internal resistor sized for a specific operating voltage.

The current requirements of a Neon are low enough that they can generally be driven directly from the mains with a simple and cheap series resistor.

If you try to drive a LED in a similar way you have at least two problems.

If a device is intelligent enough to have a microcontroller on it then LEDs generally win out.

Several answers have already discussed the technical reasons, but they don't discuss the applications where those reasons would apply.

As a result, industrial applications using these higher-voltages (note that ANSI still considers 480V a "low-voltage") can save power and cost with appropriately sized neon's. (Sure, it's minimal savings, but typically you need a reason to change something, not keep it the same.)

There are some other curious aspects of industrial systems that generally hold true as well:

When these aspects are considered, it should make it easier to see why a good chunk of (especially older) industrial-grade equipment would prefer neons to LED's. Especially when considering that if a neon "dies", it's often just extremely dim (vs. completely off as an LED typically is) so it still has minimal functionality.

As an example and anecdote, when I was building the glass manufacturing machines, one feature our machines had was that when plugged in, there was an indicator system that told you if the 480V outlet you plugged into was wired properly. It was extremely cheap to build with Neon's (a few lights and resistors), but would have been slightly more costly (and complex) to build with LED's. (Sure, considering the cost of the machine it was barely noticeable so who cares, but we had no reason to use LED's there and this system has been used by the company for decades, so why spend extra time and money designing a new one?)

Source: I used to maintain and build industrial machinery for a plastic injection molding facility, and a glass machine manufacturing facility.

The reality is that in today's electronics there are not the voltages present for neon operation. And there are for LEDs.

This is a very niche use, but some neon lamps can be used as logic elements due to the voltage difference in the striking vs maintaining voltages.

You can read about somebody using this, rather than a microcontroller, to control a clock:

Not the answer you're looking for? Browse other questions tagged indicator neon or ask your own question.

8
Why have a small neon lamp in power supply input circuitry?
5
Do standard white LEDs produce a full spectrum of light?