I'm working on converting TTL S/PDIF to Coaxial level (0.5Vpp). I have implemented the following circuit using a Toshiba TC7W04, which is a 74HC04-type inverter: 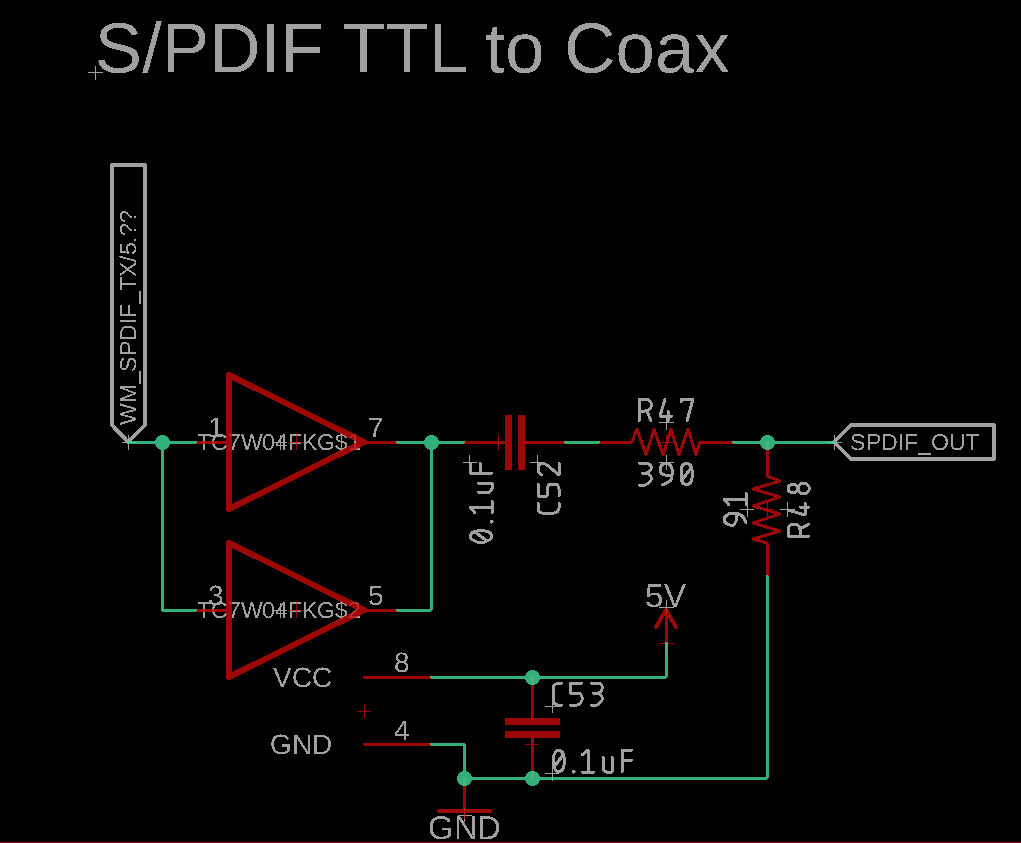 But it does not appear to work in practice (I am working on getting access to a scope to look at the actual signal).

The source devices that I have tried are a Cirrus Logic WM8804 and a Sierra Wireless BC127 (CSR8675 Internally).

Interestingly enough, I did find a schematic (pictured below) from CSR on converting their TTL S/PDIF to Coax, but I'm not sure what kind of inverter is in use:

The other answers missed the obvious, so here we go.

Then, you use TC7W04, a 74HC-equivalent chip powered from 5V. Its inputs are not really compatible with LVCMOS 3.3V, which is why it does not work.

Then we have a resistor divider which brings the output level down to +/- 0.5V.

Solution #1 is straight from WM9904 datasheet:

WM8804 has a SPDIF output, and it is designed to drive a coax if you use the resistors specified in the application schematic which is provided... No need for extra complexity. Resistor values create a 75R source impedance and the correct voltage levels. This will work just fine with any chip that outputs 3V3 LVCMOS SPDIF.

If you want an exact 75R source impedance you'll need to adjust resistor values taking into account the exact output impedance of the chip. This is not likely to matter in practice.

If you want to use a buffer, then it makes sense to use a chip powered from 3V3. Its input will be compatible with WM8804 output levels. You can use a 74LVC chip, for example. I wouldn't use 74HC powered from 3V3 as it will be a bit slow. Insert the buffer between the output of WM8804 and R8 in the above schematic.

You can probably use your existing board. Simply power your buffer chip from 3V3 instead of 5V (ie, cut the 5V trace and solder a wire to 3V3 instead) and change resistor values. The buffer should have adequate decoupling. If you're a perfectionist, add a ferrite bead in the supply line.

Note if the receiving DAC sucks at rejecting jitter, it will sound better with a higher value for C6, like 1µF.

1) It is a CMOS inverter, it works poorly when supply is 5V but signal input is not 5V but 3.3V. Another thing could be output drive strength. It is also not ideal to parallel outputs - at least not directly without series resistors. 72 ohms is of course not perfect but within 5% so that should not be an issue.

2) No, not really. But the resistances would suggest it does not use 5V supply, but perhaps 3.3V. If you have a reference design BOM you would know the inverter type.

3) Three gates in parallel can drive more current than one or two.

Or is the polarity wrong? Nope. Since it is presence of a transition is important, not the polarity, for BiPhase Mark.

Don’t be fooled by driver specs at Vol, Voh intended to be logic load std. levels or even the max current when used for non-std. analog applications.

** Although I’ve never used S/PDIF what seems to be wrong and easily overlooked is the Average DCbias level. **. All schematic I have seen show the transmitter, Tx has 75 R then a series 100nF cap. Some Rx’s may have the same 75R termination to 0V then a series 100nF to CMOS IC. The effects are quite different as the CMOS IC is high impedance and self biased to Vdd/2 or self biased with negative feedback.

Not the answer you're looking for? Browse other questions tagged audio inverter spdif digital-audio or ask your own question.