Does increasing voltage increase the torque of a brushless motor?

1.) I have a brushless motor with testing data at 12V. I want to know if I increase the voltage supply, will this increase the torque?

In my research I keep seeing "current controls torque, and voltage controls speed." But that doesn't seem quite right. Let's say I have a theoretical electrically powered unicycle that is weighted. With a 5V source and 2A, the motor can't move the unicycle. But now I increase the voltage to 10V, and I believe current will also increase by x2 if resistance is constant (V = IR). So now the torque increases and the unicycle can move itself. It that a reasonable sequence of events? Can I say that increasing voltage increases torque?

In my research I keep seeing "current controls torque, and voltage controls speed." But that doesn't seem quite right. Let's say I have a theoretical electrically powered unicycle that is weighted. With a 5V source and 2A, the motor can't move the unicycle. But now I increase the voltage to 10V, and I believe current will also increase by x2 if resistance is constant (V = IR).

In the situation where the motor is not yet turning, doubling the voltage will indeed double the current and double the torque — because the voltage is acting against the resistance of the wire in the windings only.

But the winding resistance is only an inefficiency (it turns input power into heat, not motion). In addition to the resistance, a motor exhibits a phenomenon called back-emf where it generates its own voltage (acting as a generator) when it is turning.

At zero speed, the back-emf is zero, and the applied voltage is unopposed and the maximum current flows. (This condition is called “stall”.) As the motor speeds up, the back-emf increases, and thus less current flows because there is less of a voltage difference. Think of it like charging a battery or a capacitor - when the internal voltage is low, the current is high, and as it charges (as the motor increases speed) the current decreases (unless the applied voltage is also increased).

(This description is most simply applied to a brushed DC motor, but a brushless DC motor acts generally similar if you consider the motor and the motor controller (at its simplest, an electronic replacement for the mechanical commutator) as a unit.)

To summarize: "Current controls torque" — or more precisely, “current is proportional to torque”, since the motor is a bidirectional system that can equally well generate current if there is input from the mechanical side — is true all the time. "Applied voltage controls torque" is the whole story only when the back-emf is zero, when the motor is stopped.

\$P = VI\$ is not wrong, but the \$V\$ here is the difference between the voltage source and the back-emf, so \$P\$ depends on the speed, not just the voltage.

Another way to think about all this: consider a simple non-speed-controlled motor that's turned on and “up to speed” with nothing attached to the shaft — no load. We know from practical experience that such a motor does not waste enormous amounts of power, only get a little warm compared to a motor driving a big load. There is a significant voltage applied to its terminals, yet there must not be a large current (if there was, there would be power going somewhere). The reason there is little current is because the back-emf is nearly equal to the supply voltage.

Here's a simple simulatable model: the current through the "winding resistance" is 0.1 A, but if the motor were not turning, the back-emf (modeled as the voltage source labeled Vemf) would be 0 and the current would be 1 A. 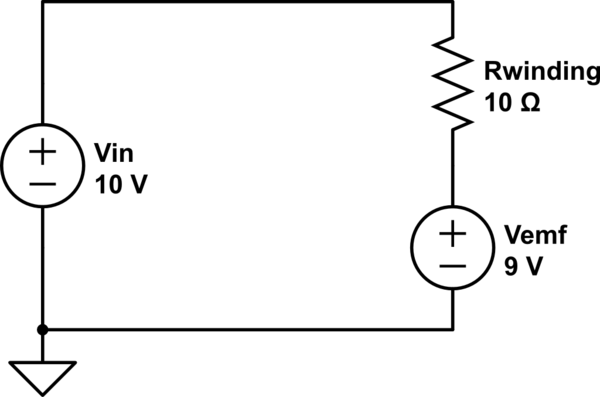 Not the answer you're looking for? Browse other questions tagged voltage brushless-dc-motor torque or ask your own question.

0
How can a BLDC motor respond to a specific dynamic load demand without changing the supply voltage?
1
What happens to the torque/speed curve of a brushless motor when I increase the voltage?