The “Electronic Devices and Circuit Theory” book (by Boylestad, Nashelsky) gives a brief description of a random noise generator circuit at the end of “BJT AC Analysis” chapter. (Btw, exactly the same circuit appeared in the IET magazine, April 1976). 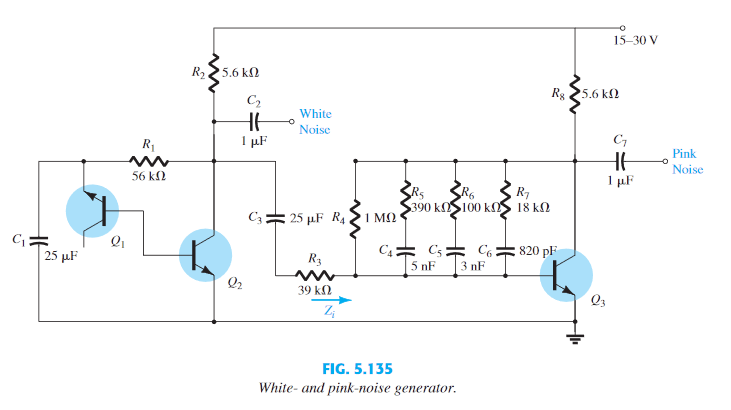 At a sufficiently high frequency all the capacitors could be replaced by short circuits, and the total resistance combination between collector and base would be reduced to about \$14.5 k\Omega\$. which would result in a very high unloaded gain of about \$731\$, more than twice that just obtained with \$R_F = 1 M\Omega\$. Because the 1/f filter is supposed to reduce the gain at high frequencies, it initially appears as though there is an error in design. However, the input impedance has dropped to about \$19.33 \Omega\$, which is a 66-fold drop from the level obtained with \$R_F = 1 M\Omega\$.

AC at some high frequency:

If we simplify the source to be R2+R3 and neglect the effect of R8 for an intuitive analysis, we see the impedance ratio as the maximum voltage gain if the transistor was an Op Amp with infinite gain.

Let's assume a frequency well above all the RC breakpoints to neglect the cap impedance. This is a negative feedback (NFB) transistor amplifier where the open loop AC gain is reduced by the ratio of the Rf/Rin.

Symbolically below. The gain values were verified by simulation for the cases of 390k open and closed below. 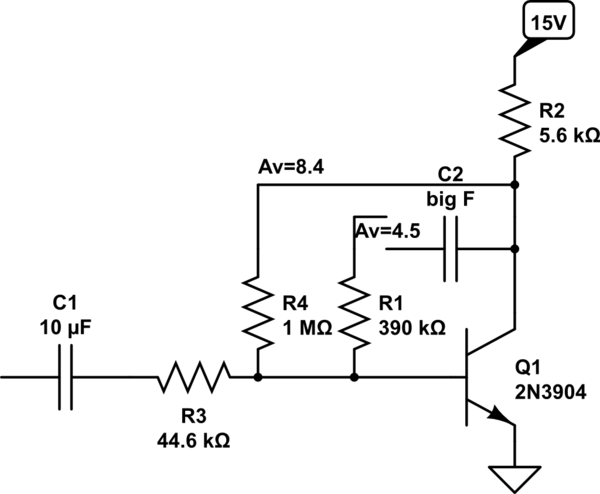 Graphically as follows using BODE asymptotes and the intersection being the breakpoints using an RLC Impedance Nomograph shows that the frequency response is almost half order where 1st order is 6dB/octave or 20dB/decade or a slope of 1 order of magnitude of impedance per decade of frequency. 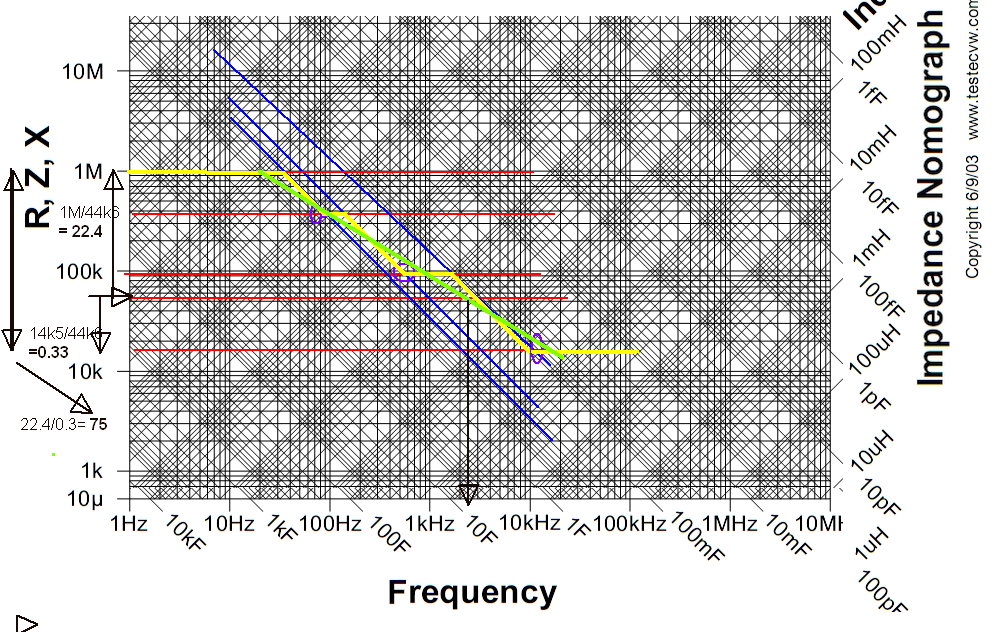 Although I'm purely guessing here, I might found a culprit that misled the original authors.

Wrong assumption: reduced \$R_F\$ at high frequencies is seen as pure resistance by both dc and ac signals:

KVC along the feedback branch...:

(Using the simplified formula is actually not appropriate as the condition \$R_F >> R_C\$ is not (fully) met.)

Not the answer you're looking for? Browse other questions tagged bjt noise analysis function-generator negative-feedback or ask your own question.

5
Designing yet another BJT amplifier given some constraints
4
Av for small signal analysis with BJT for unbypassed emitter and ro in place
4
Help With Simulating Common Collector Amplifier In PSPICE
1
Solar controller with BJT transistor and PIC24 microcontroller to charge 3.6V NiMH batteries
4
What is the way to calculate the Voltage gain of cascade common-emitter BJT amplifier?
5
BJT Voltage Divider Bias Circuit problem
2
Voltage divider bias (BJT) leads to a huge voltage drop across the collector resistor. Why?
4
Cannot predict closed-loop gain of this amplifier
0
Apparent contradiction in AC analysis of BJT amplifier