... and then I stumbled upon a document that implies that library footprints should be oriented exactly as the components on a tape. Which, unfortunately, is often different for different manufacturers. Not only that, but the EIA-481 standard itself changed orientation between -C and -D revisions, prompting some manufacturers (e.g. IDT) to issue bulletins notifying customers that they will stick with older revisions of the standard for the time being.

Now, this does not make sense to me. It basically means that I should know in advance the position of the PCB relative to the tape. Which is far fetching, considering that automatic panelization often rotates PCB to fit more of them.

Finally, what blew my mind completely, is that various sources seem to disagree what quadrants really mean. The EIA defines them like this:

Some manufacturers, like Analog Devices, define them like this: Not to mention that neither corresponds to 300 years old Cartesian system...

When I asked the manufacturing house for the clarification they replied with "use EIA-481 for zero component orientation, and use the IPC-7351C to design the size of the pads." With all the standard changes and discrepancies this basically tells me nothing.

So, should I really redefine packages in KiCad according to each manufacturer, losing an ability to quickly change suppliers of the same part? Or should I just go ahead with built-in packages and hope the house will figure it out somehow?

Just received the boards and wanted to give a quick update. It looks like the comments by The Photon and others were right on the mark - the shop did not have any problems with orientations and placed all components exactly right.

I did not adjust anything to manufacturer-specific tape orientation, simply used footprints from KiCad libraries where it was appropriate. For my own footprints I followed IPC-7351C orientation guidelines, pretty much leaving the shop to deal with EIA-481 discrepancies. Of course, it could be I got lucky and the suppliers I've used in BOM simply happen to use compatible orientations.

You all might be interested in how a feeder is configured in a Pick-and-Place machine. Below is a screenshot for a Samsung CP-45, which is a respectable PnP of the early 2000's, so somewhat older, but what it has to deal with is representative. 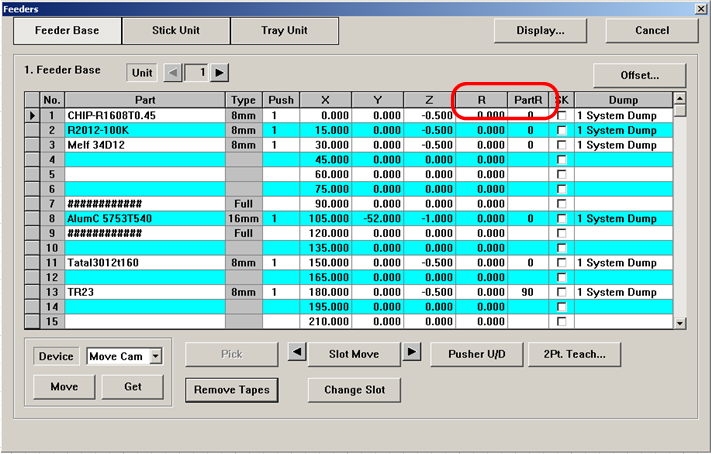 Each row in the table is a feeder position, and you can see it lists what Part is to be fed in that position, and the exact X and Y coordinates at which the nozzle should pick up the part. Also a vertical position (Z). But most salient for the current thread, there's a "PartR" column. This tells the machine how much it must rotate the component to get it into "The" standard zero orientation, (as portrayed on a config screen for the component or package).

This PartR configuration item allows you to accept parts on tape reels, or in "sticks" (tubes), or on trays. Each of these may supply the part in a different orientation, and it may vary from one tape to another. So it's up to the PnP operator to fill in PartR to bridge the gap between supplied orientation and the PnP's standard zero orientation.

In principle, the PnP manual, or the board house, should be able to tell you what "standard" the PnP follows for its zero orientations, or what those orientations are for specific packages you're using. (Conceivably, an alternative workflow would be for the PCB designer to provide to the board house a reference declaring the zero orientations assumed for each component or package. In practice, they may just eyeball the actual board.)

In practice, some of these "oughts" are easier said than done, possibly motivating changes in the upstream PCB library to compensate for missing downstream steps, like hassle of post-processing the placement data, or PnP operator who doesn't understand how to configure feeders.

But assuming an up-to-speed board house, the PnP software (and operators) already have to take care of accommodating components delivered in different formats and at different rotations. Not to mention the PnP has to do the right thing if the feeder is mounted on the feeder slots on the back of the machine, where it's rotated 180 degrees.

Hopefully that sheds some light on the matter!

(By the way, in the screenshot, there's also an "R" column. The manual describes it as something to do with rotation, but the translation from Korean is incoherent. Regardless, it doesn't appear to have any effect that we could determine through experimentation.)

I agree with you: standards and practice are not inline with each other. I have done quite some investigation on this myself.

Yesterday, I verified an online tool of a PCBA manufacturer that allows you to check and correct the component orientations online. There were quite a few orientations that were incorrect while the footprints definitions have the correct designed orientation according to IPC-7351.

Even if various sources disagree with regards to the orientation of the quadrants, what is important is that quadrant 1 is the upper left.

The manufacturing houses that I consulted with regards to the design rules said that they can pretty much do anything - but they do not tell you at which cost!

If you can, you should define your footprints according to the actual orientation on tape. In practice you do not really have to care too much, the manufacturing houses are used to the fact that there are many discrepancies. The built-in footprints in KiCAD generally need some rework anyway if you want to have a better fabrication layer for instance. I prefer putting in some time up-front, which avoids most of the placement errors to finally correct only a few.

Not the answer you're looking for? Browse other questions tagged pcb pcb-assembly or ask your own question.

16
Designing Pick-and-Place-friendly CAD library parts
4
What is the proper zero orientation for a SMT LED?
3
How should I design a schematic component for a component library?
19
What initial orientation do pick&place machines use when applying the "rotation angle"?
11
How approach breadboard layout using KiCad?
0
import PCB components into KiCAD which are sold in the electronics industry
2
Maximum allowable voltage between PCB traces
2
Incorrect orientation of components in Footprint Position File (KiCad)
1
KiCad footprint or supplier footprint?