How to limit maximum voltage when it's 0.1V too high and the device controller complains?

I built a retrofit Li-Ion battery pack for a scooter that originally ran on two 12V SLA batteries in series. I measured the voltage of the original SLA charger during the CV phase and it measured 29.3V. Therefore, I built a 7S4P pack, considering that its 29.4V charge voltage is only 0.1V higher.

The problem is that after the Li-Ion is fully charged, when I turn the scooter on, it emits a beep error code which corresponds to "voltage error" in the manual. I measured the battery voltage and it was 29.35V.

The thing is, this is so close to the operating range of the scooter. In fact, if I power on the scooter and QUICKLY start moving, the motor will kick in before the voltage warning happens and I can move around just fine (the load pulls the voltage down just enough), and if I then keep moving for a little while to get that top of the voltage off the batteries and they drop to around 29.3V, then everything is fine. (If I stop too soon, the voltage shoots back up to 29.35, and the voltage alarm goes off and the scooter disables.) It appears the motor controller has a particularly sensitive upper voltage range, since the SLA batteries do read around 29.3V after a full charge, but the 29.35V is enough to cause it to decide the voltage is out of range.

I've considered these options, but I'm at a loss for which option would be easiest to implement, would be the safest with the least amount of inefficiency losses, or just what would even practically work at all.

It's particularly annoying that the scooter controller is the thing limiting this upgrade. I know that SLA batteries can actually be charged up to 2.5V (especially in lower temperatures) so putting such a strict top limit on voltage seems a little "overcautious".

What should I do?

The extra 0.1 V or so represents minimal energy in the battery.
A relatively low current drain shunt regulator applied WHEN THE BATTERY IS NOT ON CHARGE* can be used to reduce the battery voltage.

Zeners have a too rounded "knee" for this task and will noticeably dissipate battery capacity needlessly. A current limited shunt regulator using a precision shunt regulator IC will meet the need.

A very cheap solution is a TL431 clamp regulator / "adjustable zener" driving a transistor with a series load resistor to limit current.

Rhyst is optional. When equipped it is a small value R such that
V = IR = I_RLoad x Rhyst is say 0.05 to 0.1 V. When Vin rises to a level that turns ZD1 on, the voltage across Rhyst steps from 0 to say 0.1V, which adds to the voltage on the R2+R1 divider, increasing the apparent Vin value. Thus Vin has to fall to somewhat below the original Vtrip before M1 is turned off. This has the effect of ensuring M1 is fully on or fully off and not in a partially resistive state. This means that clamp current is set by I = V/R = Vin/Rload and that M1 dissipates minimal power when on.

*If the load current through Rload is small enough the circuit could be allowed to operate during charging. 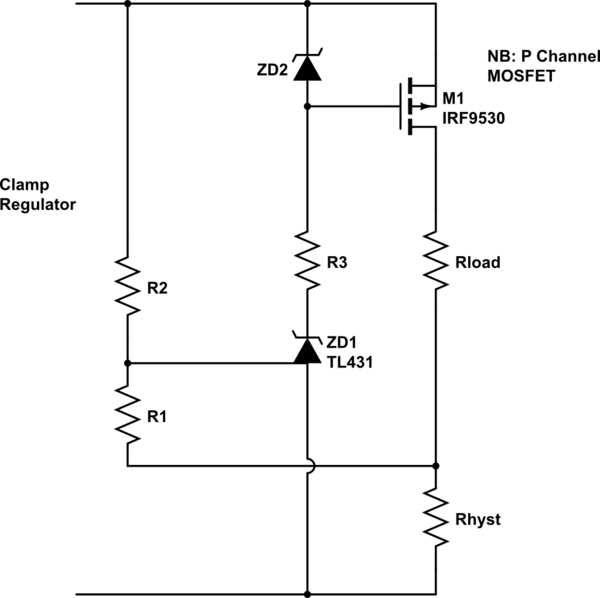 Not the answer you're looking for? Browse other questions tagged voltage batteries resistors or ask your own question.