STM32 send from UART3 and receive on UART2

I thought to create a simple test to send and receive a buffer via UART. I succeeded in sending bytes from my PC to the nucleo bord and receiving them in blocking and non-blocking mode. But for some reason I can't succeed to send data from UART3 and receive the bytes on UART2.

I have a nucleo-f103rb and have the following pins setup:

And then the following code:

All the boiler plate is generated using cube mx. So the UART 2 and 3 are all default, same for the button pins.

What am I missing here?

As comments and answers suggested, I shouldn't be using the blocking mode approach. So I rewrote it slightly to rely more on interrupts.

I attached a callback to the nucleo blue button

And I added a callback for receiving stuff over uart

In the main function I call the interrupt so that the callback is active.

Again, when debugging through I do end up in the button released callback, but the callback on the uart receive isn't triggered. When I send stuff from the PC, it does. So it seems that sending stuff via uart3 isn't working. So I guess that must be the wiring.

But I really can't see what I am missing here, the pins are clearly defined in the pinout here: https://os.mbed.com/platforms/ST-Nucleo-F103RB/.

I hope the photo is clear enough, but this is how I connected them. 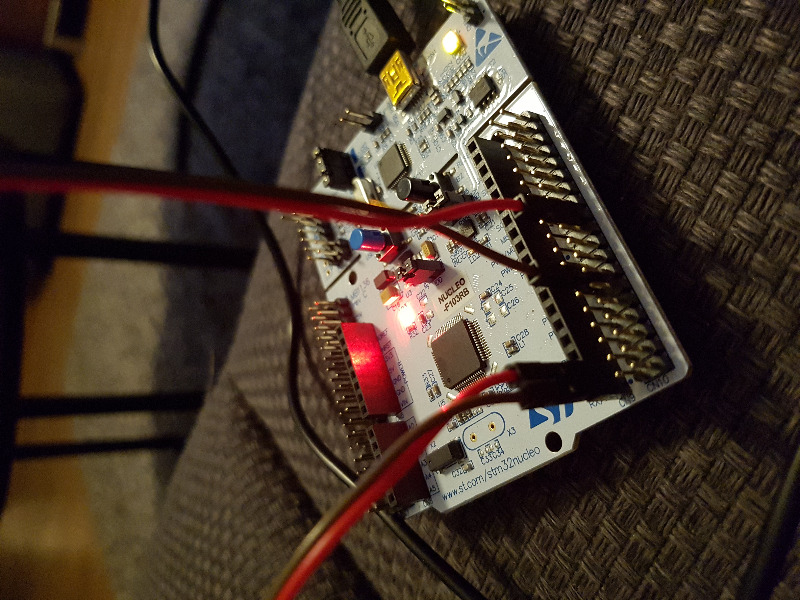 It works just as expected from that code that controls the uarts - first there is transmission out on UART3, and after that is fully complete there is reception from UART2. So UART2 does not see any reception as at that time there is no transmission going on UART3.

Not the answer you're looking for? Browse other questions tagged stm32 uart or ask your own question.