I am trying to modify a Roland SVC-350 that is currently configured for 240V power to run on 120V. I ran into some questions as I was speccing out the transformer that I needed. The full schematic can be found here, but the relevant section is here: 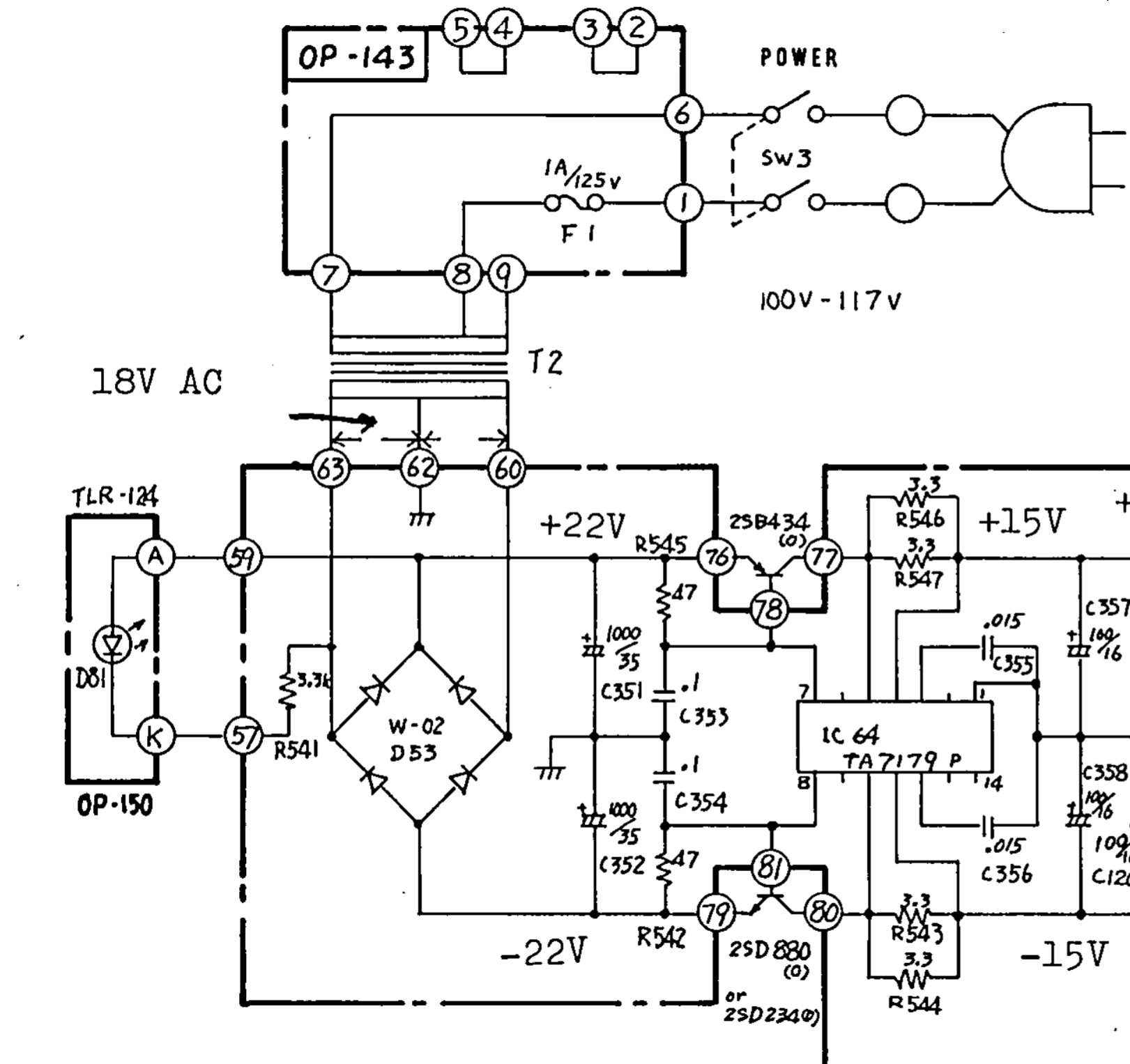 note: The OP-143 fuseboard shown just uses a different cap/fuse combo for the different voltage configurations. Capacitance is the same across all versions (only the voltage rating changes) so I should only need to swap out for the fuse.

The closest thing I could find to a datasheet for the TA7179p is here.

My first thought was that a 120V:35VCT transformer would work fine, as it should generate the spec'd 18V RMS with respect to the center tap. However, the +/- 22V spec doesn't make sense to me. If it's rectified voltage it should be around 16.2 VDC with maybe +/- ~1V of ripple based on the power rating of 8W for the device and those 1000uF caps, minus a diode drop. I don't think it's peak voltage either, as that should be closer to 25V (minus a diode drop) if my understanding is correct.

I admit that I'm not entirely sure the what the function of those two transistors is, though I imagine it's just to act as a current source so the regulator doesn't have to work as hard. They're connected via jumpers and bolted to the frame so I assume they're expected to dissipate a fair amount of power.

My concern is the regulator itself appears to require a dropout of at least 2V, and is designed to work at 20V. So, I'm inclined to believe that I'd need more than 18V RMS to have enough room above 15V after rectification. The next "standard" transformer size of 48VCT would lead to +/- 24V RMS. Those peak voltages get pretty uncomfortably close to the 35V spec on the 1000uF caps though.

So, I see a couple options:

You want to go with the transformer with the 18VACRMS rated secondary.

The rectifier diode will contribute about 1V of voltage drop to the 1000uF filter capacitors. So I would expect the filter caps to see a peak value of ~24.5V.

During operation as the load is drawing power from the filter caps the voltage will discharge the caps by some amount less than the 24.5V peak. It is a very good guess that the average value of the voltage at the filter caps is the 22V as shown on the schematic.

I built a simulation of the transformer secondary and the diodes plus filter capacitors. Then I added a load resistor to each of the outputs. Here is the simulation circuit:

Note that the voltage sources have been specified at a sine wave peak of 25.46V. The two sources have been arranged to be 180 degrees out of phase as you would expect for a center tapped transformer. The load resistors were selected at 22 ohms to represent a nominal 1A load at 22 volts.

Here you can see the positive voltage at the filter capacitor and the current load into 22 ohms. Note the average value of the voltage is almost on 22V as labeled on your schematic.

In like manner this shows the corresponding negative filter capacitor voltage and the current load.

To make your solutions work, it looks like you're at least on the hook to replace the transformer, and that's not going to be a minimally-invasive change. Higher voltages will result in more power dissipated in your regulator transistors, which may lead to premature failure. Instead, get an external transformer to convert 120V AC to 240V AC. This advice is coming more from the "don't fix it if it ain't broke" mentality, but it also seems the best to me.