For a project I have 20 pieces of EL wire that each have their own 3V (2xAA) inverter. Now I think it's a complete waste and hassle to replace the batteries every so many hours, so I wanted to try and power the inverters from the mains.

What I am worried about with just connecting a 3V adapter is that with dropping the internal resistance of the batteries will result in a too high current that will fry the system (like with LEDs), will this be the case? Is there any way to control the current that will flow?

I have tried different resistances with a 6V power source, but I haven't been able to find one that still powers the circuit with 3V and creates a 70-125mA current (this is what I measured the circuit draws when powered by batteries), and I think I have fried one of the circuits so now I am afraid to do more experiments.

Note: an alternative is to get a 12V driver and a 12V adapter from the shop (I think). However, in this way I lose the different settings that come with the battery pack, which is undesired for my project.

Edit: I have tried to split the 6V into 3V according to the following diagram: 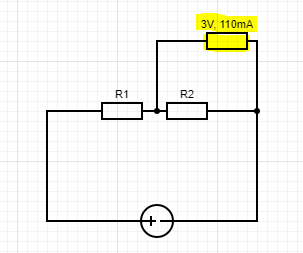 Actually the answer was easy, I thought I tried it but trying again gave different results.

I just put two of the things in series and it seems to work. It draws 150mA but I don't think it is so much of a problem, the circuits seem to be functioning fine. I am assuming putting a 3V/110mA=27ohm resistor in series would also work, but I don't have one laying around to test this.

Not the answer you're looking for? Browse other questions tagged power-supply batteries inverter mains el-wire or ask your own question.

0
Power a device from 12v adapter instead of ac wall adapter
14
Could a modified sine wave inverter destroy/damage the AC adapter for a laptop?
2
Does a 24V inverter consume the same amount of wattage as a 12V inverter?
1
Nichrome wire no heat
0
Issues encountered when adding DC adapter to light powered by battery
0
Wattage of adapter to size my inverter